The Penn Stater's Guide to the NCAA Tournament III

Welcome to TYT's third annual "I'm a Penn State fan. Who should I root for in the NCAA Tournament?" post. To reiterate the rules: this post is not about prediction, serious analysis, or even personal preference (although that does creep into play on occasion). It's simply an attempt to rank the four schools in each of the four NCAA Tournament regions in terms of their relationship to PSU. Sometimes it involves past events, sometimes it involves future implications. Sometimes there's not a ton to go on, and I'll usually drop those schools somewhere in the middle. But if Penn State is your only concern, this is how I think your rooting interests should play out.

Until Penn State has a direct reason (ie. participation) to care about the NCAA Tournament, I'll defer to others for the hardcore stuff. Western College Hockey Blog, for example, has fantastic previews of each region (East, Northeast, Midwest, West), and I encourage you to go over there for further reading.

The winners of each region, of course, will congregate at the Frozen Four, hosted this year by Pittsburgh's CONSOL Energy Center and Robert Morris University on April 11th (semifinals) and 13th (championship game). It's actually the first of consecutive Frozen Fours to be held in the Keystone State, as 2014's edition will head across the commonwealth to Philadelphia.

Finally, before we get started, here are the tournament brackets (interactive and PDF) from NCAA.com.


1. Union. It seems almost crazy now, given what happened subsequently, but I was absolutely pumped by PSU's competitive losses in Schenectady back in November (2-0 and 4-1, with empty-netters in both games). That was at a time when I didn't honestly see a major-conference win coming in NCAA Year One, and suffice it to say, I think Penn State would have a shot at being more than "competitive" today. In last year's version of this post, while discussing the Dutchmen, I said: "It would be pretty cool if the Dutchmen carried something like a Frozen Four appearance from this season into next season's games with the Nittany Lions." And yes, it was. With Union rumored to be making a trip to Pegula Ice Arena next season, I'm saying it again.

2. Canisius. The two Atlantic Hockey teams in the tournament this year both get a bump due to the fact that Penn State was an honorary member of the conference in 2012-2013, going 5-8-0 against AIC, RIT, Air Force, Sacred Heart, Army, Holy Cross, Robert Morris and Connecticut - there's nothing at all wrong with wanting to see the champion of the AHA tournament do well under those circumstances, even if they are up against it with an opening game against top overall seed Quinnipiac. The Golden Griffins also get points for a previous series with the Icers, back when the school played in NCAA Division III. PSU went 2-6-0 in those games, spanning from 1981 until 1995.

3. Quinnipiac. In a weaker region for Penn State interests (see: Midwest), the Bobcats may very well have been number one, due to my new blood bias (hey, we're new blood too, after all). For the little it may be worth now, QU's home TD Bank Sports Center was part of the legendary "get ideas for the PIA" arena tour taken by Penn State leadership, and is generally credited with influencing the "steep as code allows" (finish your drink!) nature of our nearly-complete student section.

4. Boston College. Eef. If you really want to see Boston College win anything (again), go away. If you're still here, it does need to be said that BC's one saving grace is the Eagles' three Pittsburgh natives: starting goalie Parker Milner, stud defenseman Patrick Wey, and freshman blueliner Travis Jeke. Diminutive superstar Johnny Gaudreau, the leading scorer both for BC and for Team USA's gold medal winning entry at this year's World Junior Championships, gets an honorable mention as a Philadelphia-area New Jersey native who played for Team Comcast. The three PA natives are tied with UMass-Lowell's batch as a tournament high.


1. Wisconsin. Do I really need to explain this one? 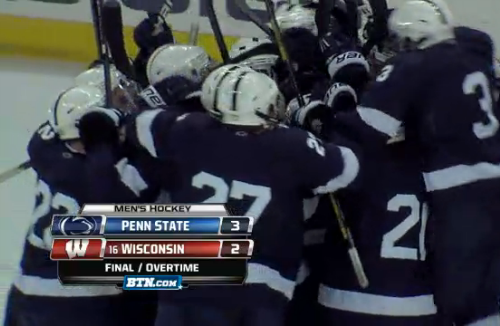 In its first NCAA season, Penn State beat a team that is participating in the NCAA Tournament. The fact that the Badgers are also a Big Ten school, and yeah, "rah-rah, go conference," almost seems like an afterthought next to that. Feel free to extrapolate and call UW the overall top seed - I'll be rooting for them against anyone in the field. Could you imagine if Penn State ended up beating the eventual national champions?

2. UMass-Lowell. Things significantly drop off from a Penn State standpoint after the obvious Wisconsin call, but the aforementioned three Pennsylvanians (defenseman Joe Houk of Richboro, goaltender Brian Robbins of Scotrun, forward Terrance Wallin of Yardley) and the new blood factor give the River Hawks the edge over UNH. Lowell, a former Division II superpower that elevated to DI in 1984, has been thoroughly average since then, but has now made consecutive NCAA tournament appearances and won its first Hockey East tournament title on Saturday by ending Jack Parker's legendary career at Boston University. New blood is fun until it gets annoying (see Union, with Quinnipiac setting a land speed record on the way there), and Lowell isn't annoying yet.

3. New Hampshire. If the Wildcats were to take the whole thing, I wouldn't complain. The school, quite accurately dubbed the University of No Hardware by detractors, is always there - UNH has been to 18 of the last 22 NCAA Tournaments and a streak of ten consecutive was snapped last year - but never wins, and is quite possibly the most storied program in college hockey without a national championship. There's not much on either side of the ledger from a Penn State/Pennsylvania perspective though, other than gigantic (6'6", 225 pounds) defenseman Eric Knodel, a West Chester native and a Toronto draft pick. He was selected when Brian Burke was still the Leafs' GM, although that probably goes without saying.

4. Denver. The Pios have always been sort of a nothing team to me. There's no disrespect intended in that statement, DU's obviously one of the most successful programs in college hockey, I just have literally no feelings positively or negatively about them. What drops them to the bottom of the region, then? They're joining the NCHC next year. I get the feeling that Big Ten-NCHC in hockey is going to be like Big Ten-SEC in football for years to come, or at least until the entire conference structure gets reshuffled again. Except hopefully, the Big Ten will be the better conference at hockey.


1. Notre Dame. It's not an easy call in a region that's absolutely brutal for Penn State interests, but I've always been fond of the fact that once upon a time, the Icers played Notre Dame. The Irish temporarily removed varsity status from its hockey program for a single season, 1983-1984, and scheduled a series in Johnstown against eventual club national champion PSU, with ND taking three points from the weekend. The next season, with Lefty Smith's gang back in the NCAA, the Icers went to South Bend and were swept. Notably, Notre Dame was Joe Battista's second choice of college - try that alternate history on for size, you won't like it - and PSU brass has a good relationship with the school, so you can probably count on the teams meeting at some point. ND's Compton Family Ice Arena was a key influence on the Pegula Ice Arena design as well.


2. Minnesota State. The Screaming Eagles Mavericks could be considered one of the victims of Penn State's entry into NCAA hockey, as next season they'll be going from the WCHA, the toughest conference in college hockey, to... the WCHA, the fifth-toughest conference in college hockey. Normally, I'd point out that under the new setup, teams like Minnesota State, Lake Superior State and Bowling Green might actually have a better shot at an NCAA bid since one of the WCHA "leftover" teams are guaranteed to go via the autobid, but MSU obviously didn't need that to get in this year, so... uhhh... sorry?

3. Miami. I've generally been fond of the RedHawks, as a relative newcomer to NCAA Division I hockey that is now firmly established in the "club" of national powers (in other words, saying Miami is going to be good or is going to win something no longer receives a sneer in response, as it has for PSU, although the Nittany Lions' 2012-2013 results certainly shut a few people up). Eight straight tournament appearances with two Frozen Fours and one almost-championship will tend to do that. From a 1978 start date, the then-Redskins first made NCAAs in 1993, before things really took off once head coach Enrico Blasi's tenure began in 1999. MU does receive some credit for participation in the Three Rivers Classic this season, although they managed to duck PSU, but... there's that NCHC thing rearing its ugly head again. Without it, Miami is first or second in the region. With it, they're third.

4. St. Cloud State. In the recent past, and in consideration of the fact that former Icers coach Morris Kurtz was a 27-year athletic director at SCSU, the Huskies would almost certainly be somewhere other than last. However, Kurtz retired last June, and... NCHC. Ew.


1. Minnesota. With the end of Michigan's 22-year tournament streak this year and the low seed given to Wisconsin (although many are pegging the Badgers as a dark horse, given the 10 wins in 12 tear that got them into this thing), stacked Minnesota has to be considered the favorite to represent the Big Ten deep into NCAAs, and Penn Staters should act accordingly. Since the announcement of the conference's formation, haters have had loads of ammo, thanks to frequently-underperforming programs, as judged by their traditional standards. In 2011, Michigan was the only Big Ten school to qualify for the tournament, although their run to overtime of the national championship game helped alleviate the issue. Last year, Michigan, Michigan State and Minnesota all made it, but only the Gophers managed to win an NCAA Tournament game, two actually, before falling to eventual national champion Boston College in the Frozen Four semifinals. Until the Badgers' late run this season, things once again looked pretty bad for the Big Ten, particularly with usual powers Michigan and Michigan State slumping - but a Gophers national championship leading into Big Ten play next year would help the league's credibility immeasurably.


2. Niagara. Niagara is a team from mid-major league Atlantic Hockey and received an at-large bid. Not supporting that is un-American, or something. As mentioned under the Canisius entry, AHA teams get extra credit this season due to PSU's 13 games against the conference - it would be nice if the Nittany Lions' competition, or at least the teams that beat that competition to win the AHA regular season (Niagara) and playoff (Canisius) titles, ends up looking good.

3. Yale. The Bulldogs, along with New Hampshire and arguably UMass-Lowell and Minnesota State, stand out as a more or less completely neutral team from a Penn State standpoint. Don't root for them against Minnesota of course, but should Yale stun the Gophs, feel free to pull for them against North Dakota. You could even support them against Niagara, given the lack of truly compelling reasons to support the Purps, if you're a huge fan of junior forward Jesse Root, a Pittsburgh native who is fifth on the team in scoring with 20 points this year.

4. North Dakota. ...and in what's become an annual tradition, the Sioux bring up the rear due to what I'm calling the Eric Burton rule. I'm not sure that I have to elaborate at this point, but if I'm wrong, get at me in the comments. Because it will never stop being funny, here's what happens when the Sioux get eliminated (for those unfamiliar with the context, Michigan's Scooter Vaughan just scored an empty-netter to clinch victory for the Wolverines in the 2011 Frozen Four semifinals): 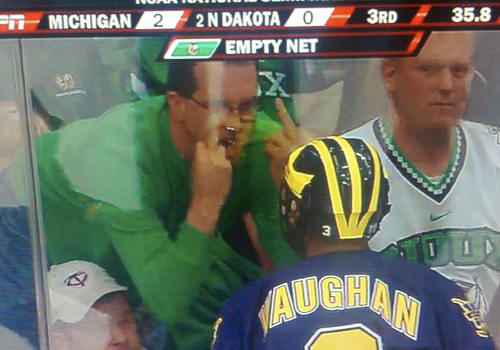