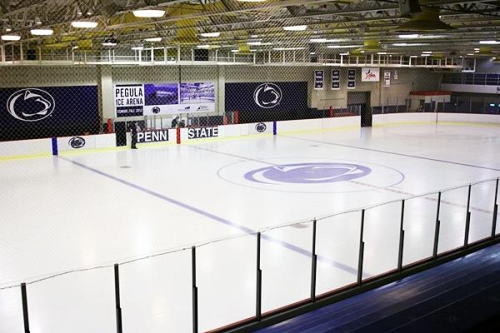 In order to bid a fond farewell to the Greenberg Ice Pavilion, the orange barn Penn State hockey called home from January 16, 1981 until February 16, 2013, here is the first half of a subjective opinion of the top 33 games in the building's history. The significance of the number 33, of course, is that the rink hosted 33 seasons of games. This post will cover numbers 17 through 33, with the top 16 to come in Part II.

Unfortunately, due mostly to lack of documentation concerning Lady Icers and Ice Lions games, this list only includes contests from the Icers-to-NCAA men lineage, with sincerest apologies to all involved in the many fantastic Ice Pavilion games not involving the Icers or Nittany Lion men.

33. Penn State 5, Air Force 1 - November 10, 2012. While it won't be remembered as a fantastic game in and of itself, it did end up as the best (with no disrespect intended to Alabama-Huntsville, the only other DI team to lose in the Ice Pavilion) NCAA-era win the barn saw. Matt Skoff stopped 31 of 32 Falcons shots in the game that arguably made him the lead goaltender for the rest of the season, and Max Gardiner assisted on goals by three different scorers.

32. Penn State 3, Rhode Island 2 (SO) - February 3, 2007. Ties were eliminated in favor of the shootout in ACHA Division 1 for the 2006-2007 season, and thanks to Nate Obringer's goal, along with Chris Matteo's blanking of the Rams in the skills competition, the Icers earned their first shootout win over the defending national champions. Perhaps even more significantly, the win completed a season sweep of URI, after the Rams spoiled Joe Battista's final game as head coach with a 3-1 win in the 2006 national championship game.

31. Penn State 8, Cortland State 7 - December 4, 1981. The Icers never led until the final three minutes of the contest, but still managed to upset NCAA Division III Cortland in a defense-optional affair that stands as the Icers' first win over an NCAA team. PSU faced two-goal deficits at 4-2, 5-3, 6-4 and 7-5, but Brad Rush and Clark Dexter scored the tying and winning goals 43 seconds apart late in the third period to turn the game on its head. The line of Toby Ritner, Joe Grainda and Matt Glass combined for five goals, while Battista had three assists to become the first PSU defenseman to crack the 100-point plateau.


30. Eastern Michigan 4, Penn State 3 - December 2, 2000. One day after Adam Patterson stunned the Icers in overtime, the Eagles proved the win was no fluke by doing it again the next day by an identical score. Penn State, which was without star players Alon Eizenman and Josh Mandel, battled back from a 3-1 deficit only to see EMU notch the first Ice Pavilion sweep by the visiting team since Erie College pulled it off on December 10th and 11th, 1993.

29. Penn State 5, Kent State 3 - February 1, 1986. In one of the Golden Flashes' final games before elevating their program to NCAA Division I status for the following season, the Icers got revenge for two early-season blowouts at Kent and an overtime loss the previous night with a highly-physical win. Rick Tullio and Lynn Sipe both scored in the first nine minutes of the game, and after KSU struck back with two in an 18-second span, Tim Holdcroft and Davis Mulholland restored the two goal advantage in the second period. Sipe added a second goal early in the third period to seal the result.

28. Rhode Island 5, Penn State 4 (SO) - February 5, 2011. In the first season following the announcement of the NCAA transition, the Icers very nearly missed the ACHA national tournament for what would have been the only time ever, thanks to a string of inconsistent results that lasted for most of the season. With numerous players and coaches from both sides missing this contest due to the 2011 World University Games, David Macalino scored the shootout winner for the Rams, the only goal in 10 total attempts, after the teams traded goals throughout a back-and-forth 65 minutes. However, the PSU side left the series confident that the three-point weekend (following a 4-3 Icers win the previous day) was enough to make nationals. "It feels like we got two wins,” Paul Daley said. "We played really well and made good adjustments. Coach [Josh] Hand [who took over bench duties with head coach Scott Balboni at the WUG] has had a super-positive mentality with us. The bench is upbeat. It’s had a great effect."

27. Penn State 7, Michigan-Dearborn 5 - November 12, 1994. In the early and middle 1990s, Michigan-Dearborn, a former NAIA power - until the NAIA stopped sponsoring a hockey championship after 1984 - that was coached by none other than current Michigan State NCAA coach Tom Anastos from 1987 through 1990, emerged as the Icers' biggest rival (notably, it was UM-D who halted the Icers' championship hopes in 1992, the first and only time PSU hosted the ACHA national tournament). Suffice it to say, it was not a friendly rivalry. In an ending that foreshadowed a somewhat similar event five years later, the game was called with 4:31 remaining after a shoving match between Icers goalie Jeff Crispino and the Wolves' Jesse Hubenschmidt. That exchange capped a 13-penalty period for Dearborn, including game misconducts to head coach Joe Aho and assistant coach Edward Forman.

26. Penn State 5, Eastern Michigan 5 (OT) - December 3, 1999. The Icers, despite holding a 3-1 lead in part thanks to Paul Sealock and Brandon Cook both scoring their first career goals, fell victim to an EMU rally that saw Dan Maszatics and Craig Morton each score twice, with Morton's breakaway backhander standing as the equalizer. The result, combined with an Eagles win the next day, and a sweep at the Ice Pavilion the next season (see number 30), gave rise to the idea of an Eastern Michigan/Penn State-ruled ACHA that never really materialized, at least from the EMU end.


25. Penn State 1, Lindenwood 0 - November 18, 2005. There was no way to know it at the time, of course, but a single series at the Ice Pavilion would turn out to be the only meeting of these two ACHA titans. Since the association's 1991-1992 founding, either Penn State or Lindenwood has appeared in 17 of the 22 championships games, winning a combined seven titles. The more established dynasty came out on top of the newcomers, as Paul Mammola (this game's goalie) and Matteo (in net for a 2-0 win the next night) put together a weekend shutout of the Lions. Obringer's goal with 5:47 left in the third period of the series opener represented all of the Icers' offense - but it was all that was needed thanks to a stout defensive effort, despite the absence of senior blueliner Matt Wallace due to injury.

24. Penn State 5, Fredonia 4 - November 5, 2011. In a game played against the backdrop of the emerging Jerry Sandusky scandal - Sandusky, Tim Curley and Gary Schultz were arrested and the infamous grand jury presentment was released earlier that day - the Icers rallied from a 4-2 second-period deficit against the NCAA Division III Blue Devils, with Steve Edgeworth's power play blast tying the game early in the third period and George Saad potting the winner at 5:46.

23. Penn State 5, St. Clair College 4 - February 14, 2003. In an era when the Icers largely toyed with ACHA opposition, games against Canadian Colleges Athletic Association schools like Windsor, Ontario-based St. Clair provided a sound challenge for the dynastic PSU team. On this occasion, Curtiss Patrick's backhander with a defender draped on him with 3:03 remaining provided the margin of victory, while Bill Downey registered his 100th career point on a goal earlier in the game. Significantly, this was the final home win for a senior class that won ACHA national championships at the end of each of its seasons in blue and white.

22. Penn State 6, Canton 5 (OT) - February 14, 1982. With a fresh, new ice rink on campus, the Icers initiated a four-team in-season tournament called the Nittany Lion Invitational, which would become a staple of the team's schedule over the next 25 years. The inaugural championship game, though, remains a classic. Penn State trailed 5-3 with less than 90 seconds remaining, but much like Lynn Sipe three years later (see number 17), Glenn DeStefano singlehandedly tied the game by scoring at 18:48 and again at 19:11. Rush then scored the OT winner on a slot wrister following a Norm Jacobs faceoff win. In victory, Icers coach Jon Shellington one-upped his college coach, Canton bench boss Terry Martin.

21. Niagara College 6, Penn State 5 (2OT) - February 28, 1986. In 1985, Penn State significantly upgraded its schedule by joining the International Collegiate Hockey League, a conference that, over PSU's seven seasons of membership, would play a key role in elevating the program to new heights. The Icers' first appearance in the ICHL playoffs would provide a glimpse of the challenge to come when Niagara raced out to a 5-1 lead after two periods. PSU would rally to force overtime, but it was for naught, as the Knights ousted the second-seeded Icers in a second 10-minute extra period. The loss spoiled the idea a highly-anticipated championship-game meeting between Penn State and St. Bonaventure, which won the ICHL's regular season title.

20. Penn State 4, Buffalo State 3 - February 19, 1994. Former ICHL rival Buff State elevated to NCAA Division III in 1993-1994, but the Icers still managed to get one last shot on the Bengals thanks to Don Lamison's hat trick, as well as his crucial blocked shot in the dying moments to preserve the win. "Here's what you have to understand about the kind of player Don Lamison is," Battista said. "Not only does he have three goals and an assist, but he blocks that shot with about a minute left, and then clears it out of the zone. That says a lot about him, and those are the kind of plays that win championships."


19. Penn State 5, Illinois 4 - January 17, 2009. Top-ranked Illinois, which enjoyed the only perfect season in ACHA history in 2007-2008, fell twice in a row to the number three Icers for the Illini's third and fourth losses in two years. In the back half of the series, PSU jumped out to an early 3-0 lead on two goals from Tim O'Brien and another from Steve Peck. Illinois would rally to tie the game at four, but Lukas DeLorenzo potted the third-period winner after intercepting just in front of the Illini net. "I was just forechecking their defenseman and I got my stick to the other side," DeLorenzo said. "I put my stick in the lane and luckily I walked in on a breakaway."

18. Delaware 3, Penn State 2 - February 5, 2000. Around the turn of the century, the home series with the Fighting Blue Hens was always notable for its coinciding with alumni weekend, thanks in no small part to the fact that former Icers Josh Brandwene and John O'Connor were on the UD coaching staff. On this occasion Brandwene, who of course got his white hat out of storage later to become the NCAA women's coach at PSU, spoiled the ceremonies of the day and led Delaware to its first win over PSU in 30 tries, dating back to the 1978-1979 season. Travis Bradach's goal off of Mark Scally's stick with 12 seconds remaining in the second period held up as the winner, while Lance Rosenberg made 56 saves for the Hens.


17. Penn State 6, Ohio 5 (OT) - January 19, 1985. By most accounts, the 1990 National Invitational Tournament meeting that saw PSU pull off a massive upset in Athens was the launching point of the Icers-Bobcats rivalry, but there's a pretty strong case to be made for this game, the third of four consecutive overtime games between the teams. Penn State trailed by two with just 23 seconds remaining, before Sipe got to work on a pretty unlikely natural hat trick (to go with another goal he had scored earlier). First, he poked home a power play rebound to pull the Icers within one. Then he deflected home a Jeff Speece clapper to tie things up. At 7:06 of the 10-minute overtime period, Sipe banked in a wrister off of OU goalie Lindsey Nonnemacher's mask. The win gave PSU the title in the fourth Nittany Lion Invitational.
Posted by Kyle Rossi at 8:28 PM