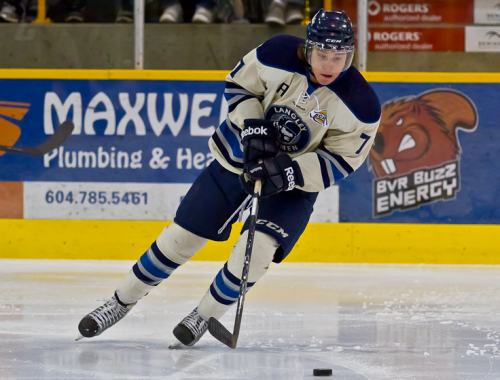 On Tuesday night, the BCHL's Langley Rivermen announced that center James Robinson has committed to Penn State for the 2014-2015 season.

That announcement from the Rivermen is packed full of good stuff, so let's grab some of that. First, Robinson on his pledge:


“I am very excited about my commitment to Penn State. They have a great hockey program to go along with a fabulous school and I am proud that I will be a part of it all. The new facility is state of the art and will be very fun to play in, but I really liked the coach Guy Gadowsky. He is obviously a very prestigious coach around the NCAA ranks and when he talked about his philosophy with regards to the program it seemed like a great fit for me."

Next up, Rivermen head coach and general manager Bobby Henderson:


“I am very proud of James committing to a program like Penn State. They are an emerging hockey powerhouse and for him to be able to be a part of that it’s a great thing for James and of course the Rivermen organization. In my two years coaching in the BCHL, Coach Gadowsky has been a guy that I have looked up to and just looking at his track record when he was in Alaska and Princeton it’s pretty remarkable what he has accomplished. It’s exciting for James that he not only gets to play Division I hockey, but to play under a two-time coach of the year will only help his development."

So guys, what do you think of Coach Gadowsky?

In all seriousness - and I've said this from the beginning - the arena will be incredible and is obviously essential to our being here in the first place, but it's the people, not the buildings, that do the recruiting. The good news is that we have great people to with the great building.

Robinson just completed a highly-successful rookie season in the BCHL (the Rivermen were eliminated from the playoffs on Tuesday night) with 42 regular-season points in 55 games, good for third-best on a team with seven other NCAA DI commits. The left-handed shot helped the Rivermen to a 24-26-1-5 (W-L-T-OTL) record and the team's first-ever postseason appearance, although as referenced, they were bounced out of the first round by Surrey. For the early stages of the season with Langley, he teamed up with fellow 2014 commit Bo Pellah, prior to Pellah's October 31st trade to Alberni Valley.

He has other connections to future teammates as well. In 2011-2012, he was on the affiliate list of the AJHL's Spruce Grove Saints and got into three games with the club, which then had soon-to-be-sophomore David Glen, and incoming freshmen Dylan Richard and Mike Williamson on its roster. Robinson had a goal and four assists in one of those three games (a 7-2 win over the St. Albert Steel on February 10, 2012), including an assist on a Glen goal and a goal from Richard's assist. 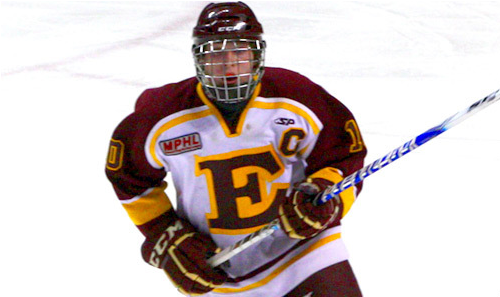 Primarily during that season, as well as in 2010-2011, Robinson played at Edge School, a prep school near Calgary, Alberta with an athletic emphasis that has produced notable players like Tyler Myers of the Buffalo Sabres and Joe Colborne, a 2008 NHL Entry Draft first-rounder who played at the University of Denver and is presently in the AHL. At Edge, Robinson was named captain in 2011-2012, while also leading the team in scoring in both of its leagues.


"I am a hard working, two-way forward who will pretty much do anything for the team to win, and I like to score some goals too."


"He is a good honest player and has all the tools that will eventually turn him into a great player. James is awesome in the face-off dot and overall is a leader that will do anything to win."

I feel like I could copy and paste that last part with most of the guys we've recruited. In case you're wondering why Gadowsky's had the success he's had in his career without 10 NHL draftees on each of his teams.

When Robinson arrives in 2014, he'll do so with only - at the moment, anyway - Pellah, and to a team that won't face a ton of departures. That initial batch of transfers from other NCAA programs (Nate Jensen, Justin Kirchhevel and Taylor Holstrom are the ones remaining), although listed as juniors on the official roster, will still be eligible in 2014-2015. Technically, original Icers Michael McDonagh and Matt Madrazo will be eligible as well, although the team has not chosen to exploit thecfull capacity of eligibilitycin the cases of other transitioned ACHA players. There is not a single player on the team that has to leave after next season, although as we know, someone likely will.
Posted by Kyle Rossi at 2:54 AM