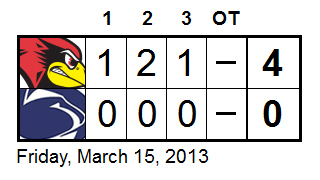 The Ice Lions, just as quickly as their ACHA Division 2 national tournament began, find themselves on the brink of elimination after a 4-0 game one loss to Illinois State Friday in Chesterfield, MO.

Redbirds senior goaltender Ryan Siuzdak earned the shutout for ISU by closing the door on a Penn State offense that frequently threatened, but also occasionally appeared out of sync and frustrated. He got plenty of goal support as well, thanks to a gritty effort that saw two dirty goals - as well as one fluky one, and a late tally meaningful only in terms of pool tiebreakers - decide the contest.

Midway through the first period, and 24 seconds after a Mac Winchester holding penalty, Jordan Leach banged home the game's opening goal from Brian Reimel and Eric Brown, after some good movement by the latter two got the puck to the front of the net.

Five minutes into the second period, the Redbirds caught a crucial break when an Anthony Luka dump-in took a skip off of the Zamboni door and ended up right in front of PSU goalie Kevin Lowthert, where Carter Kernbauer showed up to bury (PSU actually got a similar bounce in the first period off of Brandon Russo's dump, but the timing and positioning weren't as fortunate for the Ice Lions). With 7:26 remaining in the middle frame, Connor Anderson's third-chance goal served as the likely backbreaker, while Ryan Dunne added another from just outside of the blue in the last two minutes of the game on a pretty set-up by Brown, who terrorized PSU on the forecheck for most of the afternoon.

With the loss, PSU will now likely have to win each of their other two pool games to advance to Monday's semifinals. The next challenge will be Weber State, which stunned top seed Marist 7-6 in overtime in their opener, at 1:15 p.m. on Saturday.