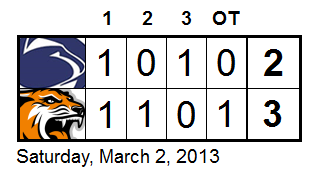 In a game defined, in part, by its early-period goals, RIT captain Kim Schlattman buried a rebound from a tight angle just 47 seconds into overtime to lift her Tigers (16-15-5, 7-8-5 CHA) into the CHA semifinals and send the Nittany Lions (7-26-2, 1-17-2 CHA) into the offseason following Penn State's first conference playoff series to close its first NCAA Division I season.

It was a heartbreaking conclusion to a campaign that may have been light on wins, but was certainly heavy on character. To be perfectly clear, I'm no less proud of the way the women's team closed out than I am of the men. Less than five days after Taylor Holstrom's OT winner at Wisconsin in the final 2012-2013 game for Guy Gadowsky's side, the women took a national championship squad (last year's DIII winners only had three seniors) into extra time though a comeback effort that saw PSU playing its best hockey in the third period. Nicole Paniccia was phenomenal with 54 often-spectacular saves. Taylor Gross, in addition to scoring the game's first goal off of a puck to the blue from right wing by Shannon Yoxheimer, played a incredibly gritty game, sacrificing whatever unbruised parts of her body remained in the name of the team and the playoffs. Hannah Hoenshell, who scored to tie the game at two 57 seconds into the third period, Jordin Pardoski, Micayla Catanzariti, Emily Laurenzi and Sarah Wilkie also stood out.

Here's all you need to know about my opinion of this group of players and coaches: TYT started out not really touching women's hockey (2010-2011), to then covering it with a fairly light treatment (2011-2012), cancelling my only scheduled trip to see the Lady Icers in year two due to a winter storm. This season, I attended 16 of the 35 games at four different locations - gotta hit Lindenwood and Syracuse next year to complete my CHA tour - and live blogged nine others from home, sometimes choosing women's games over the men when I felt that it was the more compelling matchup (of the remaining ten, five involved conflicts with trips for the men, three involved personal life conflicts and the other two... well, that's a long story).

I'll have more in the way of reflection over the next couple weeks, I promise. I'm begging off for now due to getting home from Rochester, via Buffalo, at about 12:30 a.m. (and anyway, half of the reason I started doing live blogs is so I wouldn't have to write extensive game recaps). Here's the RIT recap, followed by said live blog. 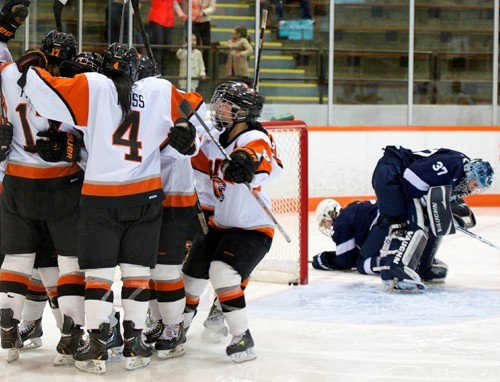 Senior captain Kim Schlattman (Stratford, Ontario/Cambridge Fury) scored 47 seconds into overtime to lift the RIT women’s hockey team (16-15-5) to a 3-2 victory over Penn State University (7-26-2) in game two of the best of three College Hockey America First Round Series from Ritter Arena on Saturday afternoon. RIT wins the series two games to zero and advances to the semifinals of the College Hockey America Tournament, where they will face No. 2 seed Syracuse on Friday.

Tenecia Hiller (Brampton, Ontario/Brampton Thunder) was able to keep the puck in the Penn State zone and fired a pass back to Kristina Moss (Webster, NY/Buffalo Bisons) at the left point. Her hard shot went just wide, but the rebound caromed to Schlattman at the right side of the goal and the senior captain backhanded a shot just past Penn State goaltender Nicole Panccia, who was diving across, but just too late. The goal was Schlattman's team-best 15th of the season

RIT dominated play throughout, out-shooting Penn State 57-19. Paniccia was outstanding for the Nittany Lions, stopping 54 shots, many in spectacular fashion to be named the game's first star.

Celeste Brown (Great Falls, MT/National Sports Academy) and Jess Paton (Woodstock, Ontario/Waterloo K-W Rangers) scored for the Tigers. In net, Ali Binnington (Oakville, Ontario/Mississauga Chiefs) made 17 saves to improve to 11-9-4 in 2012-13. The Tigers were awarded just one power-play, going 0-for-1.

Taylor Gross and Hannah Hoenshell scored for the Nittany Lions, who ended the season on a 14-game winless streak. Penn State was 0-for-5 with the man-advantage.

RIT Head Coach Scott McDonald is happy that his team is moving on to the conference semifinals.

"It was a gutsy, close playoff win," said McDonald. "Our top line really came through in the clutch for us. Offensively, we controlled the game, (Penn State's) goaltender played realy well to keep it close. We are looking forward to be have a chance to be playing for our league championship next weekend."

Maugeri tallied her ninth goal of the season at the 9:22 mark, as she streaked into the Penn State zone and took a perfect feed from Erin Zach (Elmira, Ontario/Cambridge Fury), diving to redirect a shot past Paniccia. Emilee Bulleid (Waterdown, Ontario/Stoney Creek Sabres) also assisted on the goal.

From there, RIT continued to press, but Paniccia kept everything out, stopping 35-of-36 shots in a losing cause. Binnington made 16 saves to record her sixth shutout of the season and improve to 10-9-4. Her best save came with 6:45 left in the final period, as Paige Jahnke fired a shot through a screen on a power-play that Binnington turned aside.

The Tigers came out and dominated the first period, out-shooting the Nittany Lions 16-4, but the game was tied 1-1.

RIT came out determined, firing the first six shots on goal over the first 2:29, but Paniccia was outstanding, making three big saves to keep the game scoreless. That prompted Penn State Head Coach Josh Brandwene to call a timeout just 2:29 in.

From there, RIT kept coming, but Paniccia kept the puck out. Her best save came on a redirection by Brown in front about five minutes in.

Penn State shocked the Ritter Arena faithful by jumping out to the lead at the 9:56 mark. Shannon Yoxheimer caused a turnover at the right wing boards and fired a shot towards the net that Gross redirected past Binnington off the crossbar and in for her seventh goal of the season.

Brown tied the game at the 14:45 mark, circling after Lindsay Grigg (Oakville, Ontario/Oakville Hornets) won the draw, going towards the net and firing a perfect shot over the shoulder of Paniccia and just under the crossbar from a tight angle for her first goal since Jan. 27 and ninth of the season. Grigg won an offensive zone faceoff to Ariane Yokoyama (Van Nuys, CA/LA Selects), who on a set play, tipped a pass to Brown, coming in from the left side. Brown circled around a few players and cut to the net, putting in a perfect shot for the goal.

RIT played an even better second period, firing 22 shots in the frame, while scoring the lone goal to take a 2-1 lead after 40 minutes of play.

Paton gave the Tigers a 2-1 lead just 1:30 into the period, taking a feed from Erin Zach (Elmira, Ontario/Cambridge Fury) in slot, getting her first chance stopped by Paniccia, but buried her own rebound for her fourth goal of the season.

RIT had numerous chances to go up more, but Paniccia was brilliant. She robbed Yokoyama twice, once on a breakaway, and then on a point-blank chance in front after Kourtney Kunchika made a perfect feed from behind the net.

Penn State tied the game 57 seconds into the third period, as Hoenshell took a feed from Birdie Shaw at the right face-off circle and put a shot past Binnington.

From there, a frantic end of regulation ensued, as RIT peppered the Penn State net with 18 more shots, but Paniccia was once again up to the task. She made two huge saves in the final seconds on shots from Kristina Moss (Webster, NY/Buffalo Bisons) and Danielle Read (Brantford, Ontario/Hamilton Hawks) through traffic. Melissa Bromley (Aurora, Ontario/Aurora Panthers) had a great chance early in the period, getting a rebound in the slot, but firing a shot just wide off her teammate Zach, who was standing at the side of the net.

RIT last played an overtime game in the postseason on March 16, 2012, when Grigg took a perfect feed from Yokoyama 2:30 into the extra session to score and defeat SUNY Plattsburgh 2-1 in the NCAA National Semifinal.