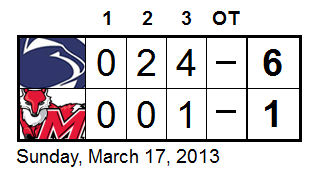 The Ice Lions (27-6-1 overall) closed their Pool C schedule at the ACHA Division 2 National Championships - and their season - with a 6-1 win over Marist Sunday morning in Chesterfield, MO.

In winning for the second straight day after a tournament-opening loss to Illinois State, Penn State demonstrated both heart and resiliency. Neither, however, were enough to catch the Redbirds, who tied Weber State in Sunday's other Pool C game to finish the round robin 2-0-1 (just ahead of PSU's 2-1-0) and as the group's representative in the national semifinals on Monday.

Without knowing how that simultaneously-scheduled game was proceeding, the Ice Lions did everything they could in an attempt to swing the tiebreakers in their favor (which would have come into play had ISU lost to Weber State) by crushing the top-seeded Red Foxes.

After a scoreless first period, an unlikely source initiated the rout: Mac Winchester. The blueliner, playing his final game in blue and white, potted PSU's first two goals. First, just 20 seconds into the second period, and following a textbook breakout after Marist had cleared the opening draw behind PSU goalie Ryan Demuth, Winchester fired one in down left wing. First assist on the goal, unofficially, went to Foxes defenseman Cameron Rosata, who deflected the shot past Tom Dorsey, his goaltender. Then, with 6:41 left, and just after keeping the play alive along the boards, Winchester ripped home the loose puck that he helped create from high in the left wing circle. Both goals came through a power play that ended the season on a high note, by connecting four times for the second day in a row.

The third period turned into a 20-minute-long statement, as the Ice Lions battered the Foxes for four more goals, including three in the first 4:06. Another early strike got things started, this time just twelve seconds in. That was followed shortly after by Taylor Vincent, who intercepted a careless pass across the middle while on the forecheck, then dangled Dorsey into oblivion before burying. Mike Broccolo converted PSU's third power play goal, and fifth overall, from near the blue following a puck to the front created by a faceoff win and good movement. Marist immediately answered through a Chris Cerbino one-timer from the slot on a Foxes power play, but Chris Lewis' capper restored the five-goal advantage in the late stages of the game.