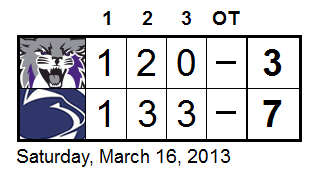 The Ice Lions (26-6-1) will live to fight another day at the ACHA National Championships in Chesterfield, MO, thanks to a come-from-behind 7-3 win over Weber State (28-11-3) Saturday afternoon. PSU is now 1-1-0 in the Pool C round robin, and another must-win - with help needed - will follow Sunday morning at 11:30 a.m. against Marist in the final game of the group round.

The easy story of the game was Penn State's power play, which finished 4-for-9 after a sluggish start. The Ice Lions misfired on their first two attempts (and frankly, didn't come very close), and immediately following the second, Braxton Green converted a breakaway to give the Wildcats a 1-0 first-period lead. Mike Broccolo answered late in the period with PSU's first conversion on the advantage, set up by a nice cross-crease feed from Chris Lewis.

WSU chased goalie Kevin Lowthert with a couple of quick goals early in the second period to put the Ice Lions down 3-1, but Ryan Demuth's entry provided a spark - the senior from Yardley, PA didn't allow a goal over the last 36 minutes of the game, with a dominant team in front of him playing like their season hung in the balance playing no small role in that. Max O'Malley's blast from right point on the power play cut the deficit to one just over eight minutes into the second, and even some penalty trouble shortly after couldn't derail PSU's comeback. Ryan Urban capitalized on a misplayed puck by Weber State goalie Craig Peterson while killing a 3-on-5 situation by firing into a gaping net. Broccolo's second power play goal of the game gave the Ice Lions their first lead into the intermission at 4-3.

WSU never really threatened for any sustained stretch after falling behind, and goals from Fredrik Linge, Neil Laessig and Mac Winchester (the last of the four PPGs, coming from the O'Malley spot on the other end of the ice in the last two minutes of the game) both sealed the result and potentially offered some tiebreaker help, should the Pool C semifinal bid come down to goal differential.