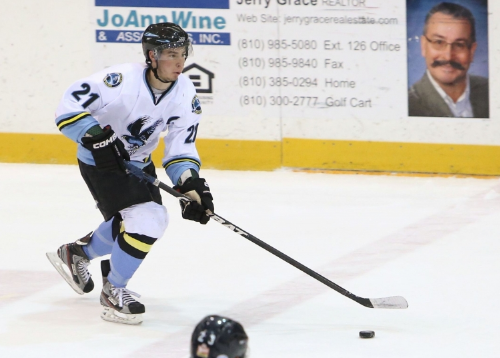 Port Huron Fighting Falcons (NAHL) forward Ricky DeRosa announced Tuesday night, via Twitter, that he has committed to play at Penn State for the 2013-2014 season.

Here's the obligatory press release quote from his current coach.


"We couldn't be happier for Rick," said Fighting Falcons Head Coach and General Manager Michael Gerson. "Penn State is getting a great player and a better leader as they get their program off the ground. With Rick's family living about three hours away it's a great fit for everyone involved."

It may come as a surprise to some - especially those who gloss over things without considering circumstances - but DeRosa will be just the third Guy Gadowsky-recruited Pennsylvanian on the team, joining Matt Skoff and Connor Varley (well, tied for third with Perkasie's Eamon McAdam and Glen Mills' Dave Thompson, also arriving for next season). The Aston native attended and played for Cardinal O'Hara High School, winning the Flyers Cup (the eastern PA high school championship) and the overall state championship in 2010. Simultaneously, he played for Philadelphia Jr. Flyers, and was one of the top forwards on a team that was the Atlantic District champions and runners-up at the 2010 USA Hockey Tier I 18U national championships.

His exploits earned him a selection in the 2010 USHL Entry Draft, 92nd overall by the Youngstown Phantoms, although he never stuck in Ohio, playing just one game in the 2010-2011 season. The left-handed shot has instead spent most of the last three seasons in the Tier II NAHL. Although other Nittany Lions (Justin Kirchhevel immediately comes to mind) have played significantly in the NAHL, DeRosa will be the first NCAA-era player to arrive at PSU directly from the league.

He played 25 games with the Amarillo Bulls in 2010-2011 before being traded to Port Huron in February, 2011, and he's been with the Michigan-based franchise ever since. The Falcons sputtered to a 6-46-6 finish in DeRosa's partial season (also the first year the team existed) but they turned it around with a 38-19-3 mark last season. This year, with a 25-24-4 record, the DeRosa-captained outfit is battling for a playoff spot into the home stretch of the regular season.

DeRosa reads as sort of a Tommy Olczyk type of player, who doesn't put up huge numbers, but will be of tremedous value both in the room and on the ice as a leader. Stop me if you've heard this before...


"He's a lead by example guy," [former] Falcons coach Bill Warren said. "He says all the right things at the right time in the room. He does a nice job with the younger guys. Does a nice job off the ice with the community service activities, going to schools.

"He's one of those guys that you want as a leader on your team."

And it's not like he's devoid of offense. He's the leading scorer in the (admittedly short) history of the Fighting Falcons, his 23 assists and 34 points are both team highs this season, and he's also capable of dropping what you'll see 1:16 into this video:

Despite all of that, as well as participating in the recent 2013 NAHL Top Prospects Tournament, scholarship offers were a bit slow in coming, although he received interest from Holy Cross, Princeton, Massachusetts, Maine, Michigan Tech, Lake Superior State, Northern Michigan, Bowling Green and Bemidji State at various points over the last two years.

The Nittany Lions now have what should be a pretty full roster for next season, assuming there aren't any moves the other way, which can't be ruled out at this point, of course. With DeRosa, this year's 15 forwards will become 16, 17 if counting ghost player Reed Linaker. This year's eight defenseman are scheduled to grow to nine (not a terrible idea considering how the season progressed with respect to the blueliners' injuries), while there are (in theory, anyway) four goalies.
Posted by Kyle Rossi at 8:09 PM