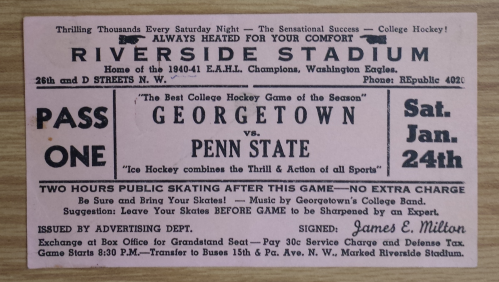 Today's starting point, quite obviously: a pass for Penn State's January 24, 1942 game against Georgetown, a part of Penn State University Libraries' Special Collections, just to get the credit in right at the top.

It's not really a "ticket," per se, based on the fine print. This document was to be exchanged, along with fees and taxes, for a ticket at the box office at Riverside Stadium in Washington, DC. It was issued by Riverside's advertising department, so it's probably fair to call it a promotional effort - hand out a bunch of passes to get people in the door, then hope they all buy peanuts.

To support that view, the pass also included an attached note. 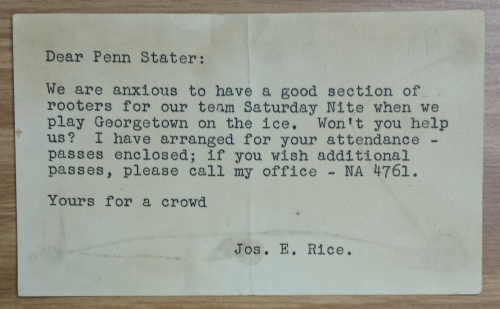 Unfortunately, a search for more on Joseph E. Rice was fruitless (he may have attended PSU circa 1919, but that's unconfirmed), but the generic greeting and stated goal gives off the impression that Rice flooded the Penn State community in DC with passes and hoped a few would show at the game.

The Daily Collegian offered unusually robust coverage of this one, as judged against the standards of the time, including a preview story on game day:

Handicapped by thawing weather conditions which have kept them idle for the past week, the Lion stickmen will seek to upset a favored Georgetown University squad tonight in Riverside Arena, Washington, DC.

Undefeated, untied Georgetown boasts a veteran lineup which has averaged the astounding record of eight goals per game in [four] victories this season. Last week, they humbled a strong University of Pennsylvania team, 4-1.

Tonight's lineup will again have Captain Larry Lightbody guarding the nets, and Bert Anthony and Tom Goodwin at the defenses. Mike Fedock and Earl Johnson will fill the wing spots, and Johnny Dufford will be at the center position.

As both the Collegian and the pass note, the game was contested at a facility called Riverside Stadium, situated along the Potomac in the northwest quadrant of Washington. Constructed in 1938 and 1939 as the United States recovered from the Great Depression, Riverside was a massive complex that hosted all manner of sport in its time. The main arena seated approximately 6,500 for basketball (roughly 1,500 fewer for hockey) was briefly home to the cagers from both Georgetown and George Washington Universities in the early 1940s, as well as a professional hoops team in the American Basketball League called the Washington Heurich Brewers, after a neighboring brewery. An adjacent football field hosted the DC public schools' football championship, and boxing and roller skating were also big draws at Riverside. And of course, there were frozen-water events like the Ice Follies, the Washington Eagles of the old Eastern Hockey League, and Georgetown's team, which began play in the 1938-1939 season before gaining university support the following year.

Riverside Stadium's heyday was remarkably short-lived - only about four years or so - thanks largely to competition from the cross-town Uline Arena, which opened in 1941. Uline, among other things, hired away Riverside's arena manager, then brought in an American Hockey League team (the Washington Lions) that helped force the Eagles out of business in 1942. Uline, which became the site of the first U.S. concert by The Beatles in 1964, stole college hockey as well, as both of the Nittany Lions' contests in the national capital following 1942 took place there. By late 1951, when the federal government sued to take over Riverside to house the then-new CIA, it was used exclusively as a roller rink. The CIA departed for Langley, VA in 1961, and both Riverside and the Heurich Brewery were razed to make way for the John F. Kennedy Center for the Performing Arts, the Watergate complex and the jumble of freeway ramps that surrounds the area.

Before discussing the specifics of the match, I need to let you know that the three accounts I have - the Collegian, the Washington Post and the Washington Star - differ from each other in many respects. Lineups, times of the goals, identities of those with assists and penalties, and even the sequence of the goals (according to the Post, PSU tied the game at one before GU went ahead 2-1, while the other two say the Hoyas were up 2-0 at one point) are inconsistently reported. All three agree on the goal scorers, but that's about it. Rather than give you three different versions of the same events, I've tried to identify the most likely truth on a case-by-case basis, usually helped by consistency between two of the three write-ups, but admittedly sometimes based on gut instinct.


Anyway, the game itself, at least from the Penn State perspective, mirrored Riverside Stadium's life in that a promising start against the powerful Hoyas fell apart quickly and definitively in the late going. While Georgetown jumped out to a 2-0 first-period lead thanks to goals from Bill Deegan and John Cassidy, PSU battled back through Ted Cauffman and Earl Johnson to level the game headed into the third period.

Then Deegan took over.

The senior, who (according to the Post) was set to join the Marine Corps after graduation - remember, Pearl Harbor was less than two months before this game - ripped off a natural hat trick in the third period, giving him four goals in all and putting the game out of the Lions' reach. In the days before the late-1950s Montreal Canadiens inspired the now-taken-for-granted rule that ends minor penalties after a power play goal, Georgetown scored four times with the man advantage according to the Collegian, despite the fact that PSU only took three penalties all game long (given the times of the goals, it seems likely that the first four Hoya scores, possibly occurring during just two different PSU penalties, were the ones referenced). John Dufford pulled a late goal back from Johnson's assist, but it only served as window dressing.

Here's an attempt at a box score - once again, sort of a composite of three varying accounts.


"The Best College Hockey Game of the Season," as hyped by the pass? Maybe not, but regardless, the defeated Penn State squad garnered respect. According to the January 28, 1942 Collegian, "the Lions were adjudged 'the strongest visiting collegiate team' to play in Washington's Riverside Stadium thus far this season."


Mr. Rice, by the way, was extremely successful in his attempt at getting a good crowd to the game. Attendance figures given ranged from "more than 4,000" (Star) to 4,600 (Collegian), with the latter account stating that 1,000 Penn State alumni were there. Six weeks after the game, the Post (which revised its initial count of 4,200 to 4,600 by that point) called the throng the largest ever recorded for a hockey game at Riverside Stadium and, in previewing PSU's return to DC to face the Navy All-Stars on March 10th of that season, said that Penn State "has established itself as far and away the best collegiate box office attraction to ever appear on local ice." Toss in the fact that Georgetown's band was at the game, and it's probably not a stretch to call the affair one of the great atmospheres in Penn State hockey history, even today.

Georgetown improved to 5-0-0 with the win, while the loss dropped the Nittany Lions to 1-2-0, although Art Davis' charges would go on to win four of their final five games to finish 5-3-0. Perhaps the commencement of U.S. involvement in World War II made it predictable, perhaps not, but following the season, the 1940-47 varsity era included just nine more official games, with only two of those ending in wins.
Posted by Kyle Rossi at 1:33 PM