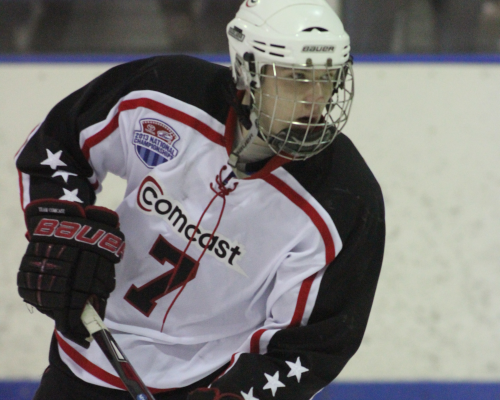 Kevin Kerr, a defense commit scheduled for 2014 or 2015 entry, has been picked for the prestigious USA Hockey Select 17 Player Development Camp. The camp begins on Thursday, June 27th, and runs through July 3rd in Williamsville, NY.

Kerr earned his way in by successfully navigating a tryout festival in his home Atlantic District last month, an event that helps fill a predetermined allotment of players districts are allowed to advance to the national camp (the Atlantic District number for defensemen was five). Previously, Kerr attended both Select 15s and Select 16s while a member of those respective age groups.

Select 17s, as you might have guessed, are a heavily-scouted event, so playing well would give Kerr a shot in the arm for next year's NHL Entry Draft. It would also give him a strong argument for consideration by future USA Hockey teams, including the National Team Development Program, which may have a few slots open on their Under-18 team. Space is pretty limited there though, as the vast majority of the U18 squad is filled by players moving up from the Under-17 team (Kerr got a tryout for that team last year but didn't make it).

It's been a pretty good several days for the Bensalem, PA native. Last Wednesday through Friday, the seventh overall selection in the 2012 USHL Futures Draft was at the Tri-City Storm's tryout camp in Las Vegas. The Storm hasn't made an official roster announcement yet, but Kerr let it slip on Twitter that he will be one of the 25 players invited back in the fall after playing five games for the team last season over a couple of call-ups. Primarily, he was with the Team Comcast 18Us and Holy Ghost Prep in 2012-2013, with the former winning the Atlantic District title and advancing to the quarterfinals of the USA Hockey national championships.
Posted by Kyle Rossi at 3:18 PM