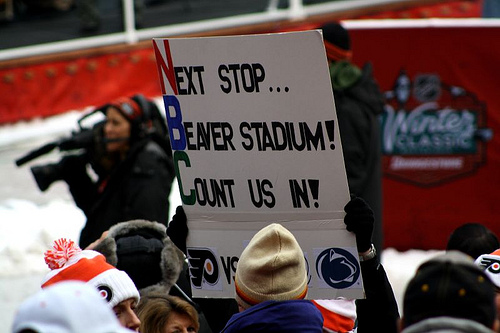 The buildup to the selection of Team USA for the 2014 World Junior Championships is officially underway, as USA Hockey has picked 40 skaters for its August evaluation camp. From there, roughly 25 will be invited to training camp in December, with a few more being trimmed ahead of the event, which begins December 26, 2013 in Malmo, Sweden. Not surprisingly, given the talent flowing through the program and that Don Lucia will be the head coach of the team, five Minnesota Golden Gophers (Brady Skjei, Mike Brodzinski, Tommy Vannelli, Hudson Fasching and Taylor Cammarata) received invites.

When I see Brodzinski's name, I automatically think of Eamon McAdam, so what of the goalies? Well, they're still TBD. A bunch of them - McAdam included - are in Ann Arbor, MI right now (Sunday through Tuesday, to be precise) battling for invites to the evaluation camp. Those making the cut will be announced at the conclusion of the mini-camp.

Often, I'm condescending towards stories built for a general audience. Not this one. Guy Gadowsky video, Pegula Ice Arena photo gallery, exploration of an underutilized angle with strength coach Robert McLean extensively quoted. Outstanding work, Mr. Leone. I'll even give bonus points for not automatically jumping on Tommy Olczyk for the player quotes. Read and enjoy, we're almost there.

1. Idea of hockey game at Beaver Stadium being considered?
(WJAC)

The big story this week, of course, was WJAC's confirmation that Penn State officials have discussed Beaver Stadium hockey. I've hesitated to talk about it because...
But I suppose it's time to get this out of the way. To begin sorting through it, here's what Battista said.

The idea of the NHL's Winter Classic stacked on top of major college games is not unprecedented - the now-annual Frozen Fenway college event got its start in the aftermath of the Boston Bruins' 2010 Winter Classic victory over the Flyers, and numerous lower-profile college games (Penn State-Neumann on January 4, 2012, to name one) have also piggybacked on the NHL-installed ice. Now that the pros have decided to play something like 30 outdoor games per year, that would seem to open even more possibilities.

The WJAC report was complemented by the official men's hockey Twitter dipping its toe into the water and unintentionally showing that the idea may be a bit undercooked. In response to the question "What do you think of an outdoor game at Beaver Stadium?" it got...

Ouch. Maybe we should park this one until people are excited enough about Nittany Lions hockey to think of it ahead of the NHL when the Nittany Lions' Twitter asks a hockey question. Or until PSU gets a mention in more than three of the roughly six zillion news articles and blog posts on the topic this past week (seriously, even Black Shoe Diaries is fixated on the Pens-Flyers side to the story while the Penn State blog ignores the idea of a Penn State team's potential involvement). The downside to having a huge stadium is that a crowd of 80,000 is a success for most places but a failure for University Park. We're going to need a massive amount of excitement for the college game too, and right now, nobody seems to care about Penn State playing outside.

And maybe it's a pipe dream, but as a matter of principle, I'd love for the Nittany Lions to not have to be an undercard to an NHL game. Big Ten rivals Michigan, Michigan State and Wisconsin have all managed to hold highly-successful outdoor hockey games in their school football stadia without swimming in someone's wake, and my hope is that PSU is able to do the same. In fact, my preference is that the PSU and NHL games take place in different seasons (yeah, good luck with that one, I know).

Enterprising journalists have confirmed that yes, people have talked about Beaver Stadium hockey, at least the NHL version of it, both in the eastern...


The Flyers have had preliminary discussions about playing a regular-season game at Penn State's Beaver Stadium against their archrivals, the Pittsburgh Penguins, club president Peter Luukko confirmed Wednesday.

"We have spoken to the Pens and the league about expressing our combined interest," Luukko said. "Not sure if next year is a possibility. Penn State is very interested."


"It would be great for Pennsylvania hockey," Penguins CEO David Morehouse said Friday.

The talks have been between Morehouse and Flyers president Peter Luukko, who confirmed them to the Philadelphia Inquirer. Luukko told the Inquirer that Penn State is "very interested" in being the site of such a game.

...halves of the commonwealth, and that PSU has been involved with those discussions on some level. Cool. Now don't blow it by letting the Sabres break up a potentially epic installment of the NHL's best rivalry (Terry Pegula, contrary to popular belief, bought an arena and some scholarships, not our souls) or by letting Luukko somehow cram his kid's team (Vermont) down our throats one more time on the NCAA side of things.

I'm hardly an outdoor game hater, and have made my position clear on one of the other occasions this came up. I just think we need to pump the brakes a bit. Everything is still very obviously in the earliest of stages, and the soonest this will realistically happen is 2014-2015. Beyond the things mentioned at that link, you're crazy if you think PSU will sacrifice an inaugural-season Pegula Ice Arena game, especially with no marginal benefit to doing outdoor hockey this year versus next year. Even a date 18 months from now assumes a positive resolution of things like the idea of 100,000 people parked in an icy mud pit (grass parking areas mixed with wintry precipitation) and the timing of Beaver Stadium's winterization.

We'll give Dan Vecellio and BSD the last word.


Battista told me that no formal talks with any teams had taken place from Penn State's end and that no commitments to any groups (teams, owners, etc.) had been made. The school was still in the exploratory phase and still researching whether a game at the stadium is even feasible considering parking and "winterizing" the stadium like they do every year as had been reported before. So, don't put too much stock into these stories just yet.

Kate Christoffersen, the Lady Icers original who played her senior year as an NCAA Nittany Lion in 2012-2013, ran a marathon on Sunday. Hey, if you have what it takes inside to come back from a career-ending concussion, why not?

She actually did quite well too. From start line to finish line, she only required 3:48:02, or 3:48:20 when measuring from the starting gun (the latter is the actual time used to rank the runners, which seems silly in this day and age). That was good for 85th place of the 327 runners overall, or sixth among females between 20 and 29 years old.

Save the Date: Summer Social
(psuboston.org)

If you're in Boston on June 29th and want to hang out with Battista and/or hear him speak (he's quite good at both of those things, trust me), here's your chance. Advance tickets are $40 for members of the Greater Boston Chapter of the alumni association, $45 for non-members, and $50 at the door.

Sometimes I forget that Purdue is in the Big Ten. Way to matter at things that aren't engineering, Purdue. Anyway, they're still broke and not adding sports like hockey or lacrosse, if you needed that.

The headline says it all... Sidney Crosby's sister Taylor is a pretty well-regarded goalie, one good enough to get invites to Hockey Canada U18 camps. She's entering her senior year at Shattuck-St. Mary's, where she posted a 2.04 goals against average and a 0.924 save percentage last season.

Hey Taylor, if you're looking at colleges, I can name one fairly close to your brother's team... geez, wouldn't that be something?

Laura Bowman is a Minnesota Ms. Hockey semifinalist by winter and a Minnesota state golf tournament qualifier by spring. She's okay at sports.

The Minnetonka High School senior emerged as one of five individual qualifiers from Section 6AAA and will compete for the AAA (the largest division) state title on Tuesday and Wednesday at Bunker Hills Golf Club in Coon Rapids, MN. For the "small world" file: on day one, she'll be playing with Lakeville North's Brianna Vetter, the younger sister of 2014 commit Christi Vetter.

After Pegula's Buffalo hotel/restaurant/ice rink project hyped a "major announcement" that many (guilty) assumed was the long-awaited "Canisius will play its home games here" unveiling, they instead introduced John Koelmel as the facility's president. Koelmel is a former CEO of First Niagara Financial Group, the entity which happens to have its name on the arena in which Pegula's Buffalo Sabres play. Moving on...

Cheyne Rocha, a senior defenseman at Army last season, was one of just two men's hockey players nationally to be named first-team Academic All-America. As mentioned here numerous times before, he is also the son of former Icers assistant coach Larry Rocha and Penn State lacrosse legend Candace Finn Rocha. They did an okay job raising him.


Rocha, who commissioned as a second lieutenant two weeks ago and posted a 4.20 grade-point average, is the first Army hockey player to earn the national academic honor as selected by the College Sports Information Directors of America. He registered the highest grade point average of the 15 first-team choices.

Rocha, who won the Senior CLASS Award for ice hockey, was a Rhodes Scholar finalist and is a three-time Atlantic hockey Association Academic All-Star. The 2013-14 team has not yet been announced.

A native of Rye, N.H., Rocha missed just two games this season when he interviewed for the prestigious Rhodes Scholarship. In addition to play as a defenseman, he was instrumental in starting the House of Blues, an awareness campaign for prostate cancer. He is also active with the Special Olympics and Neighborhood Knights, a group of hockey players who perform community service in and around West Point.

An engineering management major, Rocha will enter the Engineers branch of the U.S. Army and begin his service in Fort Carson, Colo.

Sure enough, despite the ouster of athletic director Steve Cobb, Alaska-Anchorage's gongshow of a head coaching search is marching forward. Even more surprisingly, they found five people who want easily the worst job in Division I right now.

John Carroll, a university in suburban Cleveland for those who don't know, has won the bid to host the ACHA Men's Division 1 National Championships in 2015. It will be the fifth time that the tournament has been held in the state of Ohio since 2003, and the fourth go for the Buckeye State in a nine-year stretch back to 2007.

The Blue Streaks previously hosted D1's best in 2009, a tournament which saw the Icers bounced in the semifinals by Illinois (the Illini went on to lose the championship game to Lindenwood) but not before PSU earned nationals bragging rights over Ohio for all eternity. That year's tournament was probably best remembered, however, for the Zamboni exhaust incident that forced the evacuation of the rink, sent 100 people to the hospital (as a precaution, nobody to the best of my knowledge was seriously affected) and forced a couple games to be suspended and completed the next day, including one involving Penn State Berks. Hopefully they got that checked out at some point in the last few years.
Posted by Kyle Rossi at 3:29 AM