The Penn State NCAA men's program has announced its full schedule for 2013-2014, the season notable for PSU's entry into both the Big Ten and Pegula Ice Arena.


The Big Ten Tournament will take place March 20th through 22nd at the Xcel Energy Center in St. Paul, MN. On the opening day of the playoffs, the bottom four teams in the final league standings will pair off as third vs. sixth and fourth vs. fifth for a single-elimination first round. The two winners will then meet the top two seeds for the semifinals on the second day of the tournament, followed by the championship game Saturday night.

Start times for the Big Ten games, as well as the television schedule, will be released at a later date.


"We've put together a challenging non-conference schedule with several marquee games. Together with a competitive Big Ten slate and trips to both Pittsburgh and Philadelphia, our fans will have the opportunity to watch some outstanding hockey whether at Pegula Ice Arena or on the road. It will be an exciting season as we enter our first year in the Big Ten Conference in a brand-new facility."

Mostly due to the late release date of PSU's schedule relative to others and the previous unveiling of the entire Big Ten schedule, no fewer than 29 of the 34 games had already been 100 percent locked in prior to this announcement. In order to avoid repeating myself while still conveying pertinent information, here are a bunch of old posts covering those contests from the time they were discovered.

So really, the news here is mostly about five games. And one of those stands out above the rest.

With no disrespect meant to other historical giants, there's an ebb and flow to greatness, a rise and fall (in a purely relative sense) in stature among the elite. And right now, at this moment in history, the "best program in the nation" argument begins and ends with the Boston College Eagles. BC, of course, is led by Jerry York, who became the all-time winningest coach in NCAA hockey history last season. York started out at Clarkson and won a national championship (in 1984) at Bowling Green, but his legend really exploded after returning to his alma mater in 1994. Witness... 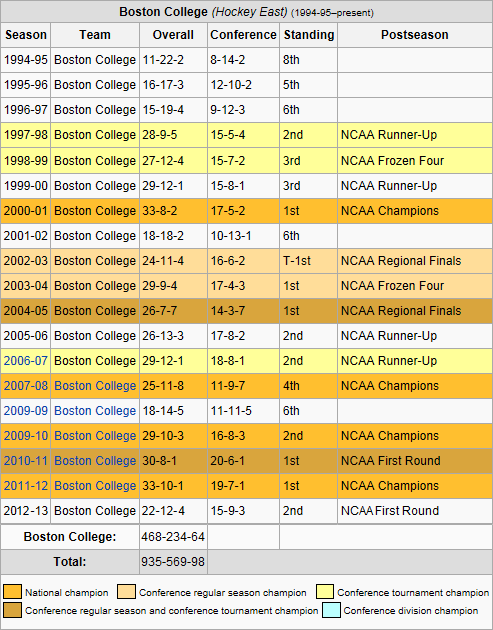 Reminder: I'm talking about this program because they're visiting Pegula Ice Arena on January 25, 2014, roughly seven months from now. Pardon my French, but holy crap. Guess we'll know where we stand, eh?

Last season was a bit of an off year for the Eagles since they didn't win a Hockey East championship of some kind (only the fifth time that's happened since 1997-1998) and didn't win an NCAA Tournament game after qualifying for the 14th time in the last 16 years. Rough go.

In terms of personnel, BC loses some key pieces from last season - workhorse goalie/Pittsburgh native Parker Milner, Pat Mullane and Steven Whitney up front - but as usual, there's plenty of talent to spare. Electrifying junior Johnny Gaudreau is among those expected to return. Gaudreau was Team USA's leading goal scorer (7) in its gold medal run at the 2013 World Junior Championships and was named a tournament all-star. The 5'6" Carney's Point, NJ native's collegiate exploits include status as a Hobey Baker Award hat trick finalist as well as first-team All-American selection last season (thanks largely to his being the national leader in points per game), and Hockey East and Beanpot MVP honors in 2011-2012. Basically, the 2011 Calgary Flames draft pick is quite good.


UMass-Lowell is a compelling measuring stick as well, and it has to be said that for all of Boston College's recent success, the River Hawks actually had a better team last year. Behind a stifling defense backed by freshman goaltender Connor Hellebuyck (1.37 goals against average, 0.952 save percentage), Lowell was 28-11-2 overall. Although UML won the Hockey East regular season title with a 16-9-2 record, they still were able to kick things up another gear in the postseason - first by taking the league tournament (and ending the career of legendary Boston University coach Jack Parker with a championship game shutout), then by knocking off Wisconsin and New Hampshire in the NCAA Tournament to reach the Frozen Four in Pittsburgh. Eventual national champ Yale needed overtime to take down the former Division II power by a 3-2 score. Other than 16-goal scorer Riley Wetmore, a senior last year, and defenseman Chad Ruhwedel, who signed with the Buffalo Sabres following the loss to Yale, UML returns every key player.

Air Force returns to the schedule for the away half of a scheduling agreement initiated last season. I suppose it's quite telling that the Falcons have become a bit of an afterthought after being the easy highlight of the 2012-2013 home slate, but here we are... although AFA head coach Frank Serratore is not amused. 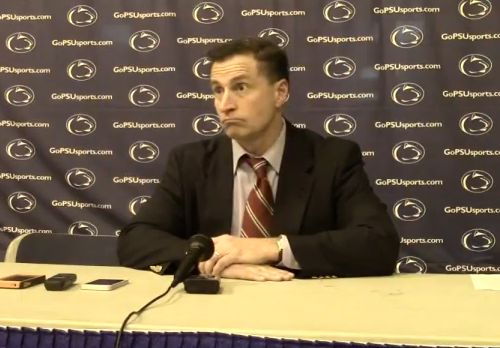 The Falcons, despite a winning 17-13-7 record, suffered a bit of a down year for a program that had qualified for five of the previous six NCAA Tournaments. Outstanding goalie Jason Torf will return from the team that split a series at the Ice Pavilion last November, so their more immediate concern will be ducking hits to the nation's sixth-best offense from the losses of Kyle De Laurell, Stephen Carew and John Kruse.
Posted by Kyle Rossi at 12:56 PM