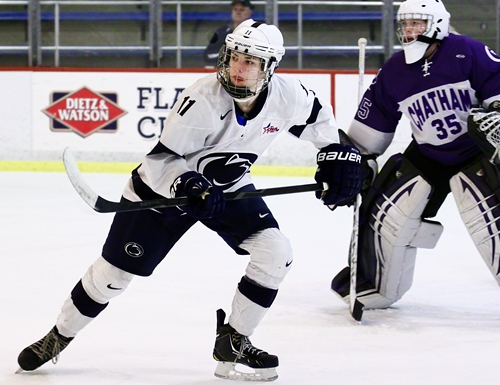 Former Nittany Lions women's forward Katie Zinn has landed on her feet after leaving Penn State, as she has transferred to the University of British Columbia, located just outside of Vancouver, for the coming year.

Zinn, of course, departed following a tough freshman season, one that saw her appear in just 12 games, scoring once with three assists. She missed PSU's final 13 games following a 2-1 loss at Union on January 12th on what was rumored to be a team suspension.

The Canadian will return to her native province; her hometown of Coquitlam, BC is roughly an hour east of campus. An added benefit to UBC is that the Thunderbirds' women's hockey program is on a rapid upward trajectory - after going 2-25-2 in 2011-2012, they were 27-13-5 last season. In the playoffs, UBC took their league, the Canada West Universities Athletic Association, for the first time with a thrilling best-of-three series win over the University of Calgary that included a 5-4 double-overtime game two win while the Thunderbirds were on the brink of elimination. UBC fell short in the Canadian Interuniversity Sport national championships, giving Zinn and her new teammates a goal still on the table.

Here's the full release from the school.

Katie Zinn, a 5-foot-7 forward from Coquitlam, B.C., will be joining the Canada West champions as a transfer from Penn State University (NCAA Div. I).

"I'm excited to return home to Canada and play under coach Thomas," said Zinn. "I am very fortunate to be given this opportunity and am looking forward to being a part of the Thunderbird legacy."

"We are looking forward to Katie adding some skill and experience to our group," said Thomas. "If she comes to camp prepared and earns an opportunity, she has shown to be a point producer on her previous teams."

As a rookie last season, Zinn scored one goal and three assists in 12 games for Penn State. She also won half of her faceoffs during the year.

Prior to Penn State, Zinn spent one year at Gilmour Academy, a prep school in Gates Mills, Ohio, leading the Lancers in scoring with 23 points in 27 games.

Before going stateside, she played three years for the Pacific Steelers of the Junior Women's Hockey League. As one of the team captains in her senior year, Zinn had a team-high 23 points in 25 games.

"Our Canada West division is considered one of the best/most competitive leagues in the CIS," remarked Thomas. "We are looking forward to working with her and developing her into a consistent offensive threat. Katie is a very good all-around athlete and her work ethic and commitment to conditioning will help to keep pushing the program."

Zinn will be enrolled in the renowned Faculty of Science at UBC.

"She will have a few months to get her feet wet as she will red-shirt with our team and potentially could play in January 2014," said Thomas.
Posted by Kyle Rossi at 9:50 PM