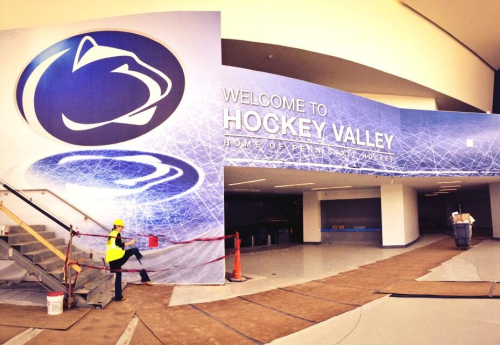 Plans are moving forward for a new arena in Detroit that would replace Joe Louis Arena as the home of the NHL's Red Wings. Olympia Development (a company owned by Wings owners Mike and Marian Ilitch), the city's Downtown Development Authority and Wayne County announced a memorandum of understanding last Thursday, essentially a non-binding document indicating that all parties are interested in heading down the road together. Previous reports indicated that construction could begin by the end of the year (I assume everything would have to click perfectly for that to happen), with the project taking roughly two years to complete.

So what's this have to do with Penn State? Easy. The Big Ten has committed to holding its tournament in Detroit in 2015 and 2017, and at the moment, it seems conceivable that by the time 2017 rolls around, Joe Louis Arena - redundant if a new building goes up - will be rubble. A sparkling new facility could also influence the awarding of the Big Ten championships beyond 2017.

By the time, the next Three Stars hits, Eamon McAdam's rights will (probably/hopefully) be the property of an NHL team, through this coming Sunday's NHL Entry Draft. So as you might expect, he got a fair deal of exposure this week, including the nice profile by THN's Ryan Kennedy leading this entry. McAdam also penned his final blog post for The Pipeline Show while also appearing on the show on Saturday.

In addition to all of the usual hockey firsts for PSU's program, McAdam has also crushed out a couple unique to this day and age: 1. First NCAA-era Penn State player with a Wikipedia entry, and 2. First Penn State player, to the best of my knowledge, with a parody Twitter account (language advisory on that one). 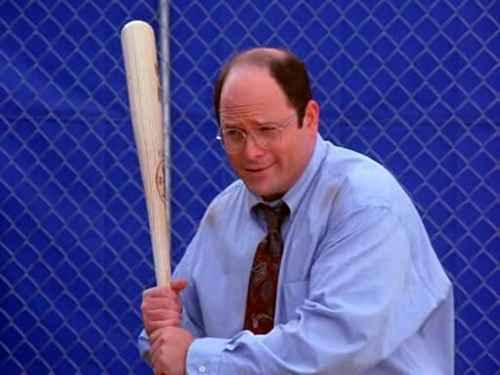 The Seinfeld episode where George Costanza shared his preferred baby name (after New York Yankees legend Mickey Mantle's jersey number) originally aired on February 1, 1996. Therefore, "Seven" is more or less in play for anyone 17 years old or younger. So there you go.

While McAdam is the only Penn Stater more likely than not to be scooped up by the NHL on Sunday, guys like Mark Yanis, Mike Williamson and 2014 commit Bo Pellah have a chance at getting a late-round look. Here, Williamson gets a mention (literally just that) in an article listing Canadian Junior A products with draftability.

CHA rival RIT unveiled a large and mostly Canadian freshman class, then made a routine announcement super awks by retweeting this on their official team account: 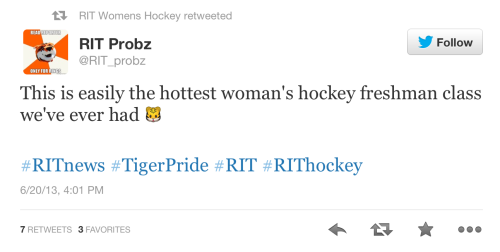 As much as I complain about Penn State's ultra-buttoned up approach to things, it could be worse I guess.

Local hockey player’s University future up in the air
(globalnews.ca)

Reed Linaker has continued to make the media rounds to share his unfortunate story. This latest news report (including video) comes from Dean Millard, who doubles as a co-host of The Pipeline Show.

Over a couple days last week, college hockey circles exploded with the news that two-time national championship coach George Gwozdecky (let go by Denver after this past season) interviewed for the vacant job at Alabama-Huntsville. Then they exploded again with the news that he withdrew from consideration.

Opinion nobody asked for: Gwozdecky has had a legendary career. However, I believe that much like athletes, coaching careers have a rise, peak and decline, and I also believe that Gwozdecky is more of a name than a great coach at this point. Still very good, of course, just not to the level of his reputation. Now, UAH could do worse than "a name" given what they've been through - and maybe the credibility coming from that name would have been a huge boost - but hopefully Gwoz passing on the job allows the Chargers to get a guy who ultimately becomes a name through his accomplishments in Alabama.

Former Ohio forward Tyler Pilmore, who just ended his outstanding career as a Bobcat in March, has signed with the ECHL's Toledo Walleye for 2013-2014. In 2012-2013 and following the conclusion of the ACHA season, Pilmore played eight games with the Walleye and the Wheeling Nailers.

While a Penn Stater will do even better than the ECHL soon enough, I have to admit that I'm a bit jealous, as (to the best of my memory, feel free to correct me if I'm wrong) the last surviving Icers playing in professional hockey were Curtiss Patrick (who kicked around the minor leagues from 2004-2009) and Justin Depretis (2006-2009).

I'm obviously a sucker for a good ACHA-to-the-show story, especially one with ties to Pennsylvania, and Grand Rapids winning the AHL title last week offered one in the form of Griffins assistant coach Spiros Anastas. Anastas, a Toronto native, played for Lebanon Valley College from 2006 through 2010, when the Dutchmen were an NCAA Division III program. He stepped directly from the ice to the bench in the middle of his senior season when LVC head coach Ted Russell abruptly resigned. Anastas stayed on as an assistant in 2010-2011, the program's successful (21-4-2) ACHA Division 1 debut following a 3-95-2 stretch over the last four DIII seasons (yikes). He then left to become a volunteer video coach at Western Michigan in 2011-2012 before moving on to the Griffins under head coach Jeff Blashill (who also hired him at WMU), where he's responsible for advance scouting and statistical analysis.

Anastas actually didn't go directly from Western Michigan to Grand Rapids, by the way. From August 23, 2012 until October 29, 2012, he was the general manager of the BCHL's Alberni Valley Bulldogs. On October 31, 2012, the Bulldogs acquired Bo Pellah from the Langley Rivermen. Either Anastas is a big fan of Pellah who started negotiations before taking the Griffins job, or he was standing in the way of the trade being finalized. Your call.

After one of the messiest coaching searches in college hockey history (fourth entry from the bottom), Alaska-Anchorage finally got their guy in Matt Thomas, who will join the Seawolves program after a long run as an ECHL coach. He also played for RIT back in the 1990s (when the Tigers were an NCAA Division III program) and served as an assistant at Maine from 2000-2002. I'm still not sure why anyone would want the UAA job, but regardless, best of luck to him.

In other Anchorage news, charges will not be pursued against the guy Thomas replaced, Dave Shyiak, over an alleged stick-swinging incident at a practice in 2011. So other than any blowups to come from discarded former athletic director Steve Cobb, it seems as if things might finally be getting back to semi-normal at Alaska's second-best hockey program.

Illinois: still not about to add NCAA hockey, if you needed that.

It won't be at Penn State, but the Big Ten could see at least one outdoor game this season:


The U of M is in talks with Intersport on hosting an outdoor hockey game vs. Ohio State at TCF Bank Stadium on @HockeyDayMN 2014.

Let me guess: both teams will receive $2 million for their participation (yes, I'm still upset about being burned by that).
Posted by Kyle Rossi at 2:43 AM