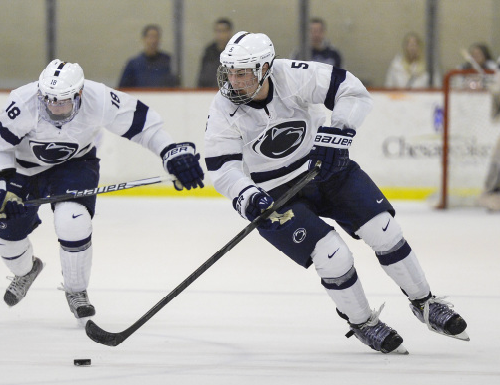 It's sometimes overlooked given all of the attention heaped on Eamon McAdam (guilty), but it is important to remember that there are other Penn Staters hoping to hear their name called during the NHL Entry Draft on Sunday. And D.J. Powers from Hockey's Future has good news regarding one of them:

That tweet was following up on a piece Powers wrote calling Yanis the fifth best NCAA player (meaning those who have played college games and have generally already been passed over once by the NHL, not those merely committed to/about to start at a college, as is the case with McAdam) available in the draft. Here's that excerpt:

Mark Yanis is a player that could potentially be a “hidden gem” in this year’s draft. While he doesn’t appear in Central Scouting’s final rankings and despite his limited number of games played, NHL teams have kept a close eye on the young rearguard all season long. The Grosse Pointe Woods, MI native has appeared in 15 games this season, posting nine points (four goals, five assists). His four goals were tied for the most among Penn State defensemen. Yanis got off to a strong start with the Nittany Lions before an ankle injury on Nov. 3rd sidelined him for 12 games. He returned to the lineup on Jan. 11th and simply picked up from where he left off. One of Yanis’ most memorable games came back on Oct. 27th versus Sacred Heart. In that game, he posted a goal and an assist to help guide the Nittany Lions to a 6-3 victory.

Yanis is a defenseman with size (6’3”/207 lbs.) that possesses excellent offensive ability and plays with grit and a competitive edge. What has scouts excited about Yanis is what he can do, particularly from a physicality standpoint, once he fills out his large frame. During his USHL days with Muskegon, Yanis established himself as a physical presence on the blueline and he has shown glimpses of that with Penn State this season.

Yanis possesses outstanding puck skills. He moves really well with the puck and makes great outlet passes. He uses his size and long reach advantageously at both ends of the ice. Yanis is a very good skater and is quite mobile, although he does need to develop a quicker step and improve his agility. There have been no noticeable residual effects of his injury since returning to the Nittany Lions lineup. Yanis can often be found jumping into plays. He sees the ice well and has the ability to quarterback power-plays, too. One of Yanis’ best assets is his shot. He possesses a heavy shot that is likely to become more powerful as he adds strength to his large frame.

Not much to add here, that pretty much nailed him. Yanis' offensive prowess was a pleasant surprise for Penn State last season after what he showed in Muskegon, and hopefully NHL teams now view him as well rounded enough to draft. His injury was obviously a tough blow given the already-limited number of games played by NCAA teams and the importance of Yanis improving his stock for his second run through the draft.

Powers' assessment joins one from Future Considerations' NHL draft guide, which called Yanis the 164th best player available, 59th among defensemen. FC added that "Yanis is a big, physical blueliner who uses his size to his advantage. He’s shown some flashes of offensive ability and moves well, but could improve his feet. By doing so, he can shore up some coverage lapses in his own end."

Future Considerations is one of five pre-draft rankings TYT surveyed earlier this month running deep enough to include all seven rounds. Two others in that category have included freshman defenseman Mike Williamson (NHL Central Scouting Services' 183rd-best North American skater) and 2014 defense commit Bo Pellah (the 198th best player available according to HockeyProspect.com). So while none of the three are likely to have a better-than-even-money shot individually with Yanis, Williamson and Pellah each only appearing in one of the five, on a collective level, it's important to not dismiss the idea of seeing two Penn Staters drafted.

That said, if any of the three go on Sunday, the safest bet is on Yanis. Why? Because draft guides don't do the picking, NHL teams do. And reportedly, six of them are at least thinking about the rock-solid defenseman.
Posted by Kyle Rossi at 2:03 PM