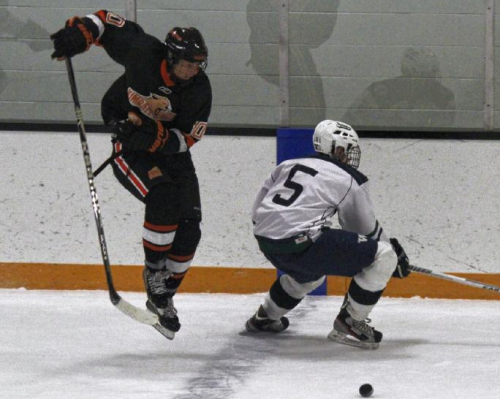 A.J. Greer, a commit projected to become a Nittany Lion in 2015 or 2016, was selected in the 11th round of the Quebec Major Junior Hockey League draft (193rd overall) by the Rouyn-Noranda Huskies on Saturday afternoon.

Because the Huskies' website doesn't have an English side and because my high school French was never that good, let's have some fun with Google Translate:


In the eleventh round, the pack was initially selected Anthony John Greer. This Quebec was not there. It currently operates in the United States.

"The pack," I'm guessing, is an informal nickname for the team, "initially" refers to the fact that Rouyn-Noranda had two picks in the 11th round, and "this Quebec was not there," means, I'm assuming, that Greer was not present at the draft (the original word used was "quebecois," or "person from Quebec," so that one's a minor translation error). In the context of the rest of the article, where several picks were on site and quoted directly or indirectly, the statement actually does make sense.

Anyway, it's the second time Greer has been taken in a draft over the last couple months, as the USHL's Des Moines Buccaneers made him the 66th pick in the fifth round of Phase 2 of that league's draft on May 7th.

Greer, a Repentigny, Quebec native, has seen his reputation grow quite a bit since electing to operate in the United States, at Kimball Union Academy in Meriden, NH this past season. The sophomore power forward helped the Wildcats to a spectacular 27-3-0 campaign by finishing sixth on the team in scoring with 16 goals and 19 assists. KUA, which featured ten NCAA Division I commits, stood as the top-ranked team in New England prep hockey for most of the season but was stunned by Gunnery in the quarterfinals of the Stuart/Corkery Tournament.

Just to address the first question I'm generally asked when something like this pops up: Is Greer in imminent danger of joining former PSU commits Thomas Welsh and Conor Garland in major junior? Probably not. When it comes to junior drafts, signability is a major consideration when making picks, and Greer's position as the 193rd of 253 is a good and generally accepted indication that QMJHL teams don't view him as particularly likely to eventually show up - especially when contrasted with his USHL slotting.

Also, allow me to run his tweet after hearing of Garland's defection to the QMJHL's Moncton Wildcats one more time. 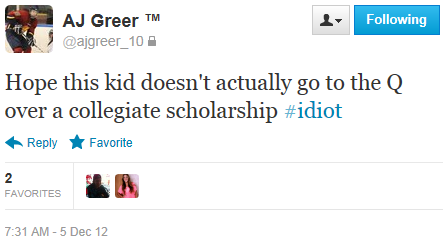 Reaction to the selection on the Rouyn-Noranda Facebook page, roughly translated, compared him to Louis Leblanc, a 2009 Montreal Canadiens first-round draft pick who played at Harvard in 2009-2010 before defecting to the QMJHL (with the then-Montreal Juniors, now known as the Blainville-Boisbriand Armada) the following season and finally going full-time pro in 2011-2012 with the Habs and the AHL's Hamilton Bulldogs. There might be a bit of wishful thinking involved there, although that's acknowledged in the concluding comment, which more or less says "it's a good pick if he changes his mind, if he doesn't, no harm done."

It is, however, important to remember that Greer is 16 years old and isn't even scheduled to hit Hockey Valley for 2-3 more years, so never say never. As Andy Johnson of Wisconsin SB Nation blog Bucky's 5th Quarter reminded me, this is the reality in the big-time college hockey. It's what we signed up for.

If you're one of those people who lies awake at night worrying about these things - and really, you shouldn't be, defections are an occasional fact of life and often unpredictable - there's some good news. Of Penn State's recruits beyond this year's freshman class, only Greer, 2014 D Bo Pellah (Spokane Chiefs - WHL) and 2014 F James Robinson (Moose Jaw Warriors - WHL) reside on the protected list of a major junior team (according to the best available knowledge, as the lists aren't readily published).
Posted by Kyle Rossi at 1:14 AM