Like my subtle move in bumping the outdoor game from first star last week to third this week? Me too. Guess it's not subtle if you go out of your way to draw attention to it.

Anyway, here's a well-thought-out argument for staging Beaver Stadium hockey in the 2015-2016 season, rather than in 2014-2015. The essential points:
In other outdoor game "news," the AP got athletic director Dave Joyner on record saying that this thing won't happen before the end of the 2014 football season. He also confirmed that he's spoken with Comcast-Spectacor (the entity that owns the Philadelphia Flyers) president Peter Luukko.


Joyner characterized the preliminary talk as exploratory and high level. “A wouldn’t-it-be-kind-of-cool thing to do” type-talk, Joyner described in a phone interview.

I try to give message boardy things a sniff check before posting them, and this one passed:


I was told that Lowell will be going to Princeton on a Tuesday, followed by 2 games at Penn State on a Thu/Fri, with Penn State hosting a football game on the Saturday. Looking at their football schedule, there's only one Saturday home game that Lowell doesn't have a hockey game scheduled yet - Sat 11/16 against Purdue. So, expect to see Princeton on Tue 11/12 and Penn State on Thu 11/14 and Fri 11/15.

Double-checking the check of Penn State's football schedule, the home games after the start of hockey season (known UMass-Lowell hockey games that weekend in parentheses) are October 12th vs. Michigan (vs. Sacred Heart/UMass Classic, October 11th and 12th), November 2nd vs. Illinois (vs. New Hampshire, November 1st and 2nd), November 16th vs. Purdue (none) and November 23rd vs. Nebraska (vs. Notre Dame, November 22nd and 23rd). So that much works. And that Princeton game has in fact been confirmed on Tuesday, November 12th.

If this guy's intel is good, it then becomes likely that the series at Air Force (the only unsettled full road series left) will slide into October 18th and 19th while the women are taking their turn opening Pegula Ice Arena. It seems kind of silly to guess at the Robert Morris (away) and Boston College (home) single games, since they can fit in a lot of different places, including mid-week. But for whatever it's worth, I'm hoping BC comes to town on Saturday, January 25th, which falls on a weekend clear for both teams and the arena.

And that's it. There are just six games not completely locked down right now. For the rest, as always: M Schedules/Results.

1. Ban Announced on All Bags at Sporting Events
(Onward State)

Long story short, if you try to bring any kind of bag - purses included, ladies - into Pegula Ice Arena, you're gonna have a bad time. Don't be that guy or girl.

Simple question: Which professional sports matchup would you rather see played in Beaver Stadium, Steelers vs. Eagles or Penguins vs. Flyers? According to BSD readers, it's a very, very, very tight call (in fact, a dead heat at the time this post went up). I'm not sure whether to be discouraged that the hockey game didn't take it in a walkover - I mean...wow, a American-style football game in Beaver Stadium, how novel - or to be pumped that hockey still contended in a poll on a site that lets Bill DiFilippo write about the sport.

From the "stories I didn't really expect to hit my inbox" file:


Mary Lou Nemanic, associate professor of communications at Penn State Altoona, has had documentary photographs accepted into the permanent collection of the United States Hockey Hall of Fame. Taken during the 1980s, the 16-inch by 20-inch, toned silver prints feature former U.S. hockey great John Mariucci. They are a part of a 20-print exhibit of hockey photographs that will be placed on regular display.

Mariucci, if the name rings a bell, has Minnesota's home arena named for him. He both played for (1937-1940) and coached (1952-1966) the Gophers, and still sits third on the program wins list behind Doug Woog and current coach Don Lucia. He's also credited for helping to grow Minnesota (the state) hockey at the grassroots level, as well as hockey in the U.S., partly though a silver medal as an assistant coach from the 1956 Olympics.

With a thoroughness impressing even yours truly, The Hockey Writers have assembled everything you could possibly want to know about Eamon McAdam ahead of the rapidly-approaching NHL Entry Draft. I'm not even offended over not being quoted this time around. Well, okay, I am a little bit. 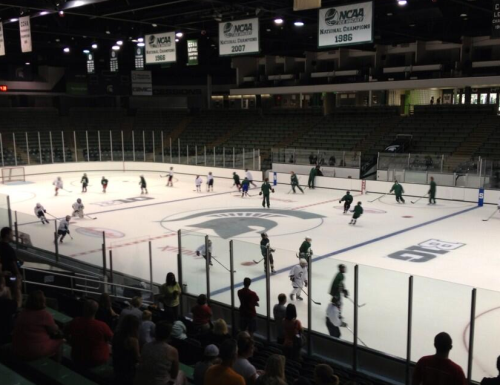 Sticking with my second-favorite Big Ten coach, he dropped some interesting knowledge - the league is talking about centralizing instant replay...


“It would be implementing our current NCAA video replay policy through a command center-type setup like the NHL does,” Anastos said. “Now, we haven’t done that yet. But that’s something we talked about at the (NCAA) rules committee and we talked about the Big Ten potentially exploring its benefit and reporting back to the (NCAA) committee.”

...and also (possibly, at some point) 4-on-4 overtime, which would join the already-implemented shootout in the category of non-traditional overtime rules used in the Big Ten and nowhere else in NCAA hockey.


The Big Ten will continue to hold overtime shootouts to decide winners this season. That’s something the CCHA had pioneered during Anastos’ tenure as commissioner, starting to use them in 2009-10.

“There’s talk about, in the future, putting on our radar more discussion on the potential of modifying our overtime procedure to include 4-on-4 overtime play as opposed to just 5-on-5. That’s technically available in the rule book today, but I don’t think anybody at the Division I men’s level has gone to it,” Anastos said. “We could choose to do that if we wanted to. But because of the impact that people feel in the RPI process, I don’t think we’re going to do something like that unless everybody does it across the board.”

Also, if you really need to know, media timeouts in the Big Ten will be at the first stoppage after the clock hits 15, 10 and 6 minutes remaining in the period and will last for 30, 60 and 30 seconds, respectively. 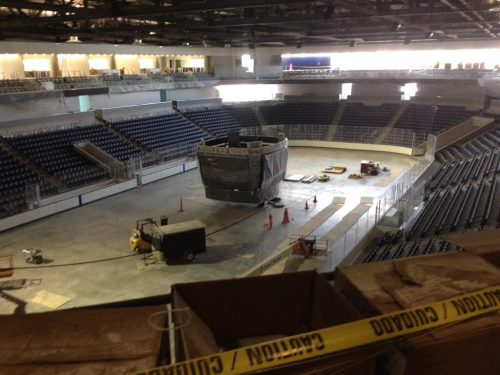 Penn State's home rink? Glad you asked. It's ridiculous how done this thing is. We're literally just about at the phase where we start plastering the thing with gas company ads.

In case you were worried that they'd forget about seat selection until after the season had started (I was mildly concerned):


With only a few weeks left to go in the Penn State Alumni Challenge for Former Student-Athletes, teams can still make a final push to win one or both $6,000 prizes. Women's Soccer continues to lead for the first prize for the highest percentage of former student-athletes who have supported Penn State Athletics with 40.85 percent participation. Trailing the Women's Soccer program are Football (35.76 percent), Men's Hockey (31.69 percent), Men's Lacrosse (28.65 percent), and Men's Volleyball (24.17 percent).

The NCAA made its annual release of Academic Progress Rate scores last week, and while the data hasn't caught up with Penn State having NCAA hockey yet (this latest batch includes everything through 2011-2012), PSU did well as an institution with a 984 four-year score across all teams.

In men's hockey, Ohio State put up a 997, tops in the Big Ten and tied for seventh nationally. That's... uhhh... paradigm shifting. The other Big Ten schools: Minnesota (987), Michigan (981), Michigan State (978) and Wisconsin (977). Dead last in all of DI? Alaska-Anchorage with a 931. Dear God, is there anything that hockey program isn't terrible at? A 924 gets you an unfriendly phone call from the NCAA, although according to Western College Hockey Blog, UAA had an extremely weak 2008-2009 score that will roll off of the books next year, so they're unlikely to be in grave danger of losing scholarships (not that it really matters because, again, they're terrible).

While hockey, generally, performed well across the board, the women did even better than the men, with Quinnipiac's 959 the only female score below 973. Boston University was one of six schools to post a perfect 1,000 - notable for our purposes because PSU assistant Gina Kearns' senior year with the Terriers is still included in the data. Robert Morris led the CHA with 991, with Mercyhurst and 982 and Syracuse at 979. And... that's it, because RIT and Lindenwood are also new to DI.

Penn State freshman Laura Bowman ended up in a tie for 26th place at the Minnesota big-school golf tournament after shooting an 87 on the first day then improving to an 80 on the second day. If nothing else, that result gives her bragging rights over Amy Petersen, who finished tied for 29th with a 173 two-day score last year.
Posted by Kyle Rossi at 3:15 AM