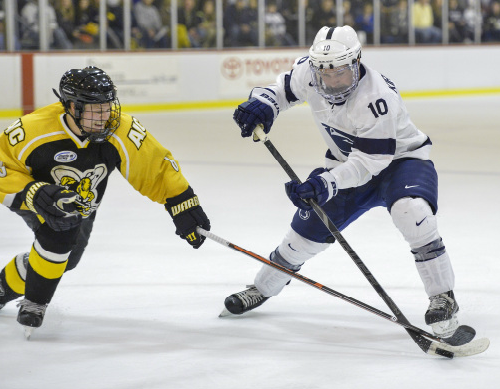 On Thursday afternoon, Penn State announced that Justin Kirchhevel, who would have been a fourth-year junior forward in 2013-2014, has left the program. Here's the full PSU release.

"I want to thank the coaching staff and my teammates for an amazing experience over the last two years. It truly was an honor to represent the Nittany Lions and help set a solid foundation for the program," said Kirchhevel. "I've learned invaluable life lessons at Penn State that I will take with me forever."

"Justin was a significant part of our program's foundation and a consummate Nittany Lion on the ice, in the locker room and in the classroom," added Gadowsky. "I want to thank him for all his contributions during his time at Penn State. Justin made this decision with his family's best interests in mind. He will be missed, and we wish him well."

Kirchhevel began in his collegiate career at the University of Alaska Anchorage in 2010-11 and registered three points (2g, 1a) in eight games. In 24 career games between the two schools, he recorded four goals and five assists.

While "personal reasons" tend to be a catch-all in these types of announcements, given the amicable separation and Kirchhevel's apparent quitting of college hockey altogether, it may be an accurate label in this situation. TYT extends its best wishes to Justin and his family.

Kirchhevel follows Bryce Johnson, who left the program over winter break last season and transferred to Oklahoma for "personal reasons" without getting a press release with glowing words from Guy Gadowsky, as the second rostered player to voluntarily leave the Nittany Lions program prior to Senior Day. Curiously, both Kirchhevel and Johnson were once celebrated, along with Taylor Holstrom and Nate Jensen, as the first players in Penn State's NCAA history back in 2011.

The status given those four was due primarily to their being NCAA Division I transfers who played their NCAA-mandated year in residence with the Icers in 2011-2012 before transitioning to the Nittany Lions last season. In the cornerstone ACHA program's final season, Kirchhevel was a scoring dynamo, leading the team in scoring with 19 goals and 37 assists in 29 games but also impressing with his penalty killing and willingness to do other thankless tasks. 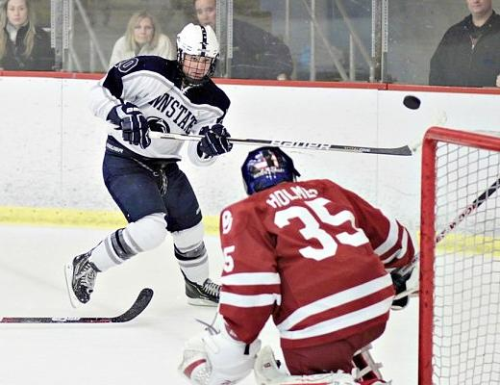 Arguably, his two most memorable performances at Penn State both involved Johnson's present squad. On February 4, 2012, and with the Icers facing a 3-0 hole at the 14:59 mark of the third period, Kirchhevel scored with 5:00 remaining, and again with 32 seconds to go, with those tallies sandwiching an assist on a Tommy Olczyk goal. The burst enabled George Saad to win it in overtime, capping an incredible comeback that this blog rated as the fourth-best game in Greenberg Ice Pavilion history.

Exactly one month later, the storyline was not quite as positive. At the ACHA National Tournament in Strongsville, OH, a bizarre altercation between Kirchhevel and Oklahoma goalie Nick Holmes as the second-period horn sounded (and at the opposite end of the ice from the play at the time) resulted in a head butting major to Holmes and an unsportsmanlike double minor to Kirchhevel. With Holmes required to serve his penalty, the Icers took advantage of cold backup Colin Fernandes, scoring two decisive goals in the first 61 seconds of the third period. PSU took the quarterfinal matchup 6-3 (including an empty-netter) in what would be the final victory of the Icers era, but Gadowsky benched Kirchhevel for the fateful semifinal contest against Oakland.

Thanks largely to the surprising competitiveness of the Nittany Lions in 2012-2013, Kirchhevel took a smaller-than-expected role, but was still a valuable presence when in the lineup thanks to his hockey IQ and quiet leadership.