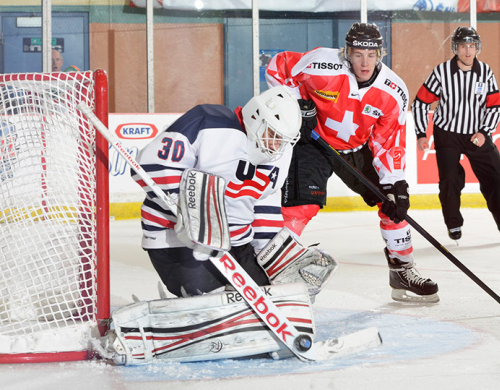 Following a tryout held Monday through Wednesday in Ann Arbor, MI, freshman goaltender Eamon McAdam was not one of the four netminders invited by USA Hockey to its 2013 National Junior Evaluation Camp, which will be held August 3rd through 10th in Lake Placid, NY.

The evaluation camp is used to help select players for the team that will represent the United States at the 2014 IIHF World Junior Championships, which will be held December 26, 2013 through January 5, 2014 in Malmo, Sweden. Following the August camp, the list will be pared down to form a preliminary Team USA roster in early December. After a training camp and exhibition games, a handful of final cuts produce the roster that will head overseas.

The goalies getting the green light to that next phase of selection were U.S. National Team Development Program products Thatcher Demko and Collin Olson, Providence's Jon Gillies (a member of last year's WJC team) and Anthony Stolarz, a 2012 second-round draft pick of the Philadelphia Flyers who will make a second consecutive selection camp appearance.

Given the USA Hockey backgrounds of the four goalies picked, it's probably fair to say that McAdam was always a longshot - if you think everyone was starting from zero, you're probably new to the selection of hockey teams. The silver lining, if you're a sour grapes type of person, is that just in the first NCAA season, Penn State has already beat two of the four WJC camp goalies. On January 11th, Kenny Brooks, George Saad, Joe Lordo and Tommy Olczyk all scored on Demko, with Brooks adding an empty netter in a 5-2 win over the NTDP U18 team. Olson, who is now at Ohio State, surrendered five on 37 shots - two each for Casey Bailey and Taylor Holstrom, one for Curtis Loik - in PSU's 5-4 win over the Buckeyes at the Three Rivers Classic on December 29, 2012.

McAdam, a late-ish 1994 birthday, will be 19 one year from now and therefore still has a shot to get WJC selection on his resume. But for now, both he and Penn State's program (the next PSU WJC nod will be the first, obviously) both have to wait.

Previously, Minnesota head coach Don Lucia was selected to lead the 2014 WJC team, and he'll be assisted by Bob Motzko (St. Cloud State's head coach), Greg Brown (Boston College's associate head coach) and David Lassonde (an assistant at Denver). The Big Ten, beyond Lucia and Olson, will be well represented among the 40 skaters invited to the August camp last week (via USCHO): 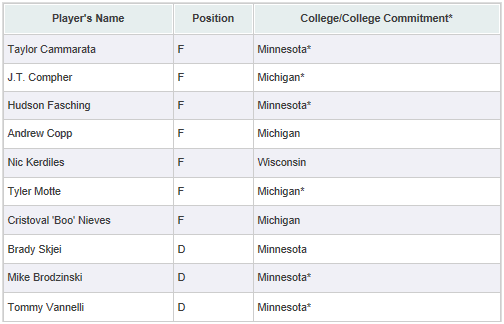 Team USA has become a power in the WJC, arguably the biggest tournament in amateur hockey, in recent years. The Americans took gold in January in Ufa, Russia, and have claimed two other gold medals (2004, 2010) as well as two bronzes (2007, 2011) from the last ten competitions. At the most recent edition, BC's Johnny Gaudreau scored seven times and was complimented by Pittsburgh native John Gibson's 1.36 goals against average in Team USA's title effort, capped by a 3-1 win in the final over Sweden.

McAdam will now turn his attention to June 30th's NHL Entry Draft, where he's projected to be a mid-round selection.
Posted by Kyle Rossi at 1:41 PM