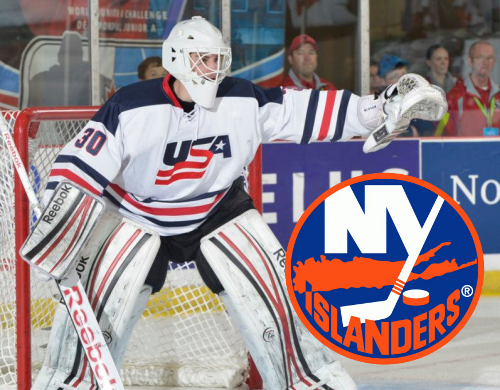 The New York Islanders have made freshman goaltender Eamon McAdam their 3rd round pick, 70th overall, at the 2013 NHL Entry Draft, held Sunday at the Prudential Center in Newark, NJ. He was the 6th goalie to come off of the board, roughly in line with advance expectations, although his overall draft position was about one full round earlier than most anticipated.

McAdam becomes the first Penn Stater taken in the draft while affiliated with the young NCAA program. On the Nittany Lions roster, he joins junior forward Max Gardiner (2010 3rd round, 74th overall, by the St. Louis Blues) and junior defenseman Patrick Koudys (2011 5th round, 147th overall by the Washington Capitals) in having his rights owned by an NHL team. Both Gardiner and Koudys were scooped up while committed to their previous schools - Minnesota and RPI, respectively - before later transferring to PSU.

In the Islanders, McAdam joins a franchise whose struggles since their early 1980s dynasty are well documented. The team has qualified for the playoffs just five times since 1994, and has not won a single playoff round in those appearances. Furthermore, financial struggles at the outdated Nassau Veterans Memorial Coliseum in Uniondale, NY have prompted a move to the Barclay's Center in Brooklyn, NY by the 2015-16 season.

That said, the team itself is on the rise, as the Isles have assembled a very strong prospect pool. One weak spot, however, is in goal. The team presently has zero goalies under contract at the NHL level, so it would seem that AHLers Kevin Poulin and Anders Nilsson (rated the organization's 9th and 10th best prospects according to The Hockey News) may be in line for a promotion. The Islanders also own the rights to 2009 second-rounder Mikko Koskinen, who is playing in Finland. Cody Rosen, a 2010 seventh-round pick who just completed a four-year career at Clarkson, is also listed on the Isles' prospect roster, although according to Lighthouse Hockey, he has been let go by the club.

Just 36 slots after choosing McAdam, New York scooped up another goalie with the 106th overall pick in the fourth round: Minnesota State-Mankato sophomore Stephon Williams, who paired up with McAdam in the crease of the 2011-2012 Waterloo Black Hawks. And just prior to the draft beginning, the Islanders signed former Boston College goalie Parker Milner as a free agent. Suffice it to say that the team is hoping that their goalie of the future emerges from within.

The NHL Entry Draft is the culmination of what, in most respects, has been a pretty incredible year for McAdam, starting with the Junior Club World Cup last August when he led the Waterloo Black Hawks to a silver medal while winning the tournament's top goalie award. He also participated in the inaugural CCM/USA Hockey All-American Top Prospects Game in September before winning gold with Team USA at the World Junior A Challenge in November. McAdam burst into the mainstream, SportsCenter included, with his MVP performance at the USHL/NHL Top Prospects Game in January that included one of the saves of the year at any level of hockey. In his regular gig, with the Black Hawks, he went 17-9-3 with a 3.45 goals against average and a 0.896 save percentage to help the team to a playoff appearance.

At Penn State, McAdam is expected to step in and immediately compete for time with returning goalies Matt Skoff and P.J. Musico. Skoff closed 2012-2013 as the number one guy in the Nittany Lions' crease, winding up with a 9-8-0 record, a 2.48 goals against average and a 0.921 save percentage. The Perkasie, PA native and Team Comcast product's CHL rights are owned by the London Knights, who drafted him in the fourth round of the OHL draft in 2010.
Posted by Kyle Rossi at 7:59 PM