Breakout Past: Battista Scouts The Cyclones

At the conclusion of a 19-6-3 1989-1990 regular season, Joe Battista's third as Icers coach, Penn State entered the 1990 National Invitational Tournament in Athens, OH as an uncharacteristically heavy underdog. PSU was the sixth seed (of eight), and also faced a pool including host Ohio, a 24-1-0 team that hadn't lost at home in three years. No big deal. John Gray's 49 saves included a shutout of the Bobcats over the final 40 minutes and John Ioia's power play goal was the winner in a 5-3 victory on March 1, 1990, following a 6-5 win over Arizona in the tournament's opener.

Beating OU clinched first place in the Icers' four-team group and a berth in the championship game, so PSU mailed it in the next day and lost 7-1 to Wisconsin-Whitewater. It wasn't time off for Battista though, as he scouted an Iowa State-North Dakota State game in the opposite group that determined the other participant in March 3rd's final. Via Special Collections at the Penn State University Libraries, here are the notes he took during the game. Click to enlarge. 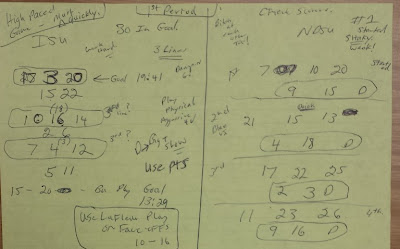 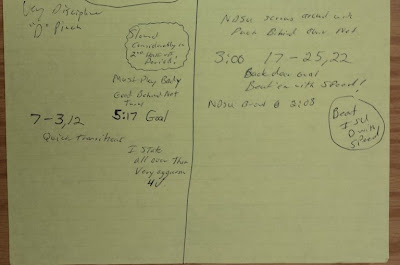 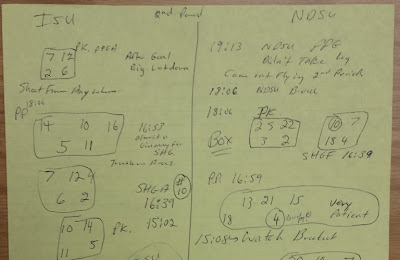 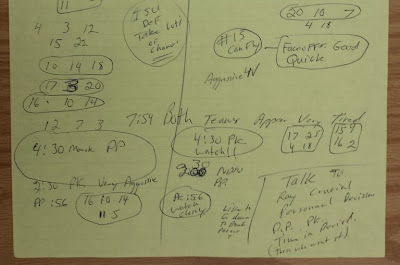 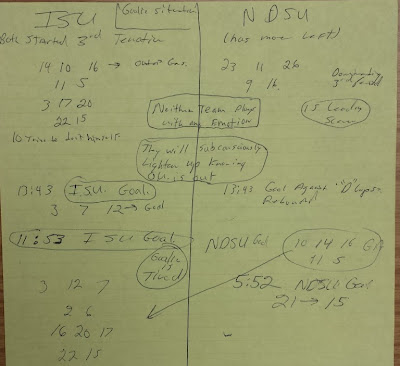 One thing seems pretty clear: Battista viewed ISU as a spent team. Before the first intermission, he observed that they "slowed considerably in [the] 2nd half of [the] period. In the latter stages of the second period, he wrote "both teams appear very tired," and by the beginning of the third period, he believed that NDSU "has more left," that the Cyclones' "goalie is tired" and that one of Iowa State's forward lines is "out of gas."

A lot of that may have had to do with how ISU coach Al Murdoch had the team playing. Other notes on his team pointed out their aggressive forecheck, quick transitions, and individualistic tendencies, along with the fact that the game at hand was played with a lot of pace, requiring quick changes. Battista didn't seem to be a fan of the Cyclones' blueliners, classified as big and slow, fond of taking chances, and able to be beat with speed, as happened on a late first-period goal by the Bison. Towards the end of the game, and spanning the columns for both teams, Battista wrote that PSU's opponent "will subconsciously lighten up knowing OU is out."

So... what to do with all of that knowledge? Easy. Apply it to your last-minute coaching before Penn State battled the Cyclones for the national championship. 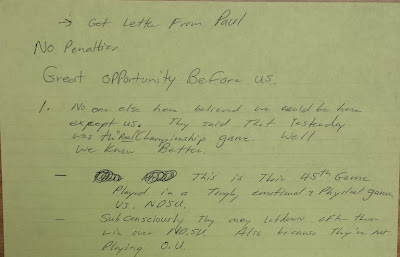 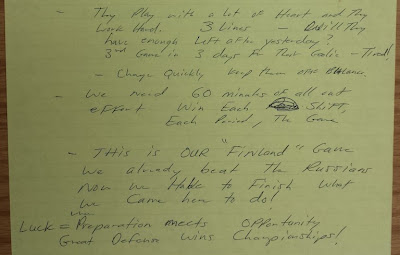 It's simple to find where Battista incorporated his ISU-NDSU observations:
And here's one for fans of the Miracle on Ice:
At the very top of the page, Battista reminds himself to get a letter from "Paul," meaning former Icers faculty advisor Dr. Paul Cohen. Here is that letter. 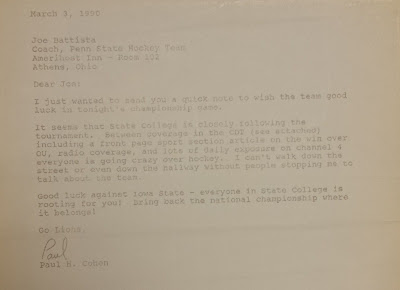 The legwork ultimately proved successful, of course, as Andy McLaughlin scored with just over three minutes remaining to boost Penn State over the Cyclones 4-3. Midge Hutchison, Chris Cervellero and Jim Adams also scored, while Gray made another 35 stops. Afterwards, what PSU's head coach told The Daily Collegian should be obvious to anyone who has read this far.


"Iowa State was a better hockey team on paper," Battista said. "We knew they were tired though from their Friday night game against North Dakota State."

I'd argue that, in fact, Penn State was the better hockey team on paper, provided that the paper comes from a standard-issue legal pad.
Posted by Kyle Rossi at 1:00 AM