Breakout Past: Hockey's Icers Are Hot

The following was reproduced from the January 1999 issue of Town & Gown, a monthly magazine covering the Penn State and State College communities. 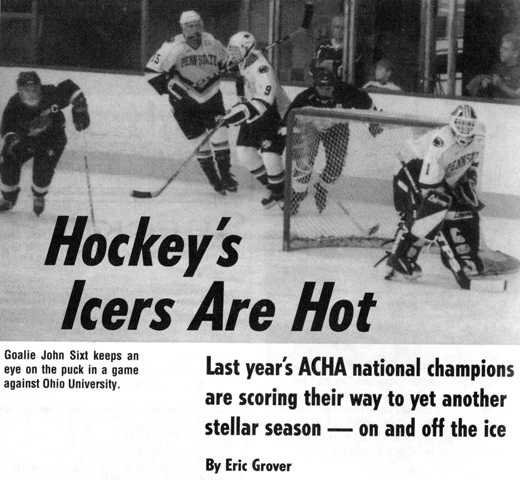 From sponsoring charities to helping with the State College Youth Hockey Association, members of the Penn State Nittany Lion Icers Division I club hockey team work hard to help in the community. And it can be said that State College likes hockey and loves its Penn State Icers, so when game time rolls around, community supporters are there for the team.

The Icers began their run as the modern-day Penn State ice-hockey team in 1972. They have been Mid-Atlantic Collegiate Hockey Conference (MACHC) playoff champions twice, garnering their first title 20 years ago. That year they placed four players on the MACHC All-Star Team, including defenseman and current Icers head coach Joe Battista.

In 1984, Penn State captured its first American Collegiate Hockey Association national championship. This victory ended two years of agonizing misses - the team had placed third in 1982 and second in 1983 - and put Penn State ice hockey on the map nationally.

A trip to the Ice Pavilion in Penn State's Greenberg Sports Complex offers a visual trip through the storied history of Penn State hockey. The ACHA Murdoch Cup sits in the window of the manager's office. Up in the rafters above the team boxes are a row of championship and team banners that run from one end of the pavilion to the other. They include championships from the Nittany Lion Invitational Tournament and MACHC. The most recent championship banner was hoisted into the rafters last October, before the season opener against Ohio University. Penn State President Graham Spanier was on hand to watch the banner-raising commemorating the Icers' 1997-98 ACHA championship season and to drop the ceremonial first puck.

The Icers don't receive athletic scholarships but play because they love their sport. Their deeds and accomplishments on and off the ice are impressive. Several personal goals were realizing on the ice last season. Goalie John Sixt, a senior majoring in geoenvironmental engineering and petroleum and natural gas engineering, posted 18 wins, making him the third-winningest goalie in a season. Senior kinesiology major Don Coyne broke the record for points by a defenseman in a season, a distinction once held by Coach Joe Battista. Coyne and fellow senior Jason Zivkovic also broke the record for career points by a defenseman, finishing in a tie with 153 points each. These accomplishments, plus a team record of 31-5-1 and championship crowns from the Chicago Classic, Nittany Lion Invitational and ACHA national tournaments, help to endear them to their fans. 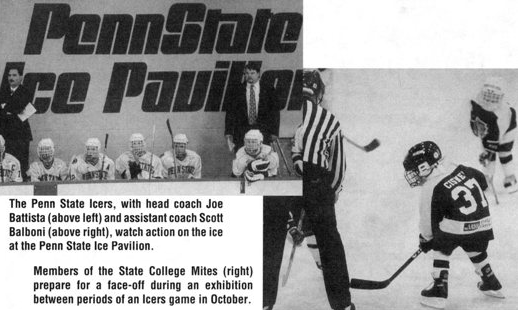 In 1989, the Icers captured their first International Collegiate Hockey League Championship. Trailing toward the end of the title game, the team stormed back to retake the lead at the very end. This hard-fought championship paved the way to the ACHA national and NLIT championships in 1990. From that first international championship to their most recent in 1998, the Icers earned awards through hard work and perseverance.

Coach Battista was a two-time MACHC First-Team All-Star during his playing days at Penn State, 1978-82. He was named to the NLIT All-Tournament Team and was team captain and MVP his senior year. He ended that year as a defenseman with 50 points. He currently ranks fifth among all Icers for most career points by a defenseman with 138 points in 92 games.

After graduating with a marketing degree, Battista began work as director of amateur hockey development for the Pittsburgh Penguins. He was the coach of the Jr. Penguins and twice led them to the 3 Mid-Am championships. He then took coaching positions at Kent State and also Culver Military Academy. He led Team Pittsburgh to a third-place finish at the Chicago Showcase in 1985, and coached the West Squad to five gold medals at the Keystone State Games.

He was been actively involved in various USA Hockey Development Camps, including Midget Elite in Colorado Springs, regional camps in Lake Placid, Bantam Development Camps at Penn State and the USA Hockey Coaching Program. He is a former president of the American Collegiate Hockey Association and current directs the highly successful Penn State Hockey Camps held each summer at the University Park campus. The summer camps, held every year for players ages 11 through 18, are staffed by coaches from top colleges and prep schools around the country who teach skill development (for more information about the camps, call 865-0561).

Coach Battista also helps various charities, such as the American Lung Association and other area groups. Under the watchful eye of JoeBa, as he is affectionately known, the Icers have a work ethic and sense of dedication that has evolved into a program that includes full-scale community involvement. 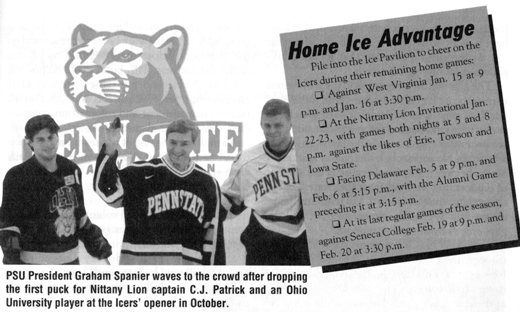 The community's support and the willingness to reciprocate is evident in many things the Icers do. "It is sometimes difficult for us to get a lot of student fans to come to the games because they are on Friday nights and Saturday afternoons," says Sarah Nonnemacher, director of marketing for the hockey team, "but because of the amount of support that we have from the State College community the Pavilion's 1,350 seats are almost always full. We really appreciate that, and the guys enjoy returning that support."

Two ways the Icers return this support are through their Icers' Kid's Club and Meet the Icers events. The Icers' Kid's Club program was started to involve children directly in the spirit of the sport. For a small annual fee, each child gets a free program, a mini stick and a puck and can win a skating pizza party or chances to be a stick boy or girl at Nittany Lion games. The Meet the Icers events give kids and other fans chances to meet, get autographs from and sometimes even skate with players.

In addition to these promotional events, players also work hard to promote local charities, such as collecting food for the Community Food Bank. For two weekends last December the team held a "Chinese auction" at home games. For every can that fans brought to the game for the food bank, they won a chance for a prize of their choice.

The players are also involved with the State College Youth Hockey League, where many Icers volunteer time to help out at practices for the State College Mites and Squirts. The Icers aim to be role models for younger fans, not only on the ice and with civic volunteering, but also on a personal level. Hard work both on the ice and in the classroom helped place seven Icers on the dean's list last year, with Jason Zivkovic posted a 4.0 GPA. He and Joe Bassett (senior, civil engineering), Jurgen Cautreels and C.J. Patrick (senior, management and information systems) earned ACHA Academic All-American Honors.

Patrick and the rest of the team have chosen the American Lung Association as this year's team-sponsored charity. He and Coach Battista helped with a skating event that the ALA held at the Ice Pavilion.

In addition to players' volunteer work in the community, they are attempting to develop an organized hockey-mentoring program with the State College Youth Hockey League. The program will send Icers to youth-league practices to help teach skills and assist coaches with instruction.

By lending a hand, the Icers not only get a chance to give back but also receive much in return. "It is so important for our team to get involved with programs like the ALA because we are given so much by the fans who attend our games and our sponsors," says Patrick. "Because we are given so much, it is necessary for us to give back to the community. I, as well as my teammates, enjoy doing things like working with the ALA and the State College Youth Hockey program because you can see how excited the kids get to have us there. It is really fun to work with kids who want to learn or just have a good time. I get just as much out of these programs as the kids do."
Eric Grover is a senior at Penn State who completed an internship with Town & Gown in December 1998.
Posted by Kyle Rossi at 2:19 PM