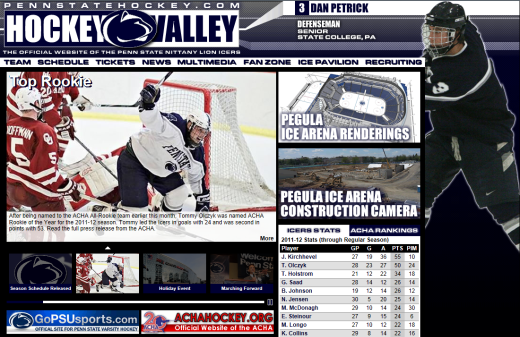 PennStateHockey.com, the Icers' website, has put up a splash page with the following message:

After decades of work and perseverance, the dream is becoming a reality starting this fall - varsity hockey is back at Penn State! One minor portion of that involves this website - specifically, this domain name. Beginning next month, the PennStateHockey.com URL will automatically direct you to a re-designed, men's varsity hockey page on GoPSUSports.com. The address will remain valid for some time after the switch as well.

After links to the GoPSUSports.com men's hockey site and the Pegula Ice Arena renderings and construction camera, the page continues.


All of the information that was contained on the "club" site may still be accessed at the address: www.clubs.psu.edu/up/PSUIcers. This ends a 16-year run for me as the webmaster for this site. I would like to thank everyone for the kind words and compliments over the years. It has been an honor to be involved with such a tremendous program.

"Me/I," of course, is Rodney Martin. The Penn State Hockey Hall of Famer, Class of 2007, also serves as our top-shelf PA announcer in addition to his webmaster and other duties.

There are many little things that have and will come and go throughout this transition, and I won't post about all of them. Then again, this is not a little thing. For years - 16 of them to be exact - and through several upgrades, the Icers had a website that was easily the class of the entire ACHA and probably the NCAA as well. If you don't fully grasp how fortunate we were to have it, you've probably never done things that involve researching other teams like assemble an Icers media guide or write a Penn State hockey blog. As someone who has done both of those things, take my word for it on the evaluation. I'm sure that throughout the remainder of TYT's life, I'll run into instances where I'll miss something on there that I did take for granted. That's not at all a knock on the new primary official site, it's a testament to the pure depth and quality that preceded it in representing Penn State hockey's internet presence.

I'm often self-effacing about TYT's popularity, but much of what this blog does enjoy traces back to the 2010-11 season, when TYT enjoyed a brief placement on PennStateHockey.com's front page right after its launch. 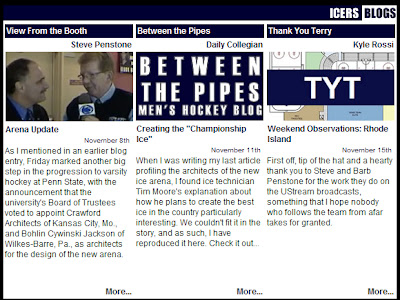 While it (along with the Collegian) was removed due to its unofficial status after about six weeks - a decision I completely understood and even agreed with - the site to this day remains the fifth largest source of TYT traffic. Most blogs are abandoned within one month of creation, so it's easy to see the significance of getting an audience size beyond anything I ever imagined that quickly (incidentally, the post shown in the above image is dated November 15, 2010, three days shy of TYT's one-month anniversary). It was a class move by a class guy running a class website. And yes, it deserves some of the credit for TYT's still being here today.

Best wishes in "retirement," Rodman!
Posted by Kyle Rossi at 2:07 AM