First off, please accept my sincerest apologies if you don't find this post newsworthy. Some blogs post every time anything at all relevant comes up, and while there's nothing wrong with that, it's generally not how this one has operated. If it's not a pressing story of immediate concern or if I don't have more than 100 words to say about it, I tend to save it for Three Stars on Mondays. This, however, is too long for a Three Stars entry, and because I'm a jersey geek who doesn't mind shilling once in a while (and because it's June)...

So anyway, I stumbled into this last night, on the website for a company called Tiedman & Formby: 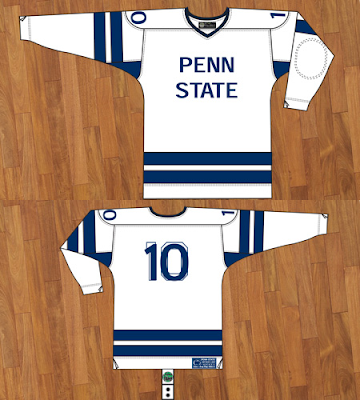 It probably shouldn't fascinate me any longer when someone merchandises Penn State hockey now that we're wearing big boy pants. Still...wow. For those who don't know, that's the jersey of one Joe Battista. 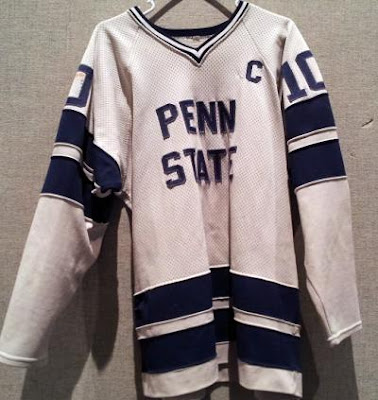 I hate to have anything bad to say about something so clearly awesome, but I hope they just slapped some Arial on the website picture as a placeholder. Obviously, both letters and numbers are of the block variety, and although such things certainly aren't my department, likely very easy to reproduce. Since I didn't think to take a picture of the back of Battista's jersey at the alumni banquet in February, here's the best I have to offer. 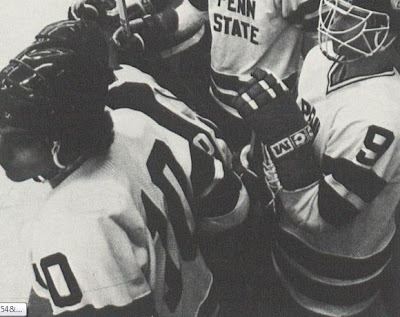 These are clearly coming from someone who did his or her homework. Not only did they get Battista's number (many of the company's products simply use the last two digits of the year being honored), but they pulled this rather obscure nugget from Icers history: 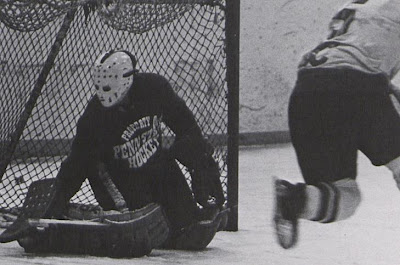 As you may have gathered, I'm normally a stickler for accuracy, but I'm actually okay with the omission of "PROPERTY OF" in this case, as that's one of the more obnoxious concepts in sports apparel (in my opinion, anyway, and probably because it's stating the obvious). Still, I would've gone a different route. If you need blue, instead of a practice jersey with a font from a wanted poster, how about a Josh Brandwene special in the model that won the 1990 National Invitational Tournament? 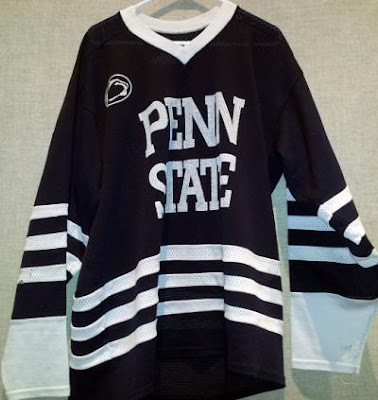 Really though, the biggest problem, other than the font thing, is that these aren't for sale yet. From what I gather by reading the website, a lot of it has to do with licensing issues since the company just relaunched in 2009.


Tiedman & Formby is restricted from selling directly to customers for certain institutions for which we are licensed (it is a rigid system!). Please contact us directly if you cannot find a jersey in your team or local area; it may mean that we simply could not get the license for your team, in which case, we would ask you to sign our petition to resubmit to the licensing directors of those respective institutions.

Some good news: T&F have already successfully licensed several Penn State American-style football throwbacks including Franco Harris, John Cappelletti, Curt Warner and a special No. 66 jersey in tribute to Joe Paterno, so at least the university has proven willing to work with them. Another postive, related to the Battista jersey, is that it seems as if the representations on the T&F site don't always match up perfectly with the actual product. But if you've seen any of their jerseys around (or even own one), I'd be interested in hearing your opinion on their quality and authenticity.

Rest assured that I'm contacting them through their form (click here for that) to offer my assistance in getting their hockey products into the marketplace. I hope you consider doing the same. Companies interested in Penn State hockey - and that seem to be socially responsible as well - deserve our support.
Posted by Kyle Rossi at 4:13 AM