Penn State hockey has released information related to men's ticket packages for the coming 2012-2013 season. There are three five-game packages on sale, and they look like this: 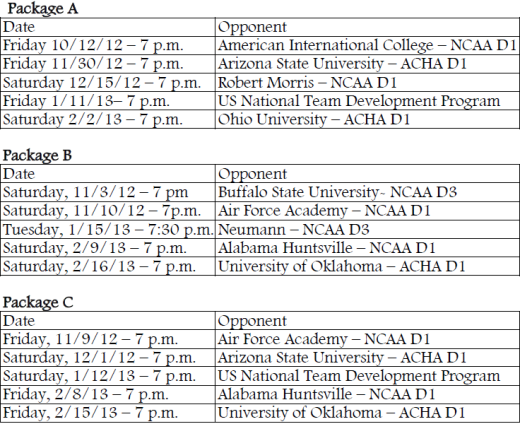 Significantly, these plans are the only way (for adults anyway, nothing has been released regarding student tickets, which I'm assuming will be handled separately) for new buyers to get something more than single game tickets for this season, as full-season packages are only being offered as renewals for Icers season ticket holders from 2011-2012. Furthermore, the packages carry a maximum of two per customer, due to high demand. While customers may select a package, it's recommended by PSU staff that they instead select "no preference" to maximize flexibility for Athletic Ticketing Services (and therefore the customer's chance of getting tickets).

There is good news, however. The five-game packages cost an extremely reasonable $50, plus a $5 processing fee, payable by check or credit card (Michigan State, just to use a peer-institution example, offers their season tickets for $17 or $15 per game). And, of course, acquiring any sort of package for this season guarantees priority for 2013-2014 in Pegula Ice Arena. Given that the PIA will be six times larger than the Greenberg Ice Pavilion, it's probably safe to say that if you're one of the fortunate few to get a ticket package this year, you won't have any issue next year.

I hate to sound too much like a PR lackey, but if you're interested and haven't done anything about it yet (yay foresight), you should probably get on this ASAP. To do so, contact account rep Lauren King at (814) 865-5996 or lking@psu.edu. I've also uploaded the order form attached to the email I received with all of this information, which hopefully expedites things for some of you. From the order form, it appears as if those with Nittany Lion Club priority points will get first consideration among new buyers.

It is mentioned that payments will be processed on June 12th. I'm guessing they plan on being completely sold out by then. UPDATE 6/12 9:50 a.m.: That date was processing for renewals only, as new sales opened at that time.

So basically, good luck and hope to see you at the games!
Posted by Kyle Rossi at 11:45 PM

Email ThisBlogThis!Share to TwitterShare to FacebookShare to Pinterest
Labels: tickets