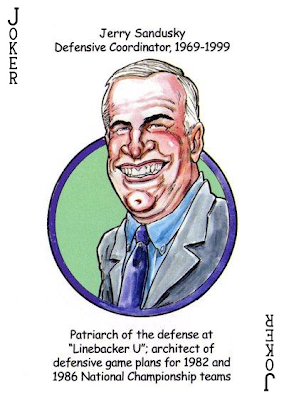 Unfortunately, I was unable to find a press release on this, but...

Matt Bertani, who served as an Icers assistant from 2005-2008, is the new video coach for the New York Islanders. Quite an impressive career track, to say the least. He left PSU to assist with the Islanders' AHL team, the Bridgeport Sound Tigers, where he remained until now (surviving a head coaching change in the process, which shows a good deal of organizational faith). He's a dyed-in-the-wool ACHA guy, as he played with Mercyhurst's club team and he also developed some pretty diverse experience as a youth hockey coach prior to coming to PSU.

Actually, it's a meteoric rise and a great comeback story - you may recall that Bertani was nearly killed in a men's league game last year while suffering a broken neck in a collision. Congratulations Matt!

1. Jerry Sandusky guilty on 45 of 48 counts
(The Daily Collegian)

I hope that this isn't taken as minimizing the trauma of those who came into physical contact with Jerry Sandusky and who then stood as his accusers, but we were all his victims. The justice system has done what it could with him - he'll likely spend the rest of his life as the worst type of person one can be in prison - and for that I'm glad. I just wish it could give us back what we've lost in transit to this point.

This story will likely fade from the national media's consciousness now, although the appeals, the civil suits, the Freeh report that already smells like a sham designed to pin this all on "football culture" (whatever that means), the hopeful unmasking of all in Penn State administration who kept what I suspect was a "well-known secret" at the highest levels of university governance...all of those things make this an awkward sort of semi-closure. They will keep picking at the scabs and delaying the already imperfect healing process. The good news? We are Penn State. Emphasis on "we," because Penn Staters, collectively, are what makes Penn State great. Keep excelling at whatever it is you do in life. Live the last verse of the alma mater. Do it while wearing a PSU shirt, if possible. Take the hits you'll undoubtedly receive for doing so, but keep moving forward.

We are Penn State, and we will eventually take our university back.

PS. I'm absolutely stunned that more people haven't pointed out that Sandusky is one of the jokers in the unlicensed Penn State Football Heroes playing card decks sold at PSU retail outlets for several years. The actual cards simply have footballs in the top left and bottom right corners, so I took some artistic license there. 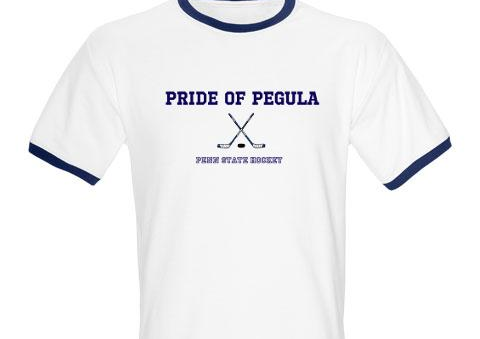 Dooooo itttttttt.... you know you're going to want to white something out at a hockey game at some point. Pictured: my likely first purchase.

Penn State back in play for Army hockey
(recordonline.com)

The October 26th game at Army is one of my favorites this year. The Black Knights are one of just three currently-active Division I programs played by Penn State's original 1940-1947 varsity team, and the only one on this year's schedule (Cornell and Colgate are the others). I'm glad that fact hasn't gotten lost.


Penn State will play on Oct. 26 at Tate Rink, the first visit by the Nittany Lions to West Point since 1947. The school dropped varsity hockey after that season and has competed as a club program in recent years. Penn State will compete as a Division I independent this season and join the new Big Ten conference in 2013-14.

"Recent years?" Makes it sound as if the Icers started up in 2004. Oh well, nobody's perfect.

Included because it brings up an interesting idea, forwarded mostly by people who hate Penn State: could the NCAA sanction PSU to the stone age? While anything is possible, I don't believe they will, because the simple fact is that none of what happened affected the on-field product in any way. When the NCAA speaks of "lack of institutional control," it's in the context of breaking NCAA rules, which are in place (generally) to ensure fairness in the realm of athletics (that's what the first "A" is for, after all). I question whether the NCAA has the jurisdiction to punish PSU for this. I also question why this story gets coverage from ESPN, but that's a different rant.


Even if the NCAA wants to bring penalties on Penn State athletics, where do they begin? As I said, this is not a football crime, regardless of how it has been portrayed. If a penalty comes, it has to be big. It has to be everybody from women’s basketball, to wrestling to baseball and fencing. A hockey team that doesn’t yet exist would be penalized. Will the NCAA punish hundreds of athletes because of the wrong-doings of an administration? Has there ever been an NCAA punishment that didn’t involve a single athlete committing a single infraction?


Under Construction for the Pegula Ice Arena!
(I admit)

An updated PIA photo from a likely, yet not, source - a PSU Undergraduate Admissions blog.

Every once in a while, I come across a little reminder of big-time status that blows my mind. This is one of those, even though there aren't any tickets up yet.

With the NHL Entry Draft in the Steel City Friday and Saturday, local media did not disappoint with the easily-predicted "yay Pittsburgh hockey!" articles. But hey, good PA hockey is good for Penn State. And Robert Morris. So yay, indeed.

Signs point to Federal league in Williamsport
(Shooting for the Show)

Closer to the other end of the commonwealth, it looks as if Williamsport might be getting a taste of our favorite sport.

Connecticut jumping to Hockey East, to 18 scholarships for 2014-15 season
(USCHO)

The headline more or less says it all. Hockey East finally has their 12th team, and hopefully UConn will prove worthy of it because a successful big school in a big conference is good for college hockey. They're adding the full 18 scholarships (up from zero) and will play home conference games at the XL Center, formerly the Hartford Civic Center, also formerly the home of the Hartford Whalers. So yeah, I'm dropping some Pat Verbeek on you.

And just because I haven't done this in a while, here's how the conferences stack up, beginning in 2014. The only change from 2013 to 2014 will be the Huskies' arrival in Hockey East from Atlantic Hockey.

Still Screwed, But Hoping the WCHA Has Mercy (1): Alabama-Huntsville.

Don't bother memorizing it, I'm sure it will change before 2014 in some way.

Sounds like TPegs might finally be looking to shut Canisius up. Yeah, I thought their begging for a handout was a little gauche - and before you accuse me of hypocrisy, Pegula actually has a connection to Penn State and initiated the discussion with the school. So there. Anyway...


Sources said the Sabres are proposing a multi-rink facility, with a themed sports bar/restaurant to be developed by Delaware North Cos. for the block. The rinks would be used as a practice facility for the team as well as the home base for some of the area's collegiate hockey teams. It would also host amateur and youth tournaments.

According to Business First, the Sabres/Delaware North project also includes a hotel component, parking for 1,000 cars, and retail along both Main and Perry streets. There would be two rinks, one with spectator seating for a couple of hundred, the other with up to 1,500.

That's actually smaller than the rink of Division III Buffalo State, where the Griffs currently play. Then again, they drew 626 fans per game last year, fourth worst in DI, so I think they'll be okay.

Finally, happy birthday to Title IX - a landmark not only for female athletes, but for everyone who believes in equality.
Posted by Kyle Rossi at 1:51 AM