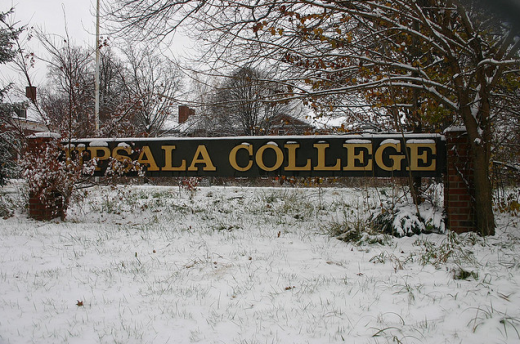 Upsala College has always fascinated me for a couple reasons. Traditionally, the school has appeared twice each year in Icers media guides - as the Ice Pavilion-opening opponent, and for the crowd of 1450 at that game that ranks in the top five all time (although at the time, the crowd was reported as 1287). Perhaps even more significantly, I've never heard of the school otherwise.

Well, as it turns out, there's a good reason for the second thing: it no longer exists. The East Orange, NJ Lutheran Church-affiliated college closed in 1995, and some buildings were incorporated into East Orange Campus High School, which was founded in 2002. The rest were demolished in 2006 to make way for upscale housing. In sort of an odd reality, Upsala's campus radio station survives, as its license was purchased shortly before the school's closing.

Details about the history of Upsala's hockey program, then, are understandably sketchy. It was affiliated with the NCAA Division III ECAC from roughly 1979 through 1988, playing out of the conference's North-South league from 1985, after a geographic adjustment. By the end of the Vikings' time in the the ECAC North-South, it featured several (previous, future, or both) Icers opponents, including Scranton, Villanova and Western New England as well as future DI teams Fairfield, Iona, Quinnipiac and Bentley (Fairfield and Iona are now defunct). According to a 1987 New York Times article:


Programs like these have overall budgets of about $30,000 and equipment costs run about $6,000. Recruiting is almost free. "We all know who the players are," said [former Iona coach Frank] Effinger. "Our scouts are alumni and friends who call and tell us where the good ones are."

Joe Battista, true to form, was pretty complimentary of his opponent as a senior tri-captain in 1981.

"Upsala is a very well-coached team," [he told The Daily Collegian on November 6th of that year]. "They award hockey scholarships there, and they draw a lot of talent from the New York and New Jersey areas."

Notable Vikings included a pair of goaltenders, Scott Buchanan (1980-1984) and Ron Emanuelson (1981-1985), both of whom were regular starters over each of their their four years. Although the Times article mentioned that Upsala primarily recruited in New Jersey, Emanuelson is a Connecticut native who played at Glastonbury High School.


It's probable that the school had a non-varsity team for some years before 1979 - Upsala was founded in 1893 by Swedes, after all, and their first meeting with the Icers took place two seasons prior to their being listed as an ECAC team. Despite that build-up and from the partial information available, it appears that the Vikings were not particularly successful once in DIII, as HockeyDB shows a 0.259 winning percentage on 87 games played from 1979-1988. They weren't much more than a speed bump for Penn State, either. Here's the series history, which ended 13-0-0 in the Icers' favor after a run of tight wins devolved into 48-7 over the last four games:

"@," for what it's worth, was the Waranoco Rink, located in a rough area just outside Newark, NJ (thanks to former Icer captain Glenn DeStefano for that detail).

It's ridiculously hard to find other evidence of the team's results, as most DIII schools don't keep highly-detailed media guides with an all-time schedule and results online. Also, and unfortunately, many of the nearby programs in the ECAC at the time that were likely frequent opponents - Iona, Fairfield, St. John's (the one in Queens), Ramapo, Queens College, Villanova, Scranton and Lehigh - are similarly belly up as NCAA hockey schools. Here's what I do have after checking every still-active school listed as being in the ECAC at the same time as Upsala, as well as every active eastern school in DII or DIII at the time Upsala was around, and merging with the PSU scores (this time from UC's point of view):

It seems obvious that Upsala hockey ran into severe funding issues right around 1984, which heavily damaged their ability to compete, and close losses (even wins in a couple cases) became blowouts.


I'll save discussion of the January 16, 1981 game, the "new" Ice Pavilion's opener, for a future Breakout Past, but there are still a couple of interesting things to point out within that list of PSU-UC games. In an odd coincidence, the second meeting between the teams was the last game at the original Ice Pavilion prior to its repurposing as a field house. Speaking of field houses, RPI's home Houston Field House was the site of the final meeting, via a tournament Penn State "hosted," thanks to a favor from former Engineers coach Mike Addesa to former Icers coach Jon Shellington. The Nittany Lion Classic was a one-time, three-team, round-robin, most-goals-wins tournament. The third team? Hawthorne College of Antrim, NH, which was also in the ECAC for hockey but preceded Upsala in oblivion by seven years. PSU did win the tournament, but even if it hadn't, it's not like anyone would dispute a claim to it.

In the October, 1983 series, Lynn Sipe was the undisputed star. The Bowling Green transfer and the all-time PSU points leader put home the tying and winning goals in the overtime victory, then had a hat trick in the next day's blowout.

The "Upsala era" for the Icers was largely the product of the scheduling needs of the independent period that followed PSU's withdrawal from the MACHC after the 1979-1980 season. Once the Icers joined the ICHL in 1985-1986, the series with the Vikings had already ended for good.

Not that it really mattered. By then, the college itself was already in trouble, with the hockey program a likely casualty in 1988 or shortly after (given the abrupt stop to the Upsala-Quinnipiac series, which had been good for two games a year, it wouldn't surprise me to learn that the Vikings had their plug pulled in the middle of 1987-1988 as the college's financial problems mounted, although Upsala's football program did make it through 1994, the last possible season).


Enrollment was declining as the tax base in East Orange continued to deteriorate. Fewer and fewer of the student body came from congregations of the Lutheran Church. The long hoped-for Christ Chapel was put off indefinitely and proposed as perhaps a multi - purpose "auditorium and chapel". Under - qualified students were admitted and contributed to a decline in academic performance. Students who had academic promise but few financial resources had difficulty paying their tuition bills.

The eighth President, The Rev. Robert E. Karsten, tried valiantly to save the school. From 1988 - 1994 he worked to bring up the standards and increase the enrollment. He began a series of overseas exchanges to increase international students' presence. He repaired the campus and tried to re-interest the former constituency. He proposed new construction projects and borrowed funds to keep the momentum going. The endowment was used for current expenses and the campus buildings were mortgaged. But the city continued to deteriorate, alumni contributions slowed, and the problems became overwhelming. Even a loan of $4 million by four Lutheran sister colleges in the Midwest could not begin to pay the debts that were rapidly accumulating.

By 1994, Dr. Paul V. DeLomba was called to fiscally manage the closing of the school. The time had passed when Upsala was able to fulfill its function. On Ash Wednesday, May 1, 1995, the Board of Trustees voted to disband the school on May 31st. The debt level was at $13 million. The enrollment was only 435.

It has to be absolutely devastating for anyone who cares about their school to watch that happen. As you might have guessed, the campus was rapidly reduced to a heavily-vandalized eyesore over the next decade before most of its remains were razed.


One of the reasons I'm a history geek is my fascination with beginnings and endings, which includes the idea that something like a 102-year-old college can just be wiped off the face of the earth with very little trace. I'd love to be a good enough writer to be able to say something profound about the transitory nature of this world and the people, places and things that inhabit it, but you get the idea. All that's really left of this particular place are a few remnants (the radio station, a couple buildings that are part of the high school, whatever turns up on eBay) and memories (a Facebook group for alumni, a dated-looking tribute website). There's also the occasional mention in the current record books of college hockey programs - and as with their cameo in PSU's version, it's usually not particularly flattering for the Vikings (as one other example, Elmira's 22-goal outburst in 1980 is still their school record for offense). I suppose by exploring a footnote of Penn State hockey history in greater detail, I'm doing my part to keep Upsala alive as well. Happy to do it.
Posted by Kyle Rossi at 12:42 AM

Email ThisBlogThis!Share to TwitterShare to FacebookShare to Pinterest
Labels: Breakout Past, History, Upsala