There are only 57 days until the first women's game at Vermont and the official dawn of the Division I era, and we're sort of in an awkward place where there isn't that much left to know about the teams for the coming season. At the very least, we're probably done with major announcements. Well, except for one: the jerseys (or sweaters if you prefer, but I'm going with "jersey" for the remainder of the post).

Before we find out where we're going, let's look at where we've been. I covered a lot of this in a Breakout Past back in April (there are better photos there, if you're interested), but one more quick review, starting with the original varsity team, is still in order. 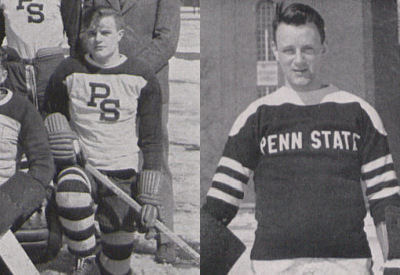 Those are the two designs worn by said varsity team, of course. 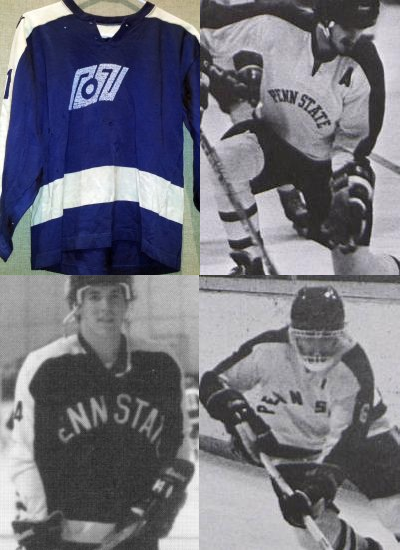 When the Icers started up in 1971, they wore the the jersey from the top left, above. Those were out after two seasons in favor of an arched "Penn State" design as seen in the other three photos. There were some inconsistencies with that second group of jerseys, as one might except from a new-ish club team (note the size, font and spacing of the lettering), but that general idea lasted through 1979.

Note: From here on out, just assume that an opposite-color counterpart to everything shown exists. 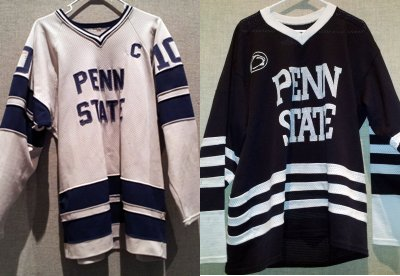 Joe Battista's sophomore season brought one of the longest-running jersey designs (above, left). It did undergo some alterations in the mid-1980s (slightly enlarged letters, a different striping pattern involving one broad stripe flanked by two narrow ones), but for the most part, this was the look for nearly a full decade. By 1988, it morphed into the above right jersey, which had a short but honor-laden life, including the 1989 ICHL playoff championship and the 1990 national championship. That latter jersey was also notable for the debut of official university branding, in the form of an oddly-placed chipmunk. In 1990-1991, the Icers introduced a look that would be substantially re-visited later on. 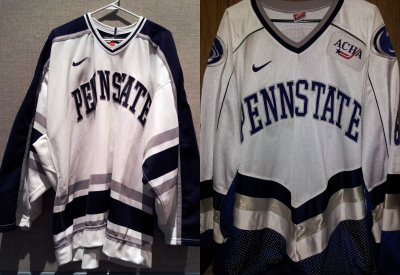 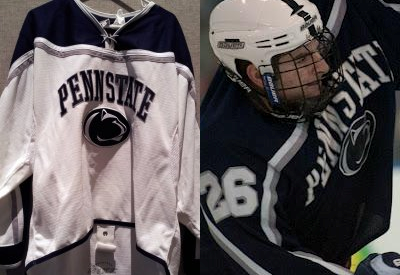 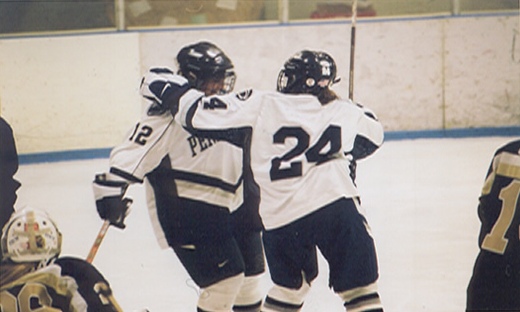 I'm not ignoring the women here, it's just that their jersey history is much simpler. For the most part, they've worn the 1998-1999 men's look (above), which gave way in the last couple years to... 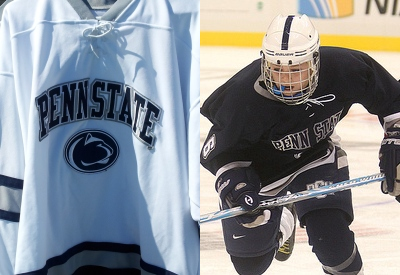 The backs of the jerseys are largely unremarkable - basic block numbers of contrasting color have been the order for both teams throughout their histories, with grey trim added to anything after 1990. Another thing that started around 1990 (for the men, anyway) was the presence of names on the jerseys. The earliest examples used basic letters in blue or white, as appropriate. It's worth highlighting the two styles that have popped up since 1998 though, since they're a little different. 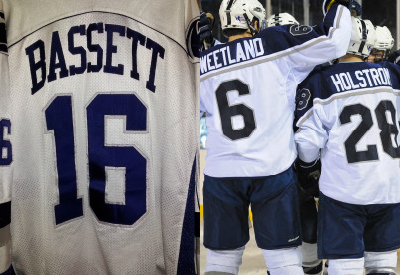 Why did I just do all of that? Well, because I like doing it, for one thing. But more importantly, I think history can help inform our opinions as to the next jersey. I can't speak for all of you, but here's what I think I want:

With all of that in mind, here is the revised TYT endorsement. First, the men: 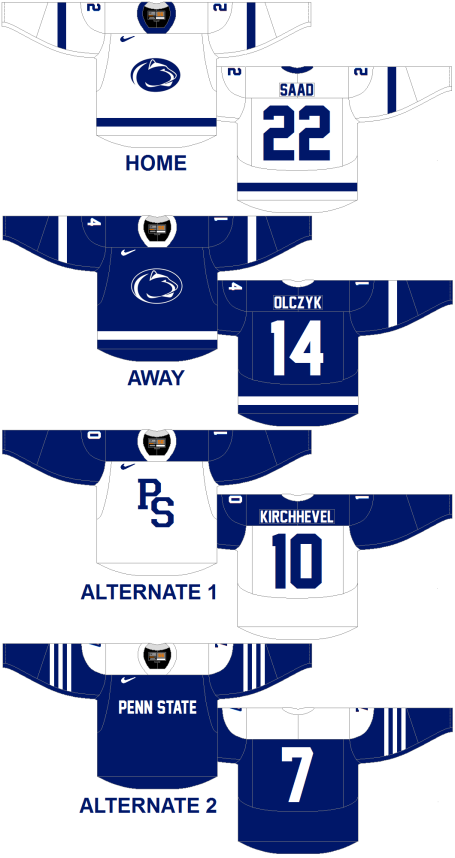 You may recall that I presented a previous version in a Three Stars two months ago. Well, as it turns out, those were nearly identical to Connecticut's jerseys. So the primary jerseys are essentially the same as before, except with the logo on the front instead of the "Penn State"/number combo (to be honest, I feel like they're going to go in that direction anyway). The alternates are, of course, throwbacks to the 1940-1947 varsity era. It would be insane to pass on the obvious symmetry there, and it would come close to making my season if PSU were to break out "Alternate 2" for the October 26th game at Army since, after all, Penn State likely looked like that at Army on February 12th, 1947, the second-to-last game of that original varsity team.

The women's jerseys I propose are similar, but not a copy. I think it's important that they retain a unique identity. 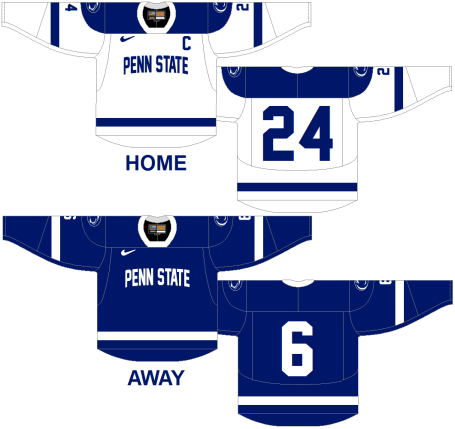 For these, I used the mid-1970s Icers jerseys as my starting point and tweaked them, adding the shoulder patch and sleeve stripes, as well as reducing the large contrasting area to just the yoke on the white jerseys and to nothing on the blues (in the 70s, it went all the way from the collar to the end of the sleeve on both white and blue, as you can see above). If you've been reading this post and not just scrolling to look at the pictures, you might note that I went the other way with the "tough choice" I mentioned. One of the perks of having two teams to work with.

Because I went without names on these, I should point out that they represent junior forward Taylor Gross and senior defender Lindsay Reihl.

Before I close, I want to make one more observation. While Penn State does not have the department-wide branding program of Michigan State, there is still something to be gained from looking at a couple of the other 29 PSU sports teams. If there is something that can be called the "Penn State look," it wouldn't be a terrible idea to get on that bus. 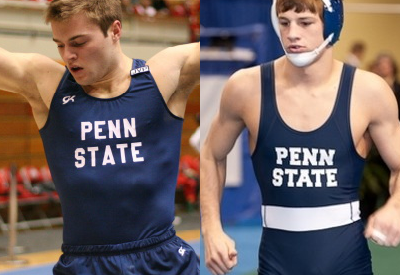 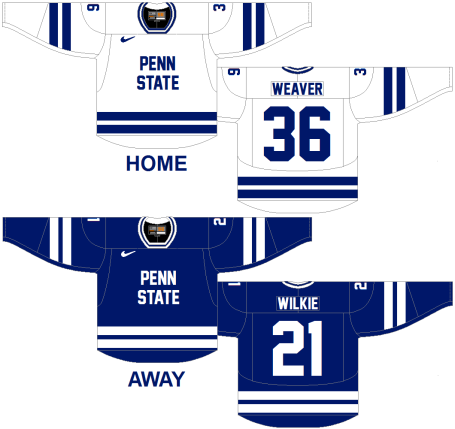 I could definitely live with that.
Posted by Kyle Rossi at 12:15 AM