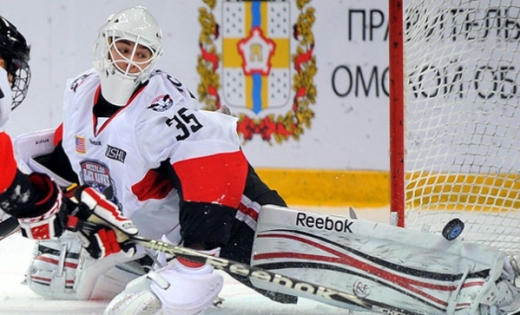 It's easy to forget that Sunday morning's game at the Junior Club World Cup in Omsk, Russia was just for the gold medal. After all, once the participants, the OHL's Sudbury Wolves and the USHL's Waterloo Black Hawks, were determined, the nascent tournament that had been somewhat of an afterthought suddenly had the attention of the North American hockey world. The reasons, though, were less about who would win the World Cup trophy and more about a clash of systems and ideals.

To many, this was a referendum on junior hockey. A Canadian major junior team and an NCAA team will likely never meet in any kind of meaningful context, but this was just about the next best thing, with college hockey's biggest feeder league, the only Tier I league in the United States, standing in.

No less of an authority than USHL commissioner Skip Prince has stoked the fires on the issue, saying almost a year ago that:


The USHL has quickly come of age, and we we’re not going to wear the mantle of second team comfortably any longer.

Prince, in that open letter to Edmonton radio program The Pipeline Show, also welcomed a hypothetical matchup with the Memorial Cup winner, saying that it would be a battle, provide some great hockey, and that "I like our chances."

If this was some kind of statement on the best junior leagues in the U.S. and Canada, the Black Hawks represented their side of things quite well. They fell 2-0 this time around, but also showed through an evenly-played game that if there is a difference between the caliber of the OHL and USHL, it's not very big and is probably narrowing. Considering the growth potential for hockey in the United States and the limitations on Canada keeping that pace, the answer could be quite different in a few years.

All of that is well and good but ultimately, all that was decided was the second annual Junior Club World Cup, and in that regard, Waterloo probably rather would have won than make some kind of disputable statement about the quality of their league.

Through 47 minutes and 50 seconds, it appeared that they had a great chance of doing just that. At that point, they were locked in a scoreless battle with Sudbury, with future Penn Stater Eamon McAdam playing no small role. While his teammates did a fantastic job keeping him clean for the most part, the big goalie had answered every time he was called, including 14 saves in the first two periods (part of an overall 22-for-24 line). He was particularly special on special teams, helping the Hawks kill their first three shorthanded situations, and turning away a breakaway chance from Sudbury's Matthew Campagna while Waterloo was on the power play in the middle of the second period.

Right then though, three issues that had haunted the Black Hawks all tournament combined to do the USHLers in: penalty troubles, post-goal hangovers, and general third-period sloppiness. With 12:05 left in regulation, the Wolves' Josh Leivo took control of the puck in the neutral zone, came in on a partial breakaway, got McAdam to extend while holding off pursuit just above the crease, and popped it past the goalie's left pad to break the deadlock. Twenty-nine seconds after that, Waterloo's Kyle Schmidt went off for tripping, and six seconds after that, Frank Corrado's high wrister through traffic beat McAdam for a second time. Just like that, a toss-up game had what would prove to be an insurmountable deficit for the Black Hawks.


Despite defeat in the final, McAdam's performances throughout the tournament made a strong enough impression for him to be voted top goalie of the tournament. His final stats certainly are worthy of such an honor: a 3-1-0 record, a 2.16 goals against average, a 0.914 save percentage, a shutout of the Czech Republic's HC Energie in Waterloo's World Cup opener and, of course, a silver medal.

Before the championship tilt, of course, Waterloo had to advance through the group stage and had to survive - and that is the proper word - a brutally tough semifinal.

The opponent? Linköpings HC, as daunting of a task as the tournament could offer. The Swedish entry, after all, is the defending champion of the J20 SuperElit, Sweden's top junior league. Not only that, but Linköpings was the only team at the World Cup to get through their group with an unblemished record. Their tournament-best +10 goal differential in that round, in fact, included a 6-3 win over the eventual champion Sudbury Wolves.

Through two periods, though, McAdam and the Black Hawks made it look remarkably easy. They outshot the Swedes 29-10 over the first 40, and thanks to goals from Jake Horton, Justin Kloos and Kyle Schmidt, Waterloo enjoyed a nice advantage in the only stat that matters as well at 3-0.

Some of the same issues that would later pop up in the championship game then made an appearance here as well. Linköpings scored four times in the first 10:15 of the third period, the last two of those coming on the power play, to move the Hawks from comfortable advancement to the brink of elimination via a late 4-3 deficit. Notre Dame commit Vince Hinostroza came to the rescue just in time, knocking home an equalizer with just 1.7 seconds remaining.

After a 10-minute overtime Hinostroza cemented his hero status, scoring twice in the deciding shootout, while McAdam played his part on the other side of things, stopping two of four attempts, the second of which clinched the win. In all, disregarding the shootout, he made 20 saves on 24 shots.

Here are some highlights from the Linköpings game, including McAdam's shootout-ending save:

Next up for McAdam: the CCM/USA Hockey Prospects Game on September 29th followed, of course, by the USHL season as a stacked Black Hawks team seeks to capture the Clark Cup championship that narrowly eluded them last season. For McAdam personally, both will give him a chance to get on to the radar of NHL scouts ahead of next year's entry draft as well as give him momentum heading to Penn State for the 2013-2014 season. Based on his performance at the World Cup, he certainly looks poised to seize all available opportunities.
Posted by Kyle Rossi at 5:04 PM