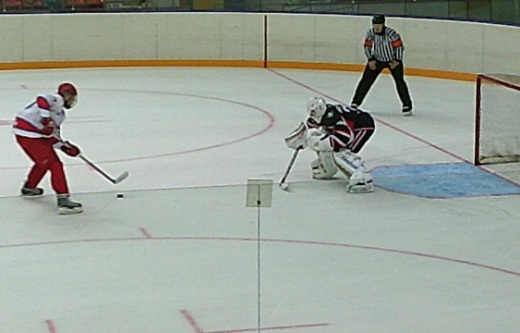 Eamon McAdam, a 2013 goalie commit, and his Waterloo Black Hawks teammates will begin pursuit of the second Junior Club World Cup Sunday morning against the HC Energie Karlovy Vary of the Czech Republic. The game begins at 8:00 a.m. eastern in Omsk, Russia, the site of all tournament games.

Waterloo will then complete a round robin of tournament's Group A with the following fixtures: August 20th vs. Dinamo-Shinnik (representing Belarus) at 4:00 a.m., August 22nd vs. the Norway national U20 team at 4:00 a.m. and August 23rd vs. Omskie Yastreby (Russia) at 8:00 a.m. Should the Hawks finish in the top two of the group, they'll advance to the semifinals, where possible opponents include the OHL's Sudbury Wolves and teams from Sweden, Finland, Denmark and Latvia.

Live video will not be available for the games, but the Black Hawks' Twitter and Facebook and the USHL's Twitter and Facebook have all done a phenomenal job covering the proceedings to this point. Additionally, the team has set up a blog to document their trip while the league is frequently posting interviews to YouTube.

Before heading over to Omsk, Waterloo played a couple tune-ups in Moscow, defeating CSKA 5-2 on Wednesday but losing to HC MVD 4-2 on Thursday. Details of McAdam's performance in the second game are not known, although three of MVD's goals came on the power play and the fourth was an empty-netter. Against CSKA, and with the grandson of Soviet legend Vladislav Tretiak tending the opposite goal, he played the first half of the game and surrendered one tally, on a 3-on-2 rush. His most notable moment, though, was one he prevented in denying Kirill Kovalevski's second-period penalty shot attempt (shown above and also captured in video form here, at the 38 second mark).

UPDATE 8/18 9:20 P.M.: In the MVD game, McAdam played the second half, entering with the game tied 2-2. He gave up one goal, while the Hawks were on the PK, and as mentioned, the fourth was an empty-netter.

Following the World Cup, McAdam will also participate in the September 29th CCM/USA Hockey Prospects Game ahead of the coming USHL season.
Posted by Kyle Rossi at 12:08 AM