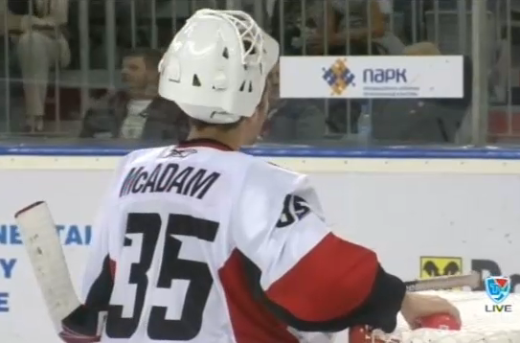 At last year's inaugural Junior Club World Cup, the United States entry was an EJHL all-star team. They did well, but were unable to escape the group stage of the tournament.

2013 goalie commit Eamon McAdam and his Waterloo Black Hawks teammates have now cleared that bar thanks to their ouster of host team Omskie Yastreby by a deceptive 7-3 score in a win-or-go-home game for both teams. The Hawks advance to the medal round, where they'll face Sweden junior champ Linköpings HC Saturday morning at 2:00 a.m. in a semifinal match. Linköpings plowed through their Group B schedule unbeaten, so the task ahead is indeed formidable. Waterloo, meanwhile, went 3-1-0 in Group A, losing out on first place only by tiebreaker.

The other semifinal will feature the OHL's Sudbury Wolves and Belarus' Dinamo-Shinnik. On Sunday, the losers of the two games meet for bronze, while the winners decide gold and silver. Either possible Sunday opponent would be appealing, but it would certainly be hard to beat seeing a major junior league vs. major NCAA feeder league battle for the Cup.

McAdam was an integral part of toppling a team that had won their last two games by a combined 13-1 score and on their home ice in front of 8,000 somewhat-biased fans. After a first period that could best be described as "comfortable," and that ended with a 1-0 Waterloo lead off the stick of Kyle Schmidt, McAdam provided what could be considered a turning point moment early in the second. On a 2-on-1 for the Russians, McAdam read the play, cut down the shooter and sucked the puck into his logo with a calmness that belied the urgency of the situation. Soon after, Ryan Papa would bury on the power play off a great feed from Ohio State commit Zach Stepan to give Waterloo a 2-0 lead four minutes into the period.

Omskie Yastreby would pull one back by solving McAdam with a Dmitry Kuzmenko wrister from up high midway through the second after the Perkasie, PA native made a couple initial saves that weren't cleared. But that remained the only blemish on his record (other than a first period turnover that nearly ended with a goal) well into the third period, after Stepan and Justin Kloos ballooned the Waterloo lead to 4-1 after 40 minutes. In addition to being his team's best penalty killer (as the cliche goes) on occasion and adding some key even-strength saves, he also forced an early third period penalty shot by Ivan Fishchenko wide.

As it turned out, the Black Hawks needed every bit of that big lead when things became unraveled in the last seven minutes of the game. McAdam was beaten twice - on a power play rebound and on a blast from left point through a well-timed screen - within a minute, and the outcome of a once-safe game was in doubt at 4-3. A vital Waterloo penalty kill immediately after the pair of tallies brought momentum back to the correct bench, and an empty-netter followed by a late penalty shot and another garbage-time goal salted away the result.

Here's what McAdam had to say following his 27 saves on 30 shots:

The win was his first tournament action since a 27-save shutout of the Czech Republic's HC Energie to open the group stage on Sunday. A strong Energie team controlled things early, thanks largely to some Black Hawk penalty trouble and an extended 5-on-3. McAdam, however, answered the bell and kept the scoreboard blank. Waterloo then broke through in the middle period to give the netminder a margin for error that he wouldn't need.


The Hawks battled through to eventually take the lead seconds after the fifth Energie power play ended. At 12:35 of the second period, Vince Hinostroza eluded defenders through the right wing circle and to the side of the net. Dropping the puck back to Alec McCrea, the defenseman’s shot along the ice found the back of the cage. Fifty-eight seconds later, Taylor Cammarata made it 2-0, rifling a shot under the crossbar, which was in and out in a split second.

In the third period, the Hawks went to the power play for the first time and cashed in right away. Ian McCoshen sent home a bullet from the deep slot 49 seconds after intermission. Waterloo found the target twice more during five-on-three power plays. At 4:16, Ryan Papa’s chance from the right circle went off goalie Vladislav Habal and in. Then at 11:31 Cammarata lifted the puck to the top corner.

The story was a little bit different the next day when the Black Hawks fell to Dinamo-Shinnik, the eventual Group A winner, by a 3-1 score. Despite McAdam's performance against Energie, Cal Petersen got the start in net and was under siege for most of the first period, conceding twice on 15 shots. However the Hawks, as they often do, battled back. Kloos buried a turnover to chop the deficit in half midway through the second. Seventeen seconds into the final frame, Waterloo thought they had tied things on the power play when Cammarata won a battle in front to knock it in, but the goal was ruled to have come by a kick and was waved off. Shinnik added insurance shortly after that controversy to drop the Black Hawks to 1-1 in Group A.

Here are highlights of the first two games, including two of McAdam's saves from his shutout:

Petersen also played in Waterloo's third group game of the four, a crucial tilt against Norway's national junior team. Despite the Black Hawks' dominance for much of the affair, they found themselves down 3-1 midway through the second before storming back with four unanswered (including three on the power play to go with an empty-netter) to survive with a 5-3 win.
Posted by Kyle Rossi at 3:37 PM