While Penn State are excitedly returning to campus en masse this weekend, sophomore defender Cara Mendelson and sophomore forward Katie Murphy had a little bit more waiting for them in Happy Valley than most: a spot on Josh Brandwene's inaugural NCAA team.

The news, which was first shared by Murphy and Mendelson's former Lady Icers teammate Lisa Frank, has been confirmed by their addition to Penn State's roster. Mendelson will wear number 3, up one from her number two of last season, while Murphy switches from 5 to 25.

They join forwards Tess Weaver, Taylor Gross, Jess Desorcie and Kate Christoffersen, as well as defenders Madison Smiddy and Lindsay Reihl as NCAA players who also played for the ACHA Division 1 Lady Icers last season. The road for Murphy and Mendelson to get to this point was a little tougher than the others though - they were not named to the initial NCAA roster back in May and instead were placed on sort of a wait list. The pair were given the team workouts and trained all summer as if joining the team, effort which has now paid off with a historic status.

As freshmen on the Lady Icers in 2011-2012, Mendelson and Murphy were both key components of the final ACHA-era team, which won the ECWHL regular season championship.

Murphy already has a DI point in a sense, as her assist of Carly Szyszko against Sacred Heart on January 13th helped give PSU a short-lived 2-1 lead over the Pioneers. She is a native of Novi, MI and a product of the legendary Honeybaked program that also helped develop teammates Smiddy, Jordin Pardoski and Birdie Shaw. Murphy, Smiddy and Pardoski all played for Honeybaked's 19U team in 2010-2011, coached by Pardoski's father Ryan (a former Michigan player and New Jersey Devils draft pick) and managed by Pardoski's mother Julie. That's quite a pipeline.

Mendelson, who joins Reihl and Smiddy as the only members of the Nittany Lions' defense with college experience, comes from a different pipeline - to the Pittsburgh area, joining Weaver, Steph Walkom, Darby Kern and Jill Holdcroft (who is from Centre County, of course, but played for the Pittsburgh Penguins Elite in addition to State College Area High School) in that regard. The right-handed shot will provide steadiness on the back end and will fit in well with what looks to be a very diverse defense group. Perhaps most importantly, I'll get to keep using this photo, of (left to right) Weaver, Brandwene and Mendelson: 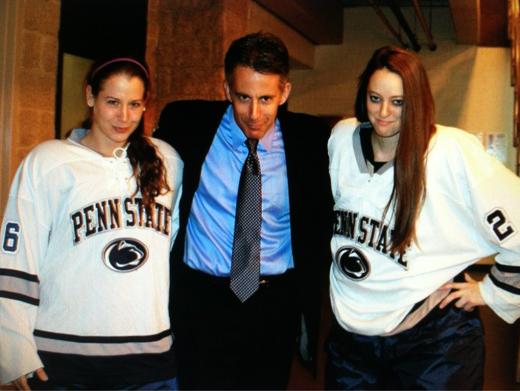 The Nittany Lions, now numbering 27 strong, open the season October 6th and 7th at Vermont. Their home debut will be October 13th and 14th vs. CHA opponent Syracuse.
Posted by Kyle Rossi at 9:41 PM