The Whitewashing of PSU's Club History

A few days ago, I stumbled on a fact sheet produced by Penn State athletic communications (PDF), which I assume will be part of the media kit for this season's men's hockey team. It's well done, with one glaring exception.


Yep, that's the entire program history of Penn State men's hockey. I'm not sure what's been played at PSU continuously since 1971, but apparently it wasn't men's hockey. The same issue exists for the women's team version (PDF):

At least that one has the word "varsity" tossed in as a qualification. I guess.

Penn State hockey is not new. It's been around for a while - the men, as stated, since 1971, the women since 1996. It just so happens that those programs have applied for and received NCAA status, coinciding with increased recognition by the university and the ability to award scholarships.

I feel like I'm well supported on that point, given the high degree of continuity across the two "eras." Guy Gadowsky and his staff coached in the ACHA (although you'd never know it from Gadowsky's bio on GoPSUSports.com), and 15 players - over half of the roster - from 2011-2012 will play NCAA hockey in 2012-2013. For the women, Josh Brandwene and his staff also coached in the ACHA and will bring eight returning players into the NCAA era. If the Icers and Lady Icers were separate programs, where did they go? If the NCAA programs were conceived out of thin air, why didn't the coaches just spend last year recruiting an entirely new roster instead of "wasting their time" with club hockey (oh right, they apparently didn't)?

"Transition" is defined as...


...movement, passage, or change from one position, state, stage, subject, concept, etc., to another.

Without an initial state of some kind, a transition is not possible, as things don't transition from non-existence in common usage. So when an official university release says something like...


Brandwene will lead the Nittany Lions' transition into NCAA Division I competition, which starts in the 2012-13 season

...how is that supposed to be taken, other than to say that "we have a program which is not NCAA Division I, and that program will move into NCAA Division I for the 2012-13 season?" Why would the university have put together something called the "Ice Hockey Transition Team," which included Hockey Czar Joe Battista? At last update, the Transition Team declared that "transitional issues continue to be a focus as the Men's/Women's club program transitions to varsity in 2012-13" (emphasis added). There are numerous other examples of the use of the word out there, as well as the similar "elevate," but I'll spare you and move on.


Last week, I posted about the athletic department's deliberate attempt to squash the use of the names "Icers" and "Lady Icers." I'm trying to be careful to not duplicate that post, but one thing is worth repeating:


I think it's absolutely vital to remember that none of this - not Pegula, not NCAA status, none of it - ever happens without the Icers. That's not vague sentimentality, that's fact. Pegula didn't just wake up one day in 2005 and say "hey, I went to Penn State, I like hockey, I should write them a large check to start a hockey program." He was familiar with the Icers thanks to his son attending camp in the late 1980s and early 1990s (I have no idea how many non-varsity hockey schools even had camps then, but it couldn't have been very many, which sort of gets at my point). He didn't approach former athletic director Tim Curley or some other university official in charge of large gifts, he approached Battista, then "just" the Icers coach ("just" in quotes for the obvious reason that he was much more important than the title).

Terry Pegula made his generous donation because he observed well-run, highly-successful hockey programs that were not varsity and did not have NCAA status, and wanted them to have an arena and the ability to offer scholarships so that they could become varsity NCAA programs. It all seems simple enough, but it still flies over the heads of many.

My demands? I don't feel that they're at all unreasonable.

For something like the fact sheets that started this post, I would like to see an acknowledgement of the teams that are much more responsible for our current reality than a varsity team that played 29 games in isolation in the 1940s. I would re-write the men's program history subsection like this:

Yeah, you might have to shrink the font sizes a little. So what? That's a much more complete and accurate representation of the program history, and I only added three lines.

For a more in-depth project, like a media guide, I want to see records spanning all 50 varsity and non-varsity seasons included with a thoroughness equal to the standard established by programs across NCAA Division I. In RIT's 2011-2012 men's media guide (PDF), the history section is 27 pages long. It includes, along with other items:

There's a very specific reason I chose to use RIT as an example. The Tigers have a rich history outside of NCAA Division I, winning a pair of national championships in lower divisions. Rather than brush that history aside and pretend that their program started in 2005 (when they elevated to DI), they do this: 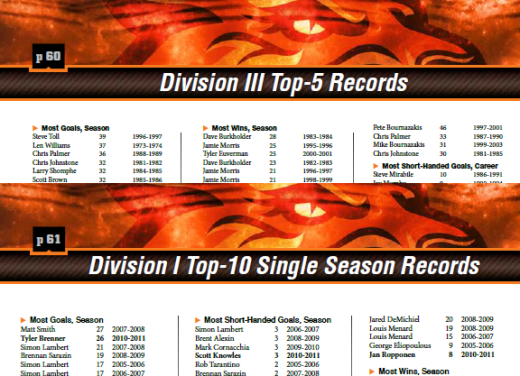 Some records, of course, can be integrated. Season-by-season leaders, for example, can be understood as having taken place in NCAA DI competition starting in 2005-2006 for RIT, or 2012-2013 for Penn State. The transitions can even be labeled if confusion is a concern:

Notre Dame is one example (PDF) of a program that approaches it that way (they were a club program in 1983-1984 and in other periods prior to 1968). The more important points, though, are that they combine their non-varsity with their varsity records and have the good sense to document all of their program's history, even the segments that developed without the athletic department's help. Another very pertinent example is the media guide for the Lindenwood women, now a conference rival of Penn State. Despite their recent elevation to NCAA DI, they give a full treatment to their ACHA years, including an all-time schedule and results, statistical record holders, and synopses of LU's four ACHA national championships.

Many records, generally the ones that involve comparisons across different levels, shouldn't be integrated, and that's why RIT lists Division III and Division I separately as appropriate. I see no reason why Penn State can't treat the club era as its "Division III." Unorthodox? Perhaps. But a club program - and not just any club program, the most successful club program of all time - transitioning to NCAA Division I isn't really orthodox either.

Although I can't imagine that too much survives beyond the all-time schedule and results, and maybe participation lists, the 1940-1947 varsity team should have its own subsection as well, so that its records don't quickly get overwhelmed by those of the new varsity era. I have no clue how many career goals John Dufford scored, but I do know that if that number is available, I don't want it bumped from the top five after one or two NCAA seasons.

Understandably, any efforts might be limited by the amount of available information. RIT, as you may have noticed above, generally has less data on their Division III teams. Any endeavor making an honest effort at collecting and communicating whatever exists will be appreciated in this corner. And hey, I've already done a lot of the work in the form of TYT's all-time men's schedule and results page (in the event that someone in a position to incorporate it into official recordkeeping is reading this, I'm offering my work product to you without limitation and myself without limitation to any questions about it).

Beyond fact sheets and media guides though, my final and most important demand is also my simplest: respect. Whether it's ignoring the club era in all communications unless mentioning it is absolutely necessary or the issue surrounding use of the Icers name, it seems as if there's a pattern of disrespect for Penn State hockey's history, originating mostly with people who had no reason to care about the program before September 17, 2010.* That's not something without ramifications either - consider the responses (via Twitter) of three recent Icers alumni, and again, now Penn State lettermen, upon seeing the fact sheet.

* I want to make it perfectly clear that this isn't a universal or even a majority attitude among those involved with the programs, especially when considering figures like Battista, Brandwene, Billy Downey and Mo Stroemel and their backgrounds, as well as statements from others like Pegula and Gadowsky.


Seems like we existed as much as Penn State vs. Ohio State for the six years those games were erased.


In recent weeks, athletic department employees have developed the slogan "One Team" (and a corresponding Twitter hashtag #OneTeam) to encourage unity across all PSU sports. I suppose ultimately, all I'm seeking is for hockey representatives participating in that movement to embrace their own program's legacy with the same zeal that they have for, say, promoting women's soccer. I don't think that's a huge ask, and those willing to make the leap will be rewarded with the knowledge that former Icers and Lady Icers are just as worthy of having their accomplishments remembered as any other student-athlete who has worn Penn State blue and white.
Posted by Kyle Rossi at 11:34 AM

Email ThisBlogThis!Share to TwitterShare to FacebookShare to Pinterest
Labels: History