One of my favorite chapters of Penn State hockey history is largely an untold one - the school's near-constant attempts to construct an ice rink in the 1920s, all of which started with a lot of promise, but ultimately failed (I reviewed the first of these back in April).

Perhaps the most spectacular of these failures was the attempt to build a winter sports park at Thompson Spring, an endeavor that chewed up the class gift funds of no fewer than five PSU senior classes, from 1927 through 1931.

Where is Thompson Spring? I wondered that for quite a while myself, until finding a document from Penn State's Office of Physical Plant (PDF) with the answer: 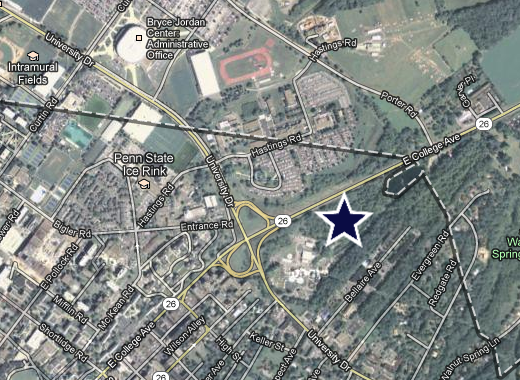 So there you go. The white cluster of buildings just down and left from the star is PSU's waste water treatment facility. The nearby body of water on the opposite side and surrounded by dotted line (the borough of State College's boundary, apparently they didn't want to be responsible for it) is the Duck Pond, another early - perhaps the earliest, in fact - hub of skating activity in Penn State's history.

Our story begins with the Class of 1927, and their plan to establish an endowment for their class gift through New York Life to pay for a to-be-determined (as of February 22, 1927 when the following Daily Collegian article was published) item. In addition to the winter sports park, a scholarship fund and a building addition were also considered. 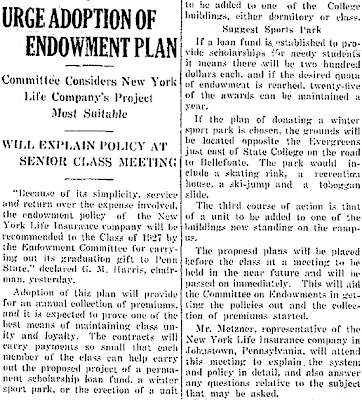 By September 8th of that year, things were moving along quite well. The winter sports park had been selected as the 1927 gift, and PSU (then PSC, I guess) advanced some money towards the project, on the back of repayment pledges from the classes of 1928, 1929 and 1930. The ice rink was the first phase of the project. Specifically, the plan was for two artificial pools, using dammed-off water routed from Thompson Spring. Bids were accepted for construction of the dam at that time as well. 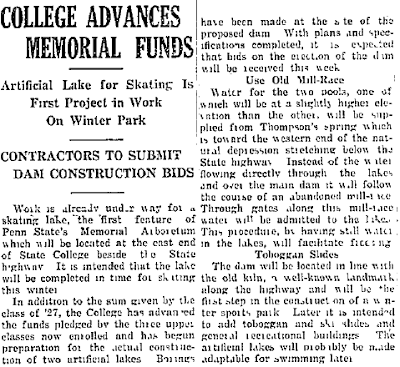 Four months later, a contractor had been selected, and work was underway, with the optimistic forecast of a February, 1928 completion date for the rink portion of the project. The following article also provides some clarity as to how the whole thing was to be laid out. 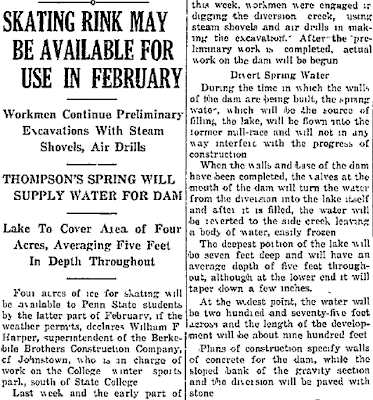 On Valentine's Day 1928, reports continued to be optimistic. Progress had been "rapid of late" due to favorable weather conditions and included completion of "most of the excavation for the dam...and concrete is being poured." Although the prediction of skating that month wasn't going to come true, "soon" was the word used to describe when the lakes would be ready. Two weeks later though, "soon" was "April." The March 2, 1928 Collegian quotes project foreman William F. Harper as saying that "difficulties were encountered when the bed rock was found to be deeper than at first estimated and water flowed into the cut, making it necessary to pump it out."

That issue was eventually resolved, as on September 13, 1928 it was reported that the dam was complete. Additionally, the class of 1931 had by then attached its gift to the project, "which this winter will no doubt be used for skating." What really strikes me at this point is that the other aspects to the winter sports park seem to have largely become afterthoughts. In this particular article, it was mentioned that "a toboggan slide and other features attractive to winter sport lovers" are "planned." Regardless, the next month, Student Council president Harry Pfeifer still felt a need to appoint a three-student committee to develop rules and regulations for the "new Winter Sports Park," which as best as can be ascertained at this point, is just a dam and an artificial lake. Details, I suppose.

Coverage becomes sparse after the appointment of that committee, and it might not be a stretch to assume that occasional skating took place (although, as always, at the mercy of the weather without any sort of artificial cooling system). The idea that there might have been some success is bolstered by the last major discussion of the winter sports park, on December 20, 1929. 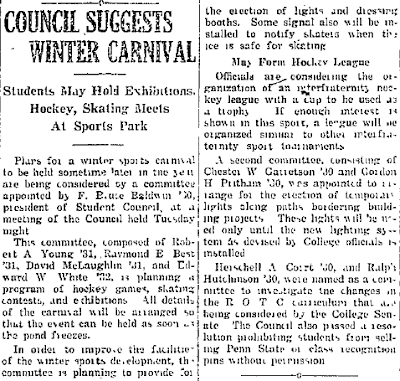 So what happened? With resigned frustration, I have to admit that I can't tell you, because the Collegian archives go silent on the issue after 1930. In fact, searches for "sports park," "skating rink," "ice rink" and "Thompson (or Thompson's) Spring" came up completely empty between September 29, 1930 (where it's mentioned in passing due to the way it was funded) and November 5, 1937, when the buildup to the informal hockey team that would lead to the 1940-1947 varsity team was underway. Our only real clue comes from a December 11, 1936 article, which mentions a meeting at Rec Hall that day to discuss transportation to Whipple's Dam - 12 miles away from campus - for an afternoon of skating. It seems clear that the winter sports park project was completely abandoned by then, and later articles discussing the formation of the hockey team bemoan the lack of an adequate place to skate nearby.

One thing we do know: it emphatically ended an interesting decade in Penn State hockey history, albeit one without actual hockey. There, of course, were numerous temporary surfaces attempted with little success to give the 1940s varsity team a place to practice and play, but the next try at something more permanent, the outdoor rink that, after enclosed, would eventually become the first home of the Icers, worked out pretty well.
Posted by Kyle Rossi at 8:22 AM