Tougher Than The Rest

Above is an embedded video (direct link here) of the August 10th edition of sports feature show The Home Stretch, which is aired on Naperville (Illinois) Community Television. A story on freshman women's goalie Brooke Meyer leads off this episode.

Because I categorically distrust the staying power of things I didn't put on the internet myself, I've also transcribed Meyer's segment.

The Home Stretch host Marc Dahlquist: When we first met Brooke Meyer more than two years ago, the then-sophomore at Neuqua Valley High School was already starting to make a name for herself on the softball field. Before grabbing her diploma this spring, the four-year letterwinner in softball was named the outstanding female athlete of the year for the Wildcats. But for Brooke, her future isn't on the diamond.

When Brooke Meyer attends Penn State in the fall, she'll compete in the inaugural Nittany Lions women's ice hockey season and will live out a lifelong dream of playing Division I hockey. The road to State College, though, started long before the puck dropped on her high school career.

Meyer: [At a] very early age, I played a lot of sports. I played soccer, hockey, baseball…t-ball, all the little things, you know, your parents get you into every sport and see what you want to do.

Patty Meyer (mother): For Brooke, it was always ‘when am I going to be old enough to play sports,’ and everything was five years old. T-ball didn’t start ‘til five years old, everything with the park district, you had to be five years old. She quickly learned that hockey, there were no rules. There were boys younger than five years old skating. So as soon as she could, we enrolled her in Rocky Hockey [Editor's Note: A pre-hockey program in the Chicago area], it just seemed like a natural transition for as much time as we spent at the rink. It’s like...it was her time.

Dahlquist: Brooke made the most of every opportunity she had as a young athlete, showing coaches at an early age that she was ready to rise to the challenge.

Meyer: There was a time when I was in mighty mites, which is probably like six years old, and it was the championship game, and everyone rotates goalies, and the one kid that was in didn’t want to play goalie, because he didn’t want to lose the game. I was like ‘I’ll do it,’ and ever since then, I’ve never left that crease.

Dahlquist: For more than 11 years, she has called the crease home, doing her best to stop wristers, one-timers, and slapshots during hundreds of club and high school games. And in her sophomore season at Neuqua Valley High School, she was named the starting goalie for the boys’ varsity hockey team, playing alongside her older brother Zach, whose footsteps she’d been following for years. Meyer: I just wanted to always be better than him, which is kind of hard, because he’s two years older than me, and he was always stronger than me and bigger than me. You know, he could just kind of do whatever he wanted, and I had to just go with the flow.

Zach Meyer (brother who is now in the Marine Corps): I never let her win, she’d tell you that. I always had the upper hand on her, and even now, she’ll try to win, but I’ll still put her in her place sometimes. Her whole life, she’d been pushed to be better, and she loved the challenge, she embraced it, and ultimately became the athlete she is today.

Patrick Meyer (father): My son’s a big boy, and I’ve seen her wrestle and take his abuse you might say, but she never backed away. So being tough, no, I would actually suggest to you that most of the men’s teams she played on, the coach would tell you that she was one of the strongest players. Physically, not just mentally.

Dahlquist: Toughness was a must for Brooke. Unlike many of her future teammates, she played with the boys, and had to deal with her share of scrutiny from opposing players and fans. With the help of her team, coaches and family, she was able to brush off any negativity on, and off, the ice. But when she takes to the rink for Penn State next year, Brooke will just be one of the girls.

Meyer: The way the game’s played, the women’s style is a lot more faster paced, because they don’t have checking - but they still get physical. But women, I feel like they snipe more. They don’t have that hard shot, so they’re going to pick the corners, so you really gotta have your angles right.

Dahlquist: Brooke’s move to College Station [Editor's note: Ugh.] is part of a larger transition. Penn State will skate for the first time next winter as a Division I program in both women’s and men’s hockey. Thanks to the largest private donation in the school’s history of 102 million dollars, from alumnus Terry Pegula and his wife Kim, a state-of-the-art rink and facility is under construction that will bear their name and is scheduled to be completed in 2013. This is where Brooke and 17 other freshmen will join transfer students in laying the groundwork for a successful program for years to come.

PSU Head Coach Josh Brandwene: She is a very talented goaltender. One of the things that, in our process of watching her, that I’ve loved the most is that she competes for every puck. As I said earlier, she just has that character of all these kids who are coming on board for us. So we’re looking forward to the whole process of really building a foundation here, and we’re not very far away from getting started, so it’s going to be exciting for everyone.

Meyer: I just want to make a name for Penn State, in that we are someone to compete with, and that we’re going to build a program in men’s and women’s ice hockey [that] is something that’s going to become popular there, especially with the new rink in the next year. 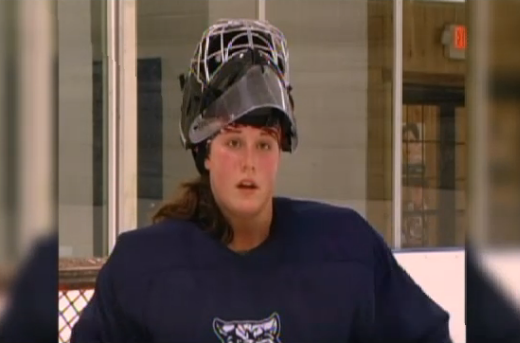 Dahlquist: When the NCAA levied sanctions on the university this summer stemming from the highly-publicized athletic scandal, the association fined Penn State 60 million dollars, an amount some thought would negatively affect the entire athletic department, including the two newest teams.

Brandwene: It’s certainly a big challenge for the university, it’s an enormous challenge for our football program, and they’re in great hands with Coach O’Brien, who I support 110 percent, he’s terrific. But the university has made it clear that these sanctions will not have any impact on any of the other varsity sports. We’ve got a tremendous athletic program here, and we all support one another, we’re one team here at Penn State.

Dahlquist: The support between Brooke and her teammates will be put to the test when they open the season in October. And when she puts on that Penn State jersey for the first time, Brooke can check one more goal off her to-do list.

Meyer: I don’t know, this is so surreal for me, because that dream actually came true. I mean, you talk about it for the past ten years. I kept going with it, no matter what obstacles were put in my way, but I just want to play DI college.

Dahlquist: While the new program and university still have many obstacles to overcome, like so many times in the past, Brooke is ready for the challenge.
Posted by Kyle Rossi at 2:04 AM