This was the first post I wrote for TYT, back in early October, before I had published anything or even knew for sure that I was going to go through with this insanity. I think it's fair to say that I never get hooked on Penn State hockey if not for Tim, and I hope that my work has done justice to his legacy of passion for the game and the team. 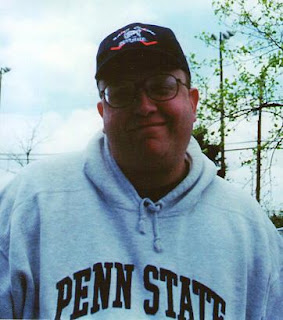 It’s March, and with the new month comes the ACHA National Championships, the most exciting time of year for any Icers fan. As the drive to the Murdoch Cup gets underway each season, my thoughts always go back to my best friend, Tim Hanselman, the man with whom I attended every championship tournament in the eastern time zone from 1999 through 2004, witnessing two of the Icers' four national championships during that era in the process.

It was thanks to Tim that I got my true indoctrination into the Penn State hockey cult: the 1999 ACHA National Tournament, coincidentally held in Newark, DE, the site of this year's tournament. While I had attended plenty of games already at that point, there’s nothing quite like living and breathing the experience for the better part of a week in a place far (but not that far) from home and with everything on the line. ﻿ 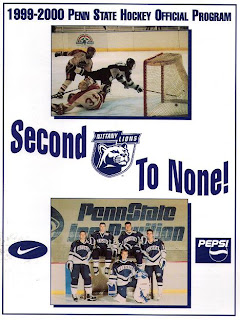 Some of the memories are still extremely fresh – the Don Coyne Cheez-It incident described in a previous post, for one. My cowbell being stolen by one of Michigan-Dearborn’s players (the douche factor in that program is exceeded only by their current irrelevance), for another. And of course how, in the Pool A game that determined one championship game participant, Iowa State scored the winning goal against Ohio with about a minute to go on a play that was blatantly offside. The Cyclones went on to defeat the Icers 6-4 in the championship game, then vacated their title when it was discovered that star forward Darcy Anderson had played professionally prior to his ACHA stint. Thanks to HockeyDB.com for cracking that case (the slogan on the program cover to the left was a stroke of genius from then-HMA member and current Icers SID Rodney Martin).

The good times continued over the next five years – the Miracle in Minot run in 2000, followed by three more championships earned in stunningly dominant fashion. Our trip to the 2002 tournament in Towson, MD was punctuated by Tim somehow getting us into the team’s celebratory dinner afterwards. The highs of that night and one a year later where I had to hold Tim back from beating down a mouthy Ohio fan (we responded by stealing some of their signage instead, as per our MO) were balanced by the low of the 2004 championship game where, because Tim worked on Sundays, I had to listen to the game over his computer and instant message him the details of the revenge win by the Bobcats, which ended the Icers’ title string at four. Through it all, my now-wife Jennifer (Tim’s sister) and I worked in HMA, received our Penn State degrees, and joined Tim at Icers home games whenever we were able, first in seats in the front of Section D, later standing behind the net on the scoreboard side of the Ice Pavilion.

I think he changed locations because he was always a goalie guy at heart and wanted to see the game from their perspective. After all, his two favorite Icers moments were the 1990 and 2000 national championships, both of the upset variety and both driven by fantastic goalie play, first from John Gray, then Mark Scally.

Nothing I can put in this post can really do Tim's obsession with the Icers justice. I've already included some of his stuff in my Payday Memorabilia feature, with more to follow. His collection of PSU and ACHA pucks has to be without peer, and to this day, I still buy two when I see a new one. I remember taking a disgustingly awful, freeway-less and Don McLean-infused drive to Johnstown to pick up some game-worn Scally Chiefs jerseys (another of his favorite things to collect) on which he had spent a week's income, then doing it again to see Curtiss Patrick and Bill Downey play there. He even - and as anyone who's ever stayed in that dump knows, this might be the biggest commitment of all - got a room at the Happy Valley Motor Inn every Icers home weekend to avoid the 90-minute trip home after midnight, only to have to come back early the following afternoon.
Sometime around 6:00 on the evening of January 22, 2005, Tim texted me: “icers win 5-4.” The text itself wasn’t at all out of the ordinary – in fact, Tim had been sending me score updates of the unexpectedly close game against Towson to all afternoon long. The only thing that made this text unusual is that it would become his last-ever communication with me. Just over 12 hours later, he was dead, having been stuck by a car on I-80 after he had pulled over to assist an overturned vehicle. I'll never forget how we received the news that night - after returning home from Dairy Queen, where we discussed getting Tim a Pittsburgh Penguins jersey with "Scally 41" on the back for his upcoming birthday.


At his memorial service, here's how I began his eulogy:


You can't see Tim in here, but I just want everyone to know that he's not wearing a suit. He's wearing a Penn State hockey jersey and shorts. All too often, when we deliver our beloved to their final resting place, we give them their best suit without really considering whether that's what they would want to be wearing, whether we're doing a good job of representing what that person's all about. I don't need to tell any of you that Tim is dressed appropriately.

Just over a month and a half later, I stared intently at Tim’s old computer screen at some crude version of an ESPN.com-style Gametracker that the ACHA’s internet people had thrown together and listening to a webcast of Illinois defeating the Icers 4-3 in the championship game. It wasn’t right. If Tim’s last nationals memory was my instant message telling him the game was over and we had lost, surely the first nationals after his death would end with Penn State reclaiming the Murdoch Cup.

For what it’s worth, the Icers have not won the last game of the season since Tim’s death. I don’t necessarily believe some cosmic force is at play. In fact, it’s probably as simple as the ACHA’s being exponentially deeper than 10 years ago, including the rise of programs like Lindenwood, which are operated more or less as varsity programs playing club hockey. And it’s not like the succeeding years haven’t been tremendously fruitful at Penn State – three ACHA championship game appearances, ESCHL regular season and playoff titles in the first three years of the conference, ACHA quarterfinals every single year, tremendous players and teams throughout. But for me, one more national championship before the ACHA chapter of Penn State hockey ends would finally bring things full circle.

Tim, for his part, is exactly where he’s been for the last six years: at a small cemetery on W. Sassafras St. in Selinsgrove, PA. True to my eulogy, he was cremated in a Mark Scally jersey and shorts with “Penn State Hockey” embroidered on the leg (the rest of his massive jersey collection was donated to the booster club), and his ashes are buried under a marker depicting a pair of crossed goalie sticks beneath “P.S.U.” On a recent visit, I shared the exciting news of Penn State’s starting an NCAA program. But the smile on my face quickly vanished when I realized the conversation couldn’t go any further.