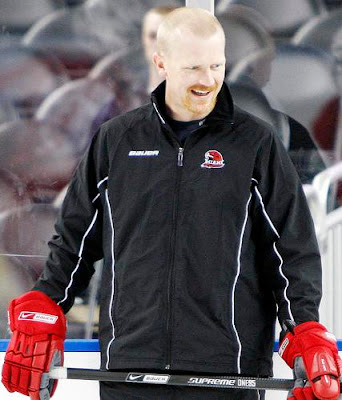 Right up front, there's absolutely nothing at all behind my selection of the current Miami assistant for this series. Not a single Brekke-PSU mention on the internet, I haven't heard one anywhere else and he's not necessarily considered one of the "candidate for every job that comes up" types like George Gwozdecky.

Well, almost nothing. There is the fact that he's a Miami assistant and the supplemental fact that the Enrico Blasi coaching tree has proven quite fruitful despite not having many rings to the trunk, as two former RedHawks assistants in particular are now making waves in head coaching jobs:
Then there's the matter of Miami's program itself, and its winning (duh) mentality. I once foolishly thought that the RedHawks would go back to being the Redskins once former Hobey Baker hat trick finalist Ryan Jones departed following 2007-2008. But the post-Jones era led to even better things, like a national championship. Hockey games are 59 minutes long, right?

Scratch that. Nevertheless, back to back Frozen Fours in 2009 and 2010 qualifies as uncharted territory for the RedHawks. There's also been more Hobey finalists, like Carter Camper and Andy Miele this year. And who can forget the way the program came together and made a Frozen Four trip last season following the death of student manager Brendan Burke - which is really just a natural extension of the "Brotherhood" culture that exists at MU?
Granted, Brekke doesn't have as much time in the program as either Blashill or Bergeron did, although he's in his third season there, which encapsulates most of the events I just mentioned in the previous paragraph. And he's already been promoted to associate head coach, a strong endorsement from Blasi and the administration there. Plus, he was interviewed by his alma mater for that Western Michigan opening that ultimately went to Blashill.

Prior to Miami, Brekke, a defensive specialist, spent nine years as a Cornell assistant, from 1999 through 2008. Working under head coach Mike Schafer, the Big Red enjoyed probably their greatest run of sustained success since the Ken Dryden era, making the 2003 Frozen Four in the middle of four NCAA tournament appearances and five ECAC regular season or playoff titles from 2001 until 2006. Defense and goaltending have always been hallmarks at Cornell, and these teams were no exception with guys like Doug Murray, Mark McRae, Ryan O'Byrne and Charlie Cook in the d-corps.

Schafer hired Brekke from the USHL's Chicago Freeze, where he spent two seasons as an assistant coach and director of player personnel. Before that? He was playing, both at WMU, where he served as captain as a senior, then during a brief pro career.

There's no doubt that Brekke is one of the up-and-coming coaches in college hockey, and if he doesn't end up at Penn State, he'll definitely be running someone's program at some point, following in the footsteps of former co-worker Bergeron, and the guy he replaced at Miami, Blashill. He has no head coaching experience, and that's generally considered a drawback, but then again, Colorado College head coach Scott Owens has an interesting take on that.


“Somebody with head coach experience is sometimes better the first month or two,” Owens said. “But some of these (assistants) have so much more upside. I do think it’s overrated. If you’re looking at someone for 5 to 10 years, you have to be careful you don’t get a yourself a person who minimizes what you could have been.”

Good point. But with all due deference to Coach Owens, in our somewhat unique situation, there's going to be a lot of uncharted territory no matter who gets the job. My preference would be to minimize the unknown, even while running the risk he mentions - besides, as we've seen, some head coaches are pretty good too.
Posted by Kyle Rossi at 8:50 AM