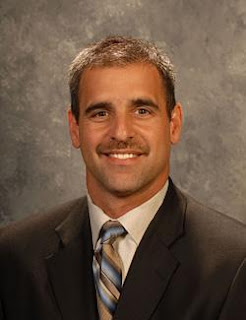 In a move that's flat-out bizarre on a few different levels (one of them being that I'm not about to talk about Danton Cole), Michigan State has announced now-former CCHA chief Tom Anastos as their new head coach, replacing the retired Rick Comley. What do you have to say about it, Sparty?

Tom Anastos, a Michigan State alumnus who has excelled in the sport of hockey as a player, coach, administrator, and visionary, has been appointed today (March 23) to the position of head coach of the Michigan State hockey program, according to an announcement made by Athletics Director Mark Hollis. Anastos, who has served as the commissioner of the Central Collegiate Hockey Association since 1998, becomes just the sixth Michigan State hockey coach in program history and the fourth in the modern era.
"I am extremely excited about returning to Michigan State to lead the Spartan Hockey program and once again be a part of the MSU Athletics Department family," said Anastos. "I have obviously maintained a relationship with MSU and been in close contact with the hockey program for the last 13 years in my role with the CCHA, but this opportunity is incredibly special.
"The expectations I have for our program will be to compete annually for conference and national championships. That was the expectation when I was here as a player and as an assistant coach, and I don't believe it should be any different in my role as head coach. In our locker room, we have quality young men who are good players, good students and good citizens, which are all hallmarks of this program. I am excited to get started, to hire a staff, and to get myself re-acclimated within the MSU community."
"Bringing Tom Anastos into the MSU Athletics Department to run our hockey program brings someone with energy and passion not only for the sport of hockey, but for our University and program as well," said Hollis. "He can attract high-caliber talent and develop those players into those who are attractive to the National Hockey League. He places a premium on education, and the drive and desire to compete for championships.

In case you've been...I don't know, somewhere where you didn't hear about Big Ten hockey (I'm not sure anywhere in North America qualifies), this timing is interesting to say the least. On Monday, news broke that Big Ten hockey is likely to be a reality. By Wednesday, the commissioner of the conference that stood to lose the most from that news was named head coach of a Big Ten program. Wait, what?


Another thing: as mentioned, Anastos has been in his role with the CCHA for 13 years. For the four prior to that, he was president of the NAHL. That's 17 years that he hasn't been behind a bench, in case you're an Ohio State grad and need me to put that together for you. Before he was an administrator, he played (1981-1985) and coached (as an assistant, 1990-1992) at Michigan State. In between, he was the head coach at Michigan-Dearborn (a school familiar to Icers fans) from 1987-1990 - by the way, I looked it up, and Anastos never coached against Penn State. The legendary PSU-Dearborn rivalry didn't get going until a few years after that.
From a Penn State standpoint, obviously, Michigan State is competition now. Anastos, barring some kind of unlikely major scandal, will be the coach in East Lansing when we play the Spartans for the first time, as he tries to rebuild a program that has fallen off the map in the last couple years, hastening Comley's departure.
Furthermore, Anastos is not George Gwozdecky, the former MSU assistant who has been kicked around as a candidate for both their job and ours (as mentioned, he's also not Cole, the assumed frontrunner pretty much since the job came open). I can't think that Anastos was even within 12 feet of our radar, so an opening at a pretty prestigious program being filled without interfering with our search is not a bad thing.
Posted by Kyle Rossi at 4:20 PM