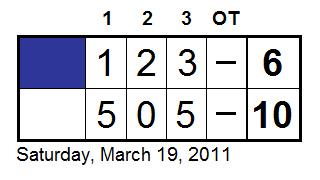 ACHA recap // Box score
In a game that had all the hard hitting, intensity and disciplined defense of your typical all-star game (including a combined zero penalties), the White squad of graduating Icers senior Tim O'Brien defeated the Blue 10-6 at Adrian College's Arrington Ice Arena Saturday night.

O'Brien skated with Ohio University archrivals Michael Schultz and Tyler Pilmore and showed decent chemistry with the two (I just threw up in my mouth). This paid off at the 7:50 mark of the third period, when O'Brien scored from just in front of the blue, courtesy of some great work from the pair of Bobcats to set it up (I just threw up in my mouth again). The goal made it 7-4 White, helping to put it away after Blue had narrowed a 5-1 White lead to 5-4 early in the period.

Pitt's Justin Thomas had a four-point night for White, while first star of the game Brock Heinauer (Duquesne) and Colin Hekle (Arizona State) each had two snipes. Robert Morris (IL)'s Gehrett Sargis had two goals and an assist to pace the Blue Man Group.

There was also a skills competition prior to the game. I didn't see it, so I'll lean on the ACHA for the event winners. Not a bad night for Heinauer - named best player in the game, won the hardest shot competition, came close in the shootout.