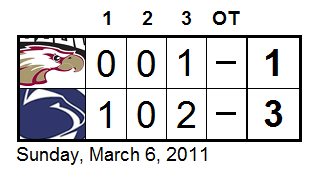 Collegian summary // Collegian recap
Onward State recap // VFTB highlights // Black Shoe Diaries recap
Team press release // Box score
For some teams, the season ends with jubilation, a happy team photo, and the handing out of a trophy. For most it ends quite differently.﻿
I couldn't help but think about the half-circle of the Icers season while I watched this game. Remember October 8th? It was the first appearance of Penn State hockey at home after the big donation announcement. A packed Ice Pavilion, including the Pegula family and Dr. Spanier witnessed an 11-0 dismantling of Drexel. High hopes and good feelings with an eye on the future was the order of the day.
On March 6th, the story was quite different, and a lot more depressing. I counted about 30 people in the bleachers at puck drop. I was apparently the only one who even noticed the team take the ice, based on the applause. On the Icers' second goal, by Dom Morrone, the PA announcer read from the wrong roster and gave credit for the goal to Robert Morris' No. 19, Dave Bauer. Nick Fina (No. 27) and Geno Malone (No. 23) got the assists. The whole progression sort of felt like This Is Spinal Tap - next up, opening for a puppet show.

My next thought went to the seniors. I watched Teddy Hume carefully throughout the warmup and as the game progressed and couldn't help but feel a little bad for him. I'm sure this season hasn't played out how he would've liked, but he should hold his head high. For all the struggles, he went out like a champ, against Rutgers and now Robert Morris. He's one of the best Penn State has ever seen. I just wish he could have gotten the shutout. But then again, maybe imperfection is fitting in a way.

Chris Pronchik was another guy who had a fantastic game. Yeah, there was the goal, a first-period shorthanded (how else?) tally from Marek Polidor (who else?) that held up as the only one of the game into the third period, but the Eagles had no answer for his speed all game long. Whenever PSU was threatening, there's a pretty good chance it was because No. 9 was beating a guy to the outside and drawing a penalty, coming hard on the backcheck to steal the puck and turn it around, or something else that involves speed and effort.

Nick Seravalli stepped in between Polidor and Chris Cerutti pretty effectively, and he's a guy that I hope to see with an increased role next season, as he's been great coming down the stretch. Tim O'Brien, the guy normally centering that line, didn't play. I'm not going to fully comment on that one without all the facts, but I sincerely hope that another all-time Icer great wasn't denied a final game in blue and white for something other than an undisclosed injury. The Bauer...err Morrone line (including Paul Daley and Mike Broccolo) was great too, but you don't need me to tell you that. The defensive effort was one of the best of the season, even with Brian Dolan, who had emerged as one of the unit's best, in warmups for this one as well.

The game ended rather quickly and with little fanfare. The Icers are the ACHA's 11th place team, which I guess is better than being 12th, but I'm still not sure how to handle the strange creature of the consolation game. I hope to not have to figure it out again next year. 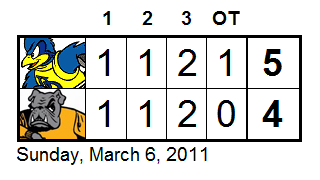 Box score // Delaware press release
Originally, I was going to do these in chronological order, like yesterday. This game changed that. Because while I've witnessed a lot of hockey games in my life few, if any, were better than this one. It qualified as a good game all along, but drank some tiger blood and became great in the last minute of regulation, when the Hens' Brandon Weiner scored twice with the goalie out on pretty identical-looking plays to tie up a game that had looked like it had slipped away from UD. I ran into Kyle Drury just outside the locker rooms during the (first) overtime intermission and got my second-ever exclusive with him:
Me: How about that one?
Him: Holy shit!
Yeah, pretty much. And the two overtime periods somehow managed to one-up that by offering the most intense, heart-stopping hockey of the tournament so far. Heart-stopping? Yes. There were three power plays in the overtimes (two for UD) and myriad chances in each. SJ Broadt stopped two breakaways - I was convinced it was over each time, but he came up clutch. My dog in the hunt was on its way back to State College, but I was still on edge until a parked-in-front Kevin Miller put it home with just under eight minutes left in the second overtime.
Think I'm exaggerating how great of a game this was? Check out my Twitter feed after getting back to the hotel.

Miller: What a win for @UDHockey after double overtime #notbuiltforthis

Josh Weiner: Speechless. Most incredible sporting Event I've been apart of. Down two with a min left and tie it up. Win in 2OT.

Dave Lombardi: Just finished the most exciting game of my life, @UDHockey 5-4 win in 2OT. Can't believe I was on ice for GWG, was taking 15 second shifts!

Josh Weiner again: @kcmiller12 @ColonelBrundon @2dogs1SJ were the heroes but what an effort by the whole squad. Let's get it tuesday. #final4
Andre Menard: Most exciting game I've ever been a part of @UDHockey here we go #final4
Ryan McDonald: The feeling I am experiencing right now is the reason I play hockey. Most exciting game of my life!
Nick Lepore: Too tired to realize what just happened. Unreal game though just a real barn burner out there.

Good luck to Delaware on Tuesday. Had they lost, the final four would've been three schools I never would've heard of without the ACHA and Ohio. That's reason enough to get their back. 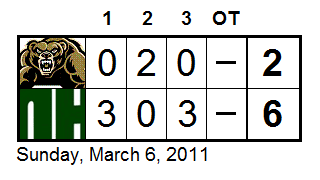 Ohio press release // Box score
The Bobcats have to be one of the most schizophrenic teams out there - the score graphic above provides a nice little illustration of how this one went. When they're on, they're absolutely capable of justifying my championship prediction. They're sturdy defensively behind the lead pair of Steve Osacky and Zack Barbis, have a great goalie in Blake MacNicol, and a ton of forwards with clearly-defined roles, including some big-time scorers. Despite all of this, after they came out flying in the first period, Oakland controlled the second. It could have been even worse than 3-2 after two, as the Grizzlies hit a post flush on a power play and had a goal questionably waved off in addition to the two they scored that period. Here's the Ohio recap to finish it out:

With Oakland closing in, it was up in the air about how the third period would be played out.

Everyone in Fred Rust arena quickly knew the answer.

Thirty-three seconds from the opening puck drop in the third, Pilmore put the ‘Cats up 4-2 on a set-up from Zack Barbis.

The momentum was shifting Ohio’s way.

Five minutes later, Defenseman Jake Holzemer lit up a shot that beat Pikunas to increase the lead to 5-2. Schultz collected his second assist of the day and third of the tournament while Holzemer has now scored in both tournament duels.

Thirty-seven seconds after Holzemer lit the lamp, Agnew poured salt on the Grizzlies’ wounds with a hat trick! Ben Gilles earned the assist. 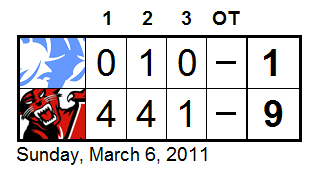 Davenport press release // Box score
Does anyone want to think about what happens if Penn State ends up in this game? Me neither. I obviously have a lot of respect for the ESCHL champs, which is what makes this result so stunning. There's a very large, very obvious and very disturbing question in play here as well - have the Icers and their presumed equals fallen this far behind the top of the ACHA? That's probably not something that can be answered right now, or maybe even before we're out of the ACHA's top level, but this game was not a good indicator on that front. Davenport recap:

The Panthers started off quickly as DU scored there first three shots on goal as McKenzie, Bobby Collar (Brighton, Mich.), and Sean McWhorter (Lansing, Mich.) put the #2 seed up 3-0 within five minutes of the game. McKenzie scored from below the goal line off a URI defender to give the Panthers the early lead. Bobby Collar scored another highlight reel goal as DU senior shelved a pass from Kyle McDowell (Toronto, Ontario). McWhorter put DU up by three as he unleashed a wrist shot from the slot on the powerplay.

Later in the period, Collar took advantage of a URI miscue as the forward deked the goaltender for the shorthanded tally.

The second period was much of the same as DU continued the onslaught. McKenzie completed the hattrick as the Panthers also received goals from Brandon Davis (Hartland, Mich.) and Morang. Despite giving up a powerplay goal, the Panthers led after 40 minutes of play, 8-1. 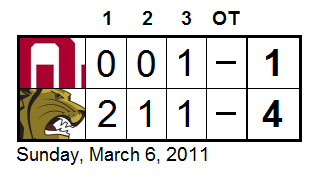 Lindenwood press release // Box score
Given that this one was pretty squarely opposite the Icers game, I'll have to pass on offering any original thoughts. Here are Lindenwood's:

The Lindenwood men’s ice hockey team defeated Oklahoma 4-1 on Sunday afternoon in the quarterfinals of the ACHA National Tournament. This win was the fifth victory over the Sooners this season for the Lions.

Lindenwood jumped out to a 2-0 lead after the first period, thanks to two goals from Grant Gorczyca. The first goal was assisted by Bret Morrell, while the second came from a pass by Jeremy Meletti.

The only score in the second period was netted by Colin Long, who received a pass from Alex Roth.

Meletti got on the scoring sheet, with Gorczyca returning the earlier favor, assisting along with Cory Spradling on the goal. Oklahoma scored a short-handed goal late in the game to lessen the deficit, but it was not enough to threaten the Lions’ lead.

Robi Cavallari stopped 15 shots between the pipes for Lindenwood. The Lions converted two out of seven power plays in the win. 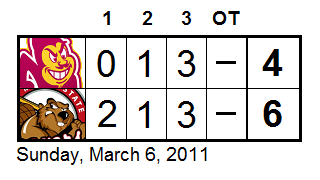 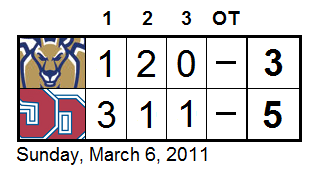 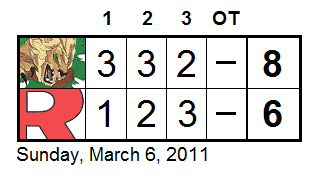