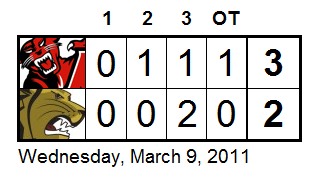 Davenport press release // Box score
What was most striking to me about the 2011 ACHA D1 championship game was how quickly it changed character. For roughly 39:13 of this tilt, billed as a battle of two champions - Lindenwood had won the last two in D1, Davenport the last three in D2 - defense was the order. The Lions retained the form they showed against Delaware in the semifinals, keeping everything to the outside and blocking a ridiculous number of shots in a style that reminded me a little of the last repeat D1 champions, pre-LU (Penn State from 2000-2003). Davenport relied a little more on their goalie, Phil Graveline, but the result was the same: bagels across the board. Not even four Lions power plays in the first 30 minutes or a five-minute one for DU late in the second could change that.

Then all of a sudden, DU's Jonathan Juliano found a crease between three Lindenwood defenders right in front, took a pass from Adam Kuhn, and broke the deadlock with 47 seconds left in the second period. From that point forward, it became a vertical game with chances galore on both sides. LU tied things up with 10:30 to go when Grant Gorczyca's centering feed deflected in off of Panther defenseman Kevin Brojek. DU's Kyle McDowell's wrister just under six minutes later looked like the possible title winner, but Cory Spradling forced overtime with 2:15 left.

In the first overtime ACHA D1 championship game since the Icers completed the Magic City Miracle against Eastern Michigan in 2000, it was pretty easy to see the end coming - the teams were clearly running on adrenaline and fumes, and going furiously up and down the ice. The winner, from Juliano with 4:14 left in the overtime period, wasn't exactly a thing of beauty. On a two-on-one, he had a teammate (I think Jeff Slusser, but it was pretty hard to make out the DU numbers) charging towards the back door, and it looked to me like Juliano might have been attempting to find him. But it was a little off target, and LU goalie Robi Cavallari, attention split between the two possibilities, let it through to set off the celebration.

Congratulations to the Davenport University Panthers, the 2011 Murdoch Cup champions!
﻿