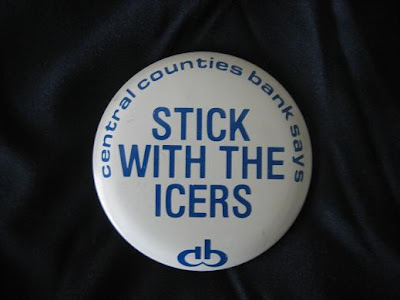 I think most Penn Staters are probably familiar with the "bank buttons" produced for each PSU football game for 38 years and ubiquitously worn on fall Saturdays in State College. If you're not a Penn Stater, here's a quick introduction.


Each fall, Citizens Bank [and Central Counties/Mellon Banks before them] distributes free booster buttons in central Pennsylvania. Every week there is a unique slogan for the upcoming Nittany Lion football rivalry.

Slogans are chosen from fan-submitted entries, and most fans are not professional comedy writers. A few from last football season were "Winners Take Owl" (Temple), "No Greece Lightning Here" (Michigan State) and "We Prefer Punxsutawney Phil" (Minnesota). Yikes.

What many people, Penn Staters included, might not know is that these buttons are also produced for other PSU sports including men's and women's basketball, wrestling, volleyball and hockey - although these just get one button per season, not one for every game. But then again, you may have picked up on that considering there's a picture of an old hockey one at the top of this post.

How old? 1981-1982, which I know thanks to this site that is dedicated mostly to documenting the football buttons, but also includes a page on the other sports. It's the second ever in the hockey series - the first said "The Ice Is Back...Back The Icers" to commemorate the opening of the Ice Pavilion in 1980-1981.