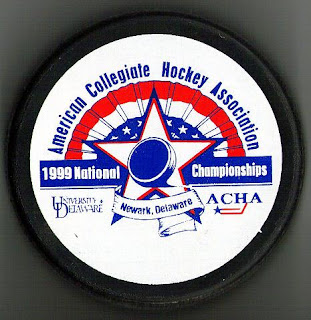 With the ACHA National Championships getting underway Saturday, I thought it would be a perfect time for this one - a look back at the other time Delaware hosted the national championships, 1999. As I'm sure you know by now, I'll take my Payday Memorabilia with a theme, thank you very much.

Information about this tournament has gotten sparse in the ensuing 12 years (it was like three ACHA websites ago, after all), but here's what I think I know about it.
I'll leave this post with this logo for this season's tournament. The caption gives away why.