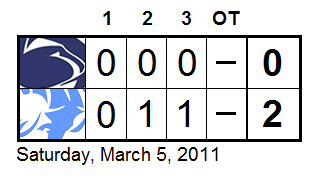 Collegian summary // Collegian recap
Onward State recap // VFTB recap // Black Shoe Diaries recap
Team press release // Box score
This will be a pretty short post, just because I'm completely out of gas after a day full of watching hockey, I'm still upset about the game, and the internet in my hotel is slower than a health bomb on a D3 team. You don't want to read that much about it, I'm sure. Besides, what am I supposed to say? "Boy, I hope we get that power play straightened out for next week!"
I've been following Penn State hockey for quite a while, but one thing I've never gotten used to is the finality of the ACHA national tournament. We start in October and plow through 30 to 35 games until the end of February. There's an ebb and flow to each game, groups of games, and the season itself. Sometimes it all goes by quickly, sometimes not, but either way, one quick game ends all of it once the calendar turns to March. Sometimes, it's sudden death, like last year against Central Oklahoma. Sometimes it's a slow bleed, like the championship game against Oakland in 2007. But either way, it's one game that lays waste to months of work.
Any time you lose a close game, you always think back to the missed opportunities, but this game featured missed opportunities of a particularly excruciating variety.
I haven't even fully discussed the Icers' three consecutive power play attempts in the first half of the third period, and I won't. It all adds up to mean that Shawn Tingley's second period rebound goal held up as the the winner in what was effectively a 1-0 game. He's a great player and Rhode Island has a great defense and great goaltending - I guess ultimately you'd rather lose to a good team than get shocked by scrubs.
Epitome of my day as a Penn Stater - this conversation between me and some random guy during the second intermission of the Delaware-Robert Morris (IL) game.
Him: HEY! PENN STATE! I GO TO PENN STATE!
Me: Shitty game, eh?
Him: I don't know man, I think we can take the whole thing! Are you a coach?
Me: No, it's just a sick jacket.
Him: I don't know man, you look like a coach.
Me: I'll send in my resume.
Then he started talking about wrestling, how good Penn State is at it, and how he would've wrestled at Delaware if they hadn't dropped the sport. I can't stand wrestling, no matter how good we are at it, so I pretended to get a text message and left.
Anyway, Robert Morris (IL) looms in the 11th place game tomorrow at 5:00, and while the game is purely for pride, here's hoping we send out this season and these seniors with a win against a quality team.
Other Games
﻿

I'm going to start with the other games in the better of the two rinks. Yes, I'm talking about Gold. Better hockey games, better cell reception. Those two things make me happy. 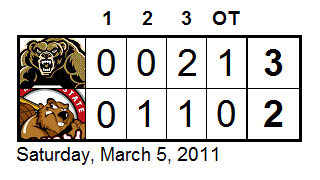 Oakland press release // Box score﻿
Amazingly, the only overtime game of the tournament so far, after last year's OT fest. ﻿Here's the Oakland side of things:

The Oakland University Golden Grizzlies hockey team has advanced to the second round of the 2011 ACHA Men's Division 1 Championships with a 3-2 victory over the #6 Minot State Beavers. Junior forward Jordan MacDonald sent the Beavers home when his deflection from in front of the goal beat goaltender Wyatt Waselenchuk. MacDonald deflected a shot from defenseman Jacob DeSano after he walked the blue line after receiving a pass from Kevin Kranker.

The Grizzly offense came to life finally in the third period when MacDonald's shot from the top of the circles found the back of the net. Kevin Kranker and Adam Novack were credited with the assists. Then with just over four minutes to go Novack fired a bomb that Waselenchuk only got a piece of to give Oakland a late 2-1 lead. DeSano and MacDonald netted the assists. Minot State refused to give in however, as Kale Dolinski's second goal of the game with just 64 seconds left tied the game at two. 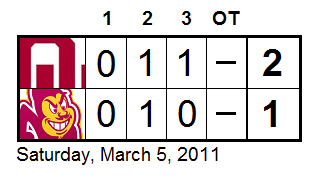 Box score﻿
I didn't see a second of this one, because it wasn't on TV at the California Tortilla, which needs to get in Ohio ASAP. ﻿Sue me for not eating rink hot dogs for dinner. And it figures that the game I miss ends up being a pretty good game, and with no outside account of the events.
Me discovering the place that's apparently called Cal Tort for short > you knowing about this game. Sorry, it's pretty good. 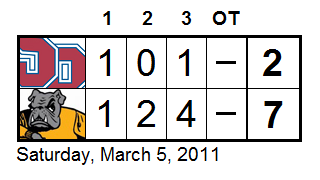 Adrian press release // Box score
People are probably going to roll their eyes at this score and write it off to your typical autobid game, but that wasn't the case at all to me. A game Stony Brook, behind the goaltending of Josh Brand (no relation to Icers assistant Josh Hand) and Wesley Hawkins' power play goal 23 seconds into the third period, cut the lead of the heavy favorites to 3-2 before the roof caved in on them. ﻿History, however, is written by the winners, so...

The Adrian College ACHA DI team advanced in the National Tournament with a 7-2 win over Stony Brook. The Bulldogs are now 30-8 on the season.
Adrian's Jared Semple got the scoring started early netting a goal at 16:33 of the first period. Stony Brook would add a power play goal with just over two minutes left in the period as the two teams were tied 1-1 at the end of the first period.

The second period belonged to the Bulldogs as goals by Cody King and Shamus Finnerty put Adrian in the lead 3-1 going into the final period.

The Seawolves scored their second power play goal of the game just 23 seconds into the third period to pull within a goal. The Bulldogs refused to let Stony Brook get any closer as they held Stony Brook scoreless the rest of the period while netting four of their own. Kevin Sunde netted Adrian's fourth goal midway through the period before Alex Norman scored the Bulldogs first power play goal of the game at 6:47 of the third. Jack Goodell added a goal 1:10 later before Semple netted another goal to finish off the scoring for the game. 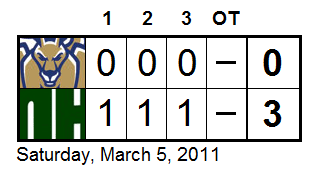 Ohio press release // Canton press release // Box score
Admittedly, I ﻿didn't see a ton of this one, but the parts I did see didn't leave me feeling very good about picking the Bobcats to win the whole thing. While OU didn't exactly steal it, they were by far the better team, Canton was able to counterpunch on occasion, they drew penalties, and of course got some great goaltending. Here's how the Canton people saw it:

Senior Jimmy Merrow (Plainsboro, N.Y.), an all-ECHL First Team selection, had another stellar outing between the pipes in the national tournament as he stopped 48 of 51 shots against the Bobcats, who entered the tournament averaging 5.4 goals per game.  Merrow turned aside 51 shots in last year’s opening round game against Penn State.
The Roos, who surrendered a goal in each period, had several terrific chances to get on the board with the man advantage as Ohio was whistled for nine penalties.  The Roos have converted 23.5 percent of their power play chances this season but were denied on Saturday by a strong Bobcats defense.  The Roos had one five-on-three advantage in the second period and one more in the third, but couldn’t solve Bobcats’ goalie Blake MacNicol, who recorded his nation-leading fifth shutout of the season. 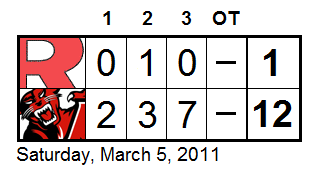 Davenport press release // Box score
All that needs to be said: 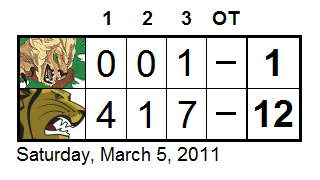 Lindenwood press release // Box score﻿
I didn't get a picture of the Lindenwood team bus, sorry about that. 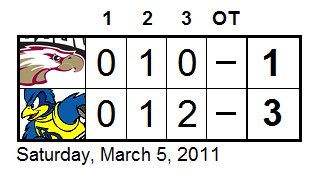 ﻿
Delaware press release // Box score
Just to get this out in the open, with Penn State eliminated, ﻿I'm taking up for the Blue Hens. I've never been one to buy into the whole "root for your conference" thing, but I can't see an all-ESCHL final as a bad thing. Who are you rooting for now? OU? Lindenwood? That's what I thought.
So with that in mind, I liked what I saw from UD tonight. They have that definite home-ice swagger going for them, and for the vast majority of the game, they took it to a pretty decent Robert Morris (IL) team. But then they got in some penalty trouble, with calls to Brandon Weiner and Zack Reubel giving the Eagles a long 5-on-3, where Nick Fina capitalized.
It could have been a backbreaking goal, as just before the penalties, Delaware had more close calls on the other end than I can count. If RMU carried that lead into the second intermission, it might have been disastrous, momentum-wise. Dave Lombardi singlehandedly put an end to all of that crazy talk with the best goal I saw today. While killing another penalty, he came hard on the forecheck, created a turnover, passed it out to Nick LePore, got it back in front of the net, and finished with a twisting put-away that I can't accurately describe.
Anything to add, Delaware website?

Freshman Mike Piet (Robbinsville, NJ) was able to crack the deadlock with just 4:23 left to play as he snuck a quick wrist shot between the pads of Venet giving the Hens a lead they would not relinquish. Freshman Christian Tasker (Wilmington, DE) iced the victory for Delaware, putting an empty net goal away after an unselfish pass by fellow freshman Mark Zeszut (Wilmington, DE).