Well, there you have it, a whole season down to the championship game everyone predicted but nobody outside of supporters of two schools wanted to see. Wednesday night, 7:00 p.m., Fred Rust Ice Arena, FastHockey.com, if you don't know it by now. 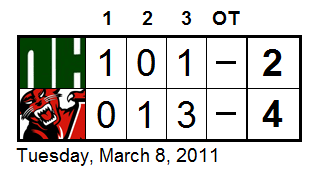 Ohio press release // Davenport press release // Box score
I missed the last two periods of this one to go take a midterm (I do other things besides this, believe it or not), so I'm not quite sure what happened. It looked to me like OU's style won out in the first period, as they were getting pucks low and getting into meat grinder mode (incidentally, I think Dan Morris deserves a lot of credit for successfully adapting their style to the Olympic ice). The payoff was a goal on a disgusting passing play finished by Billy Hemann from Tyler Pilmore and Michael Schultz - one sure sign that the Bobcats were clicking. It was a similar goal against Oakland that prompted me to retract my "not good enough to win it all" declaration I made after their opening round game with Canton.
Based on what I've been able to pick up, it sounds like the extremely talented Panthers simply picked their spots and took advantage of their power play as well as some shift-after-a-goal softness, but I'll let the Ohio recap fill it in from the first intermission.

The pace remained the same in the second period, and once again, brought only one goal-this time for Davenport.

Sean McWhorter notched the lone goal of the period on a power play. Jeff Slusser and Brit Ouellette set up the tally.

With the scored tied heading into the final period, it became a battle of attrition as both teams looked to capitalize.

Davenport broke the tie nine minutes into the period when Sean McKenzie lit the lamp. Phil Wendecker assisted on the play.

Just 15 seconds later, the Panthers attacked again on a slap-shot from Bo Jacobs.

Down 3-1 and on the power play, Ohio won the face-off in the Panther’s zone. Steve Osacky found Zack Barbis who relayed the puck to Schultz who blasted the puck into a wide-open net to cut the deficit to just one.

With time winding down and goalie Blake MacNicol pulled in favor or an extra attacker, the Bobcats couldn’t find the goal before Matt Morang hit the empty net to send Davenport onto the championship game.

Ohio limited the Panthers to just 17 shots. Davenport combined for over 100 shots in their previous two games. The Bobcats countered with 29 shots. 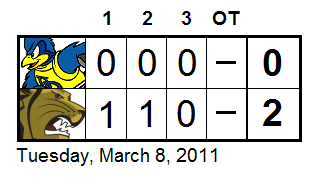 Delaware press release // Lindenwood press release // Box score
This game was frustrating for me to watch, and not just because I had adopted the Blue Hens following the Icers' elimination. Simply put, I felt like Delaware played the game they needed to play to pull off the upset, but it just didn't happen for them. Two breakdowns - one where Colin Long did his Bobby Orr thing that he tends to do sometimes late in the first, and an absolute backbreaker late in the second when Cory Spradling put back a rebound - was all the opening the Lions needed to propel themselves into the finals.

But all in all, it was a great effort from UD. They shut down the Lions and controlled the play territorially for large chunks of the game. On the broadcast it was said that they didn't get the puck inside enough, and I suppose that's a valid point, but they had chances nevertheless (Michael Piet and Ryan McDonald with maybe the best of them) and with a couple different bounces, it's a different game. Credit Lindenwood for being good in their own zone and credit LU goalie Robi Cavallari for turning aside all challenges - they're not the two-time defending champs for nothing. Taking a quick look UD's roster and the small senior class, I would not be the least bit surprised to see this game happen again next year.

Was that too Delaware-centric? Too bad. Here's some of the Lindenwood recap to balance it out a little.


The Lindenwood men’s ice hockey team shut out Delaware 2-0 on Tuesday night in the semifinals of the ACHA National Tournament in Newark, Delaware. The win advances the Lions into the ACHA Division I Championship Game.

The game did not have any goals until five minutes were left in the first period, when Colin Long put the Lions up 1-0, with assists from Bret Morrell and Robi Cavallari.

The only other goal of the game came with less than two minutes left in the second period. Cory Spradling gave Lindenwood a two-goal cushion with his score that was assisted by Grant Gorczyca and Steve Balint.

Cavallari stopped all 24 shots that he faced in goal for the Lions to earn the shutout.