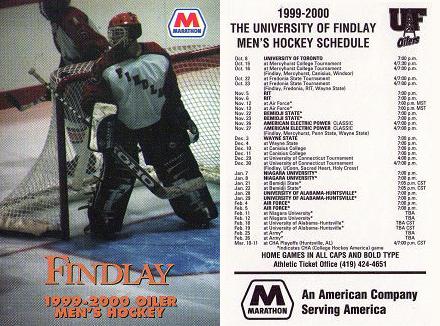 Findlay? What's that? Well, other than being a pretty inconsequential university of about 5,000 students in northwest Ohio, for a brief time it was also a big-time hockey program. Really. I mean it.

The school started at the Division II level in 1996 and had some success, going 23-5-0 in 1998-1999. But when the NCAA decided to discontinue the DII championship following that season due to the small number of schools at that level, it forced the ones that did exist to make an important choice: play up or play down.

Former DII schools Findlay, Alabama-Huntsville and Bemidji State went with the first answer. They joined with Division I independents Air Force, Army and Niagara and new program Wayne State to form College Hockey America, a Division I conference, for the 1999-2000 season (WSU officially joined in 2000-2001).

So you're the Findlay Oilers, and you decide to host a tournament Thanksgiving weekend of your first DI season. Who do you bring in to move the needle and generate some interest in your fledgling program? Surely not a future conference opponent, one from the other mid-major DI conference and an ACHA team, right?

Oh, okay.
Now that you've figured out why I'm talking about Findlay, I guess I should point out that the Icers acquitted themselves quite well in the AEP Classic, ﻿losing 6-2 to Findlay in the opener before defeating Wayne State 5-2 in the third-place game.

"It was an emotional locker room after the game," [Joe] Battista said [following the Wayne State tilt]. "This ranks among the top three or four wins this program has had since I've been here."

[Mark] Scally, who had 34 saves Friday, made 46 saves Saturday. [Rob] Shaner, who had two goals in each game, made the All-Tournament team.

We know where Penn State's saga goes from there, but what of Findlay and Wayne State? Well, in sort of a crazy twist, PSU's the only one of the three with a Division I program in 2011, as the former measuring sticks dropped men's hockey in 2004 and 2008, respectively (Wayne State still has a women's program). Findlay departed having never won more than 11 games in DI and faded back into obscurity just as quickly as they had burst onto the scene, making a sudden announcement over halfway through their final season.

Wayne State had a little more success, winning four CHA regular season or tournament titles, and even making an NCAA tournament appearance in 2003, the first year the conference had an autobid. In their first season, about a month before the loss to the Icers, the Warriors lost a tight 3-2 decision to St. Lawrence - who ended that season in the Frozen Four. Still, they ultimately suffered the same fate as Findlay, for the same financial reasons.

The CHA itself is also gone, a victim of its large geographic footprint and the budgetary issues that resulted. Army jumped to what is now Atlantic Hockey after just one season. The other NCAA hockey-playing service academy, Air Force, joined them in 2006, just after Derek Schooley and his new Robert Morris program stepped in to replace Findlay in 2004. However, following Wayne State's departure from the scene (to go with the pending loss of the conference autobid due to having fewer than six teams), the remaining programs wisely sensed the end for the CHA and decided to find other conference arrangements. Niagara and RMU joined Air Force and Army in Atlantic Hockey while Bemidji State got into the WCHA. The CHA folded after last season, leaving Alabama-Huntsville in the pretty tough spot of having to make do as the only DI independent after they were rejected by the CCHA.

Want to full-circle this puppy? Check out what USCHO had to say when the CHA's foundation started to crack, circa 2006:


The loss of the CHA could accelerate the possibility of a Big Ten hockey conference. Depending on your allegiances and regional affiliation, this is either an exciting development or a terrible omen. If CHA teams were to be absorbed into existing leagues, college hockey ends up with as many as 59 Division I teams packed into five conferences, some of which would have as many as 14 members.

That gridlock could stoke the fire beneath the always-bubbling pot of a Big Ten league, which would potentially be composed of Michigan, Michigan State, Ohio State, Minnesota, Wisconsin and a sixth team like North Dakota, Penn State (which would have to move up to varsity from club status) or Notre Dame.

Since most of those schools are consistent NCAA tournament contenders (with Notre Dame back on the rise under new head coach Jeff Jackson, and Penn State potentially able to bring muscle to a new varsity program), the move would create a superconference that would wield extra power at the highest levels of the NCAA management structure. That’s because the Big Ten, unlike current Division I hockey leagues, is a multisport conference with a strong national profile.