This is a little bit of a preview of what I'm going to try to do with the as-yet-unnamed Collegian archive series that will replace Head Coach Candidate once we make the hire in the next 4-6 weeks or so and I stop that series. I wanted to do this one now for obvious reasons.

The Frozen Four: North Dakota, Michigan, Notre Dame, Minnesota-Duluth. For a Penn Stater, is there much of a reason to care about any of these schools? You have the Fighting Whatevers, college hockey royalty that lacks appeal to any right-minded underdog supporter. UMD is a pretty anonymous school if you don't follow college hockey. Michigan is a future conference rival, so you can take up for them if you're into that sort of thing, but...they're Michigan.

So what about Notre Dame? Sure, there's that immediate distaste that comes to mind, the result of generations of domers who smell their own farts. But at the same time, there's a Penn State connection in play, which might make the Irish a little more palatable as a rooting interest.

Those familiar only with ND's football tradition might be surprised to know that their hockey tradition isn't quite as glamorous, despite their recent rise to the top echelon under Jeff Jackson. After a few years of informality, the program officially started in 1968 and never won a conference title or appeared in the NCAA tournament until 2004. In between, they even dropped from varsity status and played in the CSCHL for a year due to financial considerations, 1983-1984. That's where the Icers come in.


So what happened with those games? Well, we chipped off a point from the once-and-future varsity program, which isn't bad I guess.


In case you're wondering, Notre Dame finished 22-6-1 that season as a club team, losing to Iowa State in the finals of the CSCHL tournament. 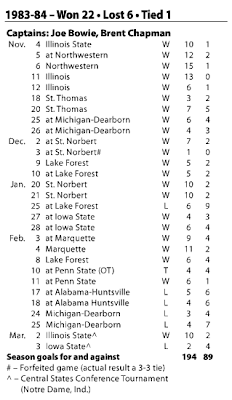 Interestingly enough Alabama-Huntsville, then a CSCHL team, didn't participate in the conference tournament, despite winning the regular season title with a perfect 18-0-0 mark. They were busy playing in their own fake national championship tournament, which (obviously) didn't even include the tournament champions from their own conference or a Notre Dame team that was probably more deserving than either of the at-large teams invited to the Von Braun Invitational. Meanwhile, PSU won the real 1984 national championship, from the tournament that didn't die off in the late 1980s, a week later.

Relax Chargers, just a little friendly junk. If anything, the evidence from this suggests that you had the better team in 1983-1984 - note ND's results versus UAH and PSU.

As for the Irish, even after regaining varsity status the next season, Notre Dame played as an independent and continued to schedule non-varsity powers like Iowa State, Michigan-Dearborn, North Dakota State and Arizona as they attempted to regain traction (and no, they didn't always win). This continued through the late 1980s, and the Irish were ready to re-join the CCHA - the conference they left in 1983 - in 1992. Part of this process was Penn State's return trip to South Bend for ND's first games "back" to open the 1984-1985 season, which went even less well than the games from the previous season. 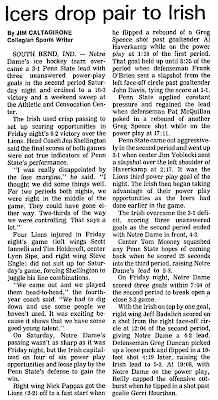 While the Icers have played schools like defunct Wayne State and Findlay (more on that later this week), Robert Morris, UConn, Holy Cross and a bevy of NCAA DII and DIII schools, to the best of my knowledge, this is the only time PSU has played a major-conference DI program since the 1940s, even if they weren't one at the time.

Is a four-game series history enough of an incentive to care about the Frozen Four, even if PSU was 0-3-1 in those games? Enough to make you want to see Notre Dame win a national championship? Maybe not, but at the same time, a team that once tied the Icers is two wins from the NCAA national championship 27 years later. That's kind of cool.

Update 9:55 p.m.: Steve Penstone reminded me that he called eight games for the Irish back in 2006-2007, including, if I'm not mistaken, one where ND lost to Robert Morris. Yeah, I'm getting another cheap Derek Schooley plug in. So even if you think my argument's stupid, do it for Steve! Or Christian Hanson! Or...okay, that's about all I have.
Posted by Kyle Rossi at 9:24 PM