For this season finale of Breakout Past, I couldn't think of a better topic than the buildup to men's hockey acquiring varsity status in 1940, along with the first varsity game played by the team. Seems appropriate, right? As always for these posts, click to enlarge the articles for easier reading.

Calls for Penn State to recognize hockey, of course, go back more than 100 years and, other than the understandable hiatus during World War I, were more or less a constant during the first four decades of the 20th century. After numerous aborted attempts at starting a team and/or constructing a rink, in late 1937, an informal team consisting largely of Sigma Pi fraternity brothers organized under coach Al Hook and played its first game against Pittsburgh on February 22, 1938, losing 4-0 at Duquesne Gardens.

While that was the only (known) game played that season, the formation of a team kicked things - including the rumor mill - into overdrive, as reported on October 11, 1938 (left side, below). 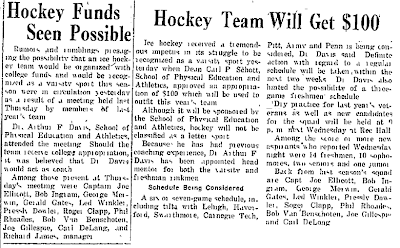 Three days later (right side, above), it was evident that the rumors were misinterpreted, as rumors so often are. Hockey was not given varsity letter status for the 1938-1939 season, although the informal team did receive $100, "which will be used to outfit this year's team." It seems likely that the funds were used to purchase the familiar (at least to history geeks) "PS" sweaters - according to the January 10th, 1939 Daily Collegian, "new uniforms for the squad have arrived. The jerseys are white with blue shoulders and sleeves."


The team went through the usual scheduling and ice availability struggles that season, eventually finishing 1-3-0 in four known games after several others (including winter break tilts with Cornell and Syracuse and the planned debut of the new jerseys against the Mountain Beach Club in Williamsport) were called off due to weather conditions. Nevertheless, Dr. Carl P. Schott, dean of the School of Physical Education and Athletics, "suggested the sport's becoming fully recognized" at a post-season banquet, as reported in the March 31, 1939 Daily Collegian. A Collegian editorial writer that December was a little more forceful in expressing himself. 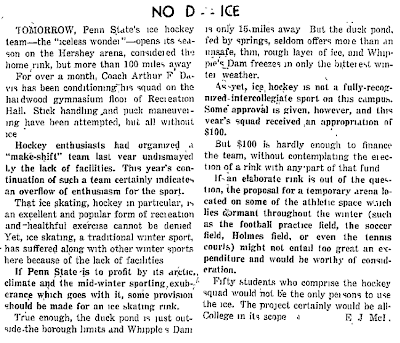 As indicated, the team again received $100 for the 1939-1940 season, but still something less than "full approval," to borrow the article's choice of words.

It's impossible to ascertain that editorial's influence, but within a week, it was reported that the All-College Cabinet had formed a committee "to investigate College recognition of the ice hockey team." The All-College Cabinet, instituted in 1939 after an overhaul of student government, "functioned as the legislative branch and consisted of the presidents of each of the classes along with representatives from the Athletic Association, the Penn State Christian Association (formed by combining the campus chapters of the YMCA and YWCA), the Interfraternity Council, a new Independent Men's Council, and a few other large student organizations."

The involvement of the student-populated Athletic Association in the All-College Cabinet, and by extension the committee, is noteworthy. The students, who controlled most aspects of athletic administration in the early days of PSU sports history, eventually surrendered the "grown-up stuff" to a branch of the AA controlled by, well, grown-ups.


The alumni-dominated Athletic Advisory Committee, created during the reorganization of the Athletic Association in 1908, within a few years came to exercise nearly undisputed authority over the hiring and firing of coaches, the creation of schedules, and most other phases of athletic policy.

In 1931, the School of Physical Education and Athletics (headed by Schott from 1937 after he replaced the notable Hugo Bezdek, father of numerous rink schemes in the 1920s, among other things) took on oversight responsibility for the operation. Both students and the Athletic Advisory Committee, however, did retain power over many important matters.

Varsity Status - With A Catch

Even before the Nittany Lions finished their 3-8-0 1939-1940 campaign in the Pennsylvania Intercollegiate Hockey League, the Athletic Advisory Board reviewed a varsity application by the hockey team and, after a deliberation that possibly included consideration of the All-College Cabinet committee's conclusions, decided to support it on March 2, 1940. 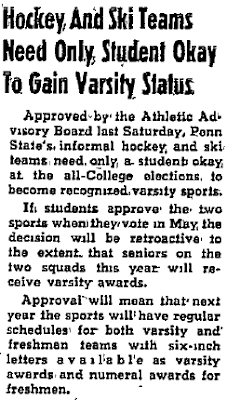 The student side of the Athletic Association's vote, conducted May 13th, 1940, was not particularly contentious. However, I would like to know if any of the 35 no voters are still alive today, just so I can find him/them (AA members had to be men at the time) and say "WTF bro" to his/their face(s). 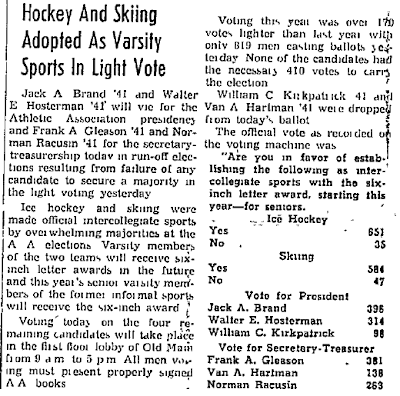 The "light vote" comment may have been in consideration of the fact that Penn State had 6,514 undergraduates in 1940 (I have no idea how many were men). As mentioned in the previous two articles, letters were also awarded to senior members of the 1939-1940 team.

Despite varsity recognition, the hockey (and ski) teams were still forced to operate somewhat informally during the 1940-1941 season. As reported in the February 13, 1941 Daily Collegian, those two teams "are still making their own schedules, planning their own trips, and handling their own financial matters." Why the awkwardness? "When the two teams applied last year for college recognition, all they asked was the College approval plus varsity letter awards...this the College okayed, also stating that the Association could not budget any money during 1940-41 for the teams, but would help them out as much as possible." "As much as possible" ended up involving an appropriation of $350, supplemented by a 25 cent admission charge to games. This money helped pay for reported $50 (on average) guarantees to opponents as well as for new equipment.

That situation was rectified before the end of that first season, when the Alumni Advisory Board pledged full support for hockey during their meeting at the Nittany Lion Inn on February 22, 1941. At that point, the AA took over all administration, and the admission charge (which had been somewhat controversial, as other varsity sports were free to students at the time) was dropped.

The 1940-1947 varsity era's first game took place in Johnstown on December 6, 1940 and was a 3-1 victory over Carnegie Tech (now part of Carnegie Mellon University, of course). Here's the Collegian's write-up. 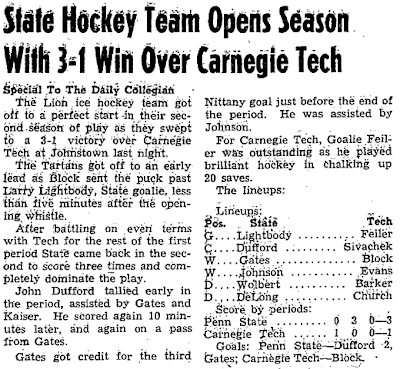 I'm not sure 20 saves on 23 shots qualifies as "brilliant hockey" on the part of the Tech goalie but hey, pumping the opponent only makes us look better, so have at it. Also, it should be about the least surprising thing ever that John Dufford scored the first two Nittany Lion goals in the history of PSU varsity hockey. He was quite good.

The puckmen also won the next three games en route to a 6-3-1 final record. It would ultimately be PSU's most successful varsity season, both in terms of winning and in terms of managing to complete scheduled matches.

Shaffer Ice Palace, the site of the lightly-regarded but significant occasion, is an interesting side story in and of itself. According to one account, Frank Shaffer and his Shaffer Ice Company was the area's dominant maker and distributor of ice. But when artificial refrigeration became widely used by consumers and made his business obsolete, Shaffer decided to use his expertise to build an ice rink. The precise date of construction is unknown, although it was referred to as "new" by the Collegian both before and after a February 16, 1940 game against Duquesne.

Between that game and a January 17, 1942 contest with Carnegie Tech, Penn State played eight of 16 games in that rink (two games during that span have unknown locations and could have been played at Shaffer as well). For all intents and purposes, it was PSU's primary home for a brief time.

The Ice Palace also hosted the Johnstown Blue Birds, which played the 1941-1942 season in the defunct Eastern Hockey League. The link in the previous paragraph contains a story describing how Blue Birds owner Pick Hines was inspired to locate his team in Johnstown by a packed barn for a game involving Penn State.


Early in the fall of 1941, Memorial Hospital’s Junior Auxiliary hosted a hockey game between Pitt and Penn State. Neither school had an official ice hockey team [Note: Untrue, as we've just seen]. The game between two hastily assembled squads was not hockey at its finest level.

The auxiliary had, however, sold 1,100 seats, and the Ice Palace was filled to capacity.

I'm a little skeptical of the accuracy of this for one very simple reason: the Blue Birds played their first game on November 11, 1941 and Penn State didn't even hold an organizational meeting for that season's hockey team until the next day. It's entirely possible that the game described involved Penn State students, and possibly even members of the hockey team (see: "hastily assembled" and "not hockey at its finest level"), but it's extremely unlikely that it was a game that should be counted in any recordkeeping endeavor.

The Blue Birds went broke after that one year, and "soon after the hockey season, the Ice Palace was converted for use as a manufacturing plant, and winning a war, rather than hockey games, was the priority." By the time Johnstown regained professional hockey in 1950 - in the form of the Slap Shot-famous Jets - the Cambria County War Memorial Arena had been constructed.
Posted by Kyle Rossi at 3:00 AM