Terry and Kim Pegula will serve as Grand Marshals for Penn State's homecoming parade next month, an announcement made at the First Annual Homecoming Night 5K Monday evening. The news was first reported by Onward State - here's their initial post in its entirety.

Pegula, the owner of the Buffalo Sabres, originally donated $88 million to the Men’s and Women’s hockey programs. A majority of that gift is being used to construct a state-of-the-art hockey venue, which will be named the Pegula Ice Arena. At the groundbreaking in April, he increased his donation to $102 million.

This year, Homecoming Week will begin on September 29th and conclude on October 6th as Penn State takes on Northwestern.

It's noteworthy, but obviously a coincidence, that the October 5th parade will pass by the construction site of the ice arena that bears the Pegula name as it enters central campus via Curtin Road. Here's the full route of the procession, which begins at 6:00 p.m. 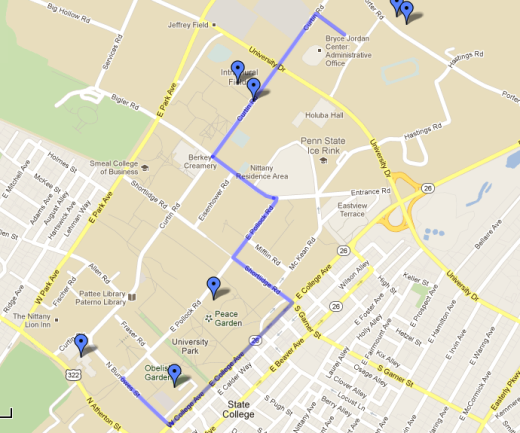 The Pegulas follow 2011 Grand Marshal Adam Taliaferro, a former Penn State football player and current member of the Board of Trustees and 2010 Grand Marshal Allison Baver, a Penn State alumna who won a bronze medal in speed skating at the 2010 Winter Olympics.
Posted by Kyle Rossi at 8:13 PM