Army's Black Knights will oppose Penn State in the highly-anticipated Pegula Ice Arena opener on October 11, 2013, according to a Penn State student's senior project (PDF link) based on the venue's construction. The assignment is the work of Shane Marshall, an architectural engineering major specializing in construction management.

The bombshell appears quite innocently on page 24 of the 44-page document where, in Appendix A of the report, a PIA project schedule summary is laid out. Here's a piece of that page: 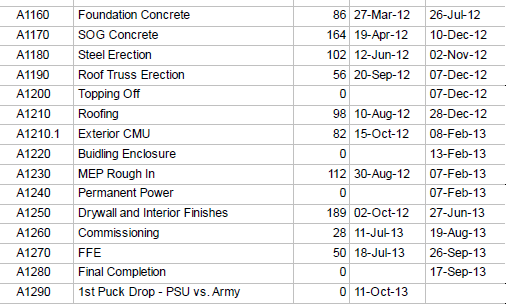 While the need to include the arena's first hockey game in the schedule is obvious, Marshall spells it out on page four.


The project schedule is ultimately being pushed by the ice arena home opener October 11, 2013. This is the first men’s Division 1 hockey game to be played in this state of the art collegiate facility. The penalty for delay was not disclosed but this is a must hit target date. Therefore, main components for the building are to be erected before August, which would allow for enough time to commission and furnish the building.

In examining Marshall's work, it clearly seems to be a well-researched report that deals in realities, not hypotheticals. His information comes directly from those who designed and are building the arena. From the executive summary:


This report was completed by reviewing construction documents, specifications, estimates, schedules; and was accomplished through discussions with Mortenson, the construction manager, and Crawford, the architect.

The other remaining schedule items are interesting in and of themselves as well. Notably the roof truss erection, scheduled to begin on September 20th, actually began on Thursday, the 27th. The fact that things are a week behind isn't really surprising when considering some of the unexpected issues that have confronted Mortenson.

Regardless, three weeks of buffer zone were built into the schedule, meaning that it's unlikely to become an issue down the road. As you can see, the next major construction events will be the topping off in December (which, appropriately, coincides with the end of roof truss erection) and completion of the roofing three weeks after that.

The entire report is interesting reading, and I would encourage at least skimming it. But let's shift back to that first game.

Army might seem an unorthodox opponent to the uninitiated. Why devote such a historic event to an Atlantic Hockey opponent, and not a particularly strong one at that? Why not work something out to allow conference games against Michigan or Ohio State to open the building? Why not a giant of college hockey like Boston College? Why not Notre Dame, a well-known brand name and Joe Battista's second-favorite school? Why Army? 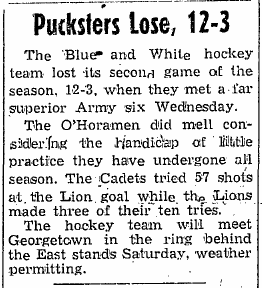 Yep, the 1940-1947 varsity team played Army. Twice, actually. The first meeting, on February 26, 1944, resulted in an 18-3 loss. The brief article above recaps the February 12, 1947 game - the second-to-last ever played by that team (the final opponent was Georgetown which, at present, only has ACHA Division 2 hockey). Army is one of just three active NCAA Division I teams played by PSU's first varsity team, along with Cornell and Colgate.

Unlike the latter two, the Icers also had a history with Army. On March 6, 1982, Army beat PSU 10-3 at the Kent State Invitational Tournament, while November 21, 1980 brought a 6-4 Icers loss at West Point (Army records omit that game as an exhibition).*

* Sorry for overwhelming the varsity history by pointing out that the Icers were somewhat more competitive against Army.

So it's against that historical backdrop, which by then will include this season's game at Tate Rink as well, that the Nittany Lions will battle Army next October. The service academy aspect is a nice touch as well, and should help maintain a positive, respectful atmosphere for the battle between what will be a second-year DI program and a program that's been in DI since there's been a DI. Can't wait.
Posted by Kyle Rossi at 4:11 AM